My experience with the doomed Surface-class tablet

Well, not the Microsoft version. With a starting price of over $1000 here in Canada, it is way too overpriced. And the Pro 3 is misleadingly-hyped. I mean, why call it a laptop when the price excludes the keyboard?

I saved some money buy buying the Sony version, the Tab 11, reconditioned off eBay. $500 included the keyboard and interactive stylus. Unlike the Surface 3, however, there is no way to attach the keyboard to the tablet, laptop style. (Magnets hold the keyboard -- like a cover -- on the face of the tablet for recharging the Bluetooth keyboard and for storing it.)

My friend Don was visiting from California last week, and asked why my favorite toys were that I'd bought since we last saw each other a year ago. "None," I replied. I'd have to go back two years to when I got the Asus TF101 Transformer tablet (with detachable keyboard); it's amazing.

Surface-class tablets remind me when HP made Windows CE-based PalmPilot lookalikes under the Compaq name. It was exactly the same situation as today: remarkable hardware hobbled by dreadful software written by Microsoft.

Surface-class tablets run in two modes, like all Windows 8 devices: normal desktop mode, and that awful Metro mode. I call it awful for two reasons: (1) the total flat UI expresses no useful hints to users, so it's hard to know how to interact with the elements; and (2) I need to have an account with Microsoft, and I am getting so tired of battling huge corporations and their greedy collections of my digital life. So I completely ignore Metro. 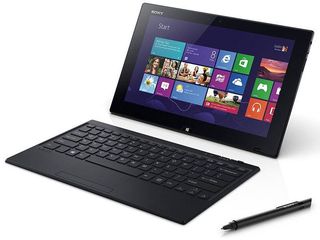 On any Windows 8 computer, I immediately install (1) Firefox to avoid Internet Explorer and (2) Start8 to return the Start menu (and disable the evil Metro face). Once Start8 is in place, I can begin using the computer as it was meant to be used.

So what are the problems I experienced with the Surface-class tablet from Sony? These are some of them:

Touch-Hostile UI.  The screen is 11.5" diagonal, boasting a 1920x1080 resolution. But it is almost impossible to use with finger touches, because the UI elements are so small. I find I have to jab at items repeatedly before Windows registers the touch. (When Android isn't sure what I touch, it displays an enlarged area to make it easier to touch small UI items.)

Microsoft didn't adjust the desktop UI for touch, because it expects me to use the immature Metro interface with its giant rectangles. (Android doesn't have this problem, because version 3 implemented the code necessary for any size of screen.)

Immature Software. Speaking of immature, touch-aware software for Windows 8 is years behind Android in development. For instance, MX video player for Android lets me slide my finger up and down on the left half on the screen to change the brightness, and on the right half to change the volume. An on-screen button toggles between aspect ratios, should the player guess wrong. The volume can be set up to 200%. These are all touches (excuse the pun) that make it more enjoyable to watch movies on Android, but are missing from Metro (and supposedly touch-enabled Windows 8) players.

There is the stylus, but because it does not slide into the unit, it is never around when I need it. So, it goes unused. (Because of the mania of making tablets thinner, the body is too narrow to hold a stylus inside of it.)

Brain-disabled Keyboard. Almost as painful as Windows 8's insensitivity to touch is the onscreen keyboard. Now, after 20 years of using PalmPilot and Android tablets, I am used to the keyboard appearing when needed, as needed. In contrast, Steve Sinofsky and his underlings designed the desktop mode Windows 8 to deliberately not display the keyboard when needed. It was all part of that we'll-force-'em-onto-Metro bandwagon.

Each time I need to enter text, even if it is a single character, I have two more taps: one to bring up the keyboard, and another to make it disappear. The keyboard is enormous, taking up half the screen. This means it inevitably covers up the text field in which I am attempting to type. (The option for making it "smaller" reduces its width by a mere quarter-inch on either side.)

It doesn't have to be this way. Google wrote Chrome Web browser so that the onscreen keyboard appears when needed. Microsoft could do the same, but doesn't feel like it.

Disconnected Keyboard. With Surface Pro 3, Microsoft clued in that keyboards need to be firmly connected to the tablet, in order to be usable. I discovered this when I took the Sony on a business trip. HP didn't provide any tables at their press event, and so this Surface-class tablet with its non-connected keyboard was a no-go on my knees. Well, an utter and complete failure, actually.

This explains why I was reduced to watching movies on the Sony, the only thing it was good for. Well, not even. The wonky screen and bad video player interface made me return to my Android tablet for this important task.

Dreadful Office. I bought Office 2013 for the tablet. I figured $130 for Word, PowerPoint, and Excel was pretty good, considering that two decades ago they were $500 each. I normally use Atlantis for my writing, but in my line of work I need to be compatible with clients who use Microsoft products.

Office 2013 is more touch compatible than Windows 8, featuring an oversize user interface.The problem with making the UI elements big enough for fingers is that fewer UI elements can be displayed. Lots of buttons need to be on the screen for efficient word processing.

And it is a disaster when used with the keyboard. Naturally, I'm going to use the physical keyboard when writing. But Office 2013 insists on bringing up the on-screen keyboard -- randomly. As I am typing, half the screen is repeatedly obscured by the on-screen keyboard sliding into place. Should I label this function "dreadful", "brain-dead", or just plain "ignorant"?

Ignorant Recycling Bin. I wrote about this problem in an earlier blog post, the bug in Windows where it won't place erased files in the Recycling Bin when they come from a memory card plugged into computers. The only expansion for Surface-class tablets is a single microSD slot, for which I bought a 64GB card. I put there all the "library" files (docs, music, movies, etc) and program files. To recover files, I have to use a third-party app.

The reason I place so many files on the external SD card is because of the heavy load Windows places on the solid state drive's capacity. The tablet comes with a 128GB SSD drive, but over 60GB is used up by Windows. (To think that Samsung owners complain when its version of Android takes up 6GB of "disk" space.)

Failed Kobo Implementation. I use Kobo for my ebook reading, and the company now has a really great reader for Android. But on Windows 8, the implementation is a FAIL. The native Windows 8 app usually stalls during the displaying-my-library stage, and rare is the tine that I can get to the ebook itself.

My alternative is to run the Kobo app meant for the Chrome Web browser. Here, it actually works, but with this problem: there is something strange about the Sony screen that makes it hard to read from it: slight movements of my head cause the colors of the screen to change just enough to be annoying.

Proprietary Power Connector. The power connector has a proprietary design, using ball bearings to keep the plug in, yet easily tear away should someone trip over the cord. Problem is, duplicate power supplies are only available from Sony for $100.

Non-functioning Buttons. There are three buttons on the tablet: Power, which I configured to be Sleep; Assist, which just brings up the Sony Assist software, and so is useless; and Windows, which doesn't seem to do anything.

The power supply has a USB power outlet, which is great for charging the cell phone overnight in the hotel room -- assuming I ever take this tablet on the road again.

Engadget's reviewers like to complain about tablets that don't have a 4:3 aspect ratio, but I like the 16:9 ratio on this tablet for reading ebooks: the long portrait size works well for this.

Yah, that's about it. So, I've put it away, a wasted $500 to my chagrin. I'm back to my two-year-old Android tablet. Google understands how to make touch work; given the internal lethergy, Microsoft may never.

Posted at 11:47 AM in The Microsoft Chronicles | Permalink