Solid Edge looking like a Big CAD company in Atlanta 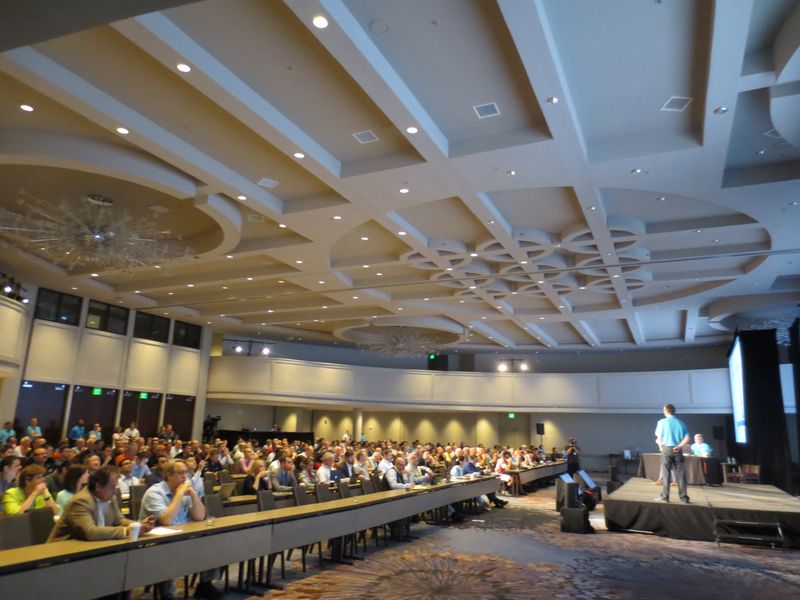 Solid Edge is clearly trying to look like a big CAD company at its third straight Solid Edge University, its annual user meeting and conference which takes place over three full days this year in Atlanta GA.

The event borrows its name from Autodesk University, the mother of all CAD events, where 10,000 users and 200 exhibitors are the norm. Solid Edge University had a few less of each: a little over 400 attendees and may be a dozen exhibitors. A hundred of the attendees were Siemens employees (Siemens owns Solid Edge) and another 50 or so may have been from third-party vendors and 40 or so from the media.

It's not as if Solid Edge didn't try. Many Solid Edge employees were tasked with cajoling users from their workstations and into Atlanta, but in the end, the city proved to be not near enough to so many users, says one employee. Last year's venue in Cincinnati, though a smaller city, attracted a few more, quite possibly due to its proximity to manufacturing.

Still, Solid Edge University was a million-dollar event that can scale up to a bigger audience (wherever the next one might be). This year, there was the big stage, inspirational speakers, interesting classes, a special event (you can't go wrong with a brewery tour) -- and plenty of staff to attend to every need of the media.

Did We Miss Something?

According to Siemens, the user base exists for larger Solid Edge Universities. We heard there are over 500,000 Solid Edge licenses sold, a number that seemed to immediately send the analysts into a huddle. Did we miss something here? The last we heard, numbers of seats of Solid Edge were low enough that we could ignore them. But half-a-million suddenly puts Siemens PLM in the same ball park as market leader Solidworks.

This year there were also more press, analysts, and bloggerd. There was even a blogger event the night before (though both Ralph Grabowski and I arrived too late to attend).

Though relatively small compared to more established CAD user events, the fact that Solid Edge University even exists is testament to the will of GM and Senior VP, Karsten Newbury. Now in his sixth year in charge of Solid Edge, Karsten has been able to create a separate community for his users, balancing the tight control exerted by parent company Siemens AG with a need to establish a separate identity for a populist CAD product.

For example, changing a font on a product page on the website can be like "moving heaven and earth," says one Solid Edge employee. Yet, Karsten has been successful in many ways. For example, Solid Edge presenters on stage wore jeans -- in sharp contrast to black suits commonly found at Siemens events.

[This article was reprinted with permission of CAD Insider.]

Posted at 11:35 AM in Roopinder Tara | Permalink