« How driverless cars might reduce traffic jams, but probably won't | Main | The paradox of UAC »

Fuel3D brings point-n-shoot to 3D scanning, but at a DSLR price

Getting 3D models from photographs seems magical when you see the result, but there are barriers to existing systems. Consider Autodesk's 123D Catch: it involves someone taking 30 to 40 photographs. That's a lot of photos, a lot of data, and time. Though Autodesk's system doesn't require you to be precise, there is some technique involved. You must take a series of photos in two different orbits around the object. What happens if the subject moves? Then racks of cameras shooting simultaneously can alleviate the issue, but that means you now have to have 30-40 cameras on mounts.

Fuel3D was at Maker Faire offering a system that seems to do away with the above problems:

Technically, not a single exposure but a series of shots are taken over a half-second (the same way HDR [high dynamic range] photos are made). Movement of the device during this time is removed from the result by using a optical "tracker," which the people at the booth were holding to their chins. A tripod mount would do away with the need for a tracker --though there is still a question as to movement by the subject.

People were lining up at the booth to get their faces scanned. Catering to individual vanity proves the way to draw a crowd. The ragged, incomplete scans were, however, far from flattering but the novelty seemed to make up for it.

Fuel3D was developed for biomedical applications, such as fittings of objects to the face (gas masks?) or prosthetics. Live subjects are a specialty. The Fuel3D system claims a 1 mm accuracy typically but can be as good as 0.250 mm with the right conditions. I expect the premium importance placed on accuracy should lend itself to 3D scans for reverse engineering or other modeling of existing 3D objects.

The device, which looks more like my bathroom scale than a camera, uses twin cameras mounted some distance apart. It is the difference in position that it uses to calculate the position of points of the object in 3D space. The camera records color properties surface point positions, so it is subject to reflectance. Irregular subjects and surfaces (faces, skin, body parts), artwork, food -- all these work well. 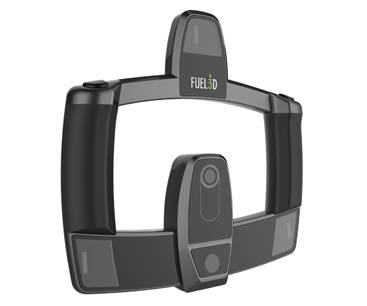 Shiny, smooth, sharp edges -- not so good. Perhaps this is a deficiency that can be overcome in the software? I hope so. The Fuel3D device offers considerable advantage over multi-shot or multi-camera photogrammetry systems.

When and How Much?

The Fuel3D is expected to ship October 2014. You can pre-order one for $1450 with mesh software included.