Each day, COFES begins with a keynote address, of course, like any other conference.

But then things change. Most of the first full day consists of "technology suites." Eight hotel room suites are hosted by a vendor or analyst. But they are not allowed to talk about their products; instead, they are to engage visitors to the suite in a conversation about an industry issue.

Engineering Software Can't Afford to be Aloof from Politics

For instance, one I attended was on politics and engineering software, hosted by Steve Wolfe, the man who launched the very first newsletter for the CAD industry, many decades ago. He began with the problem of software patents; he feels that there is so much competition that programmer will come up with new functions -- even if there were no patents to protect the ideas. He mentioned the Auto-Dimension troll who is making life miserable for all major CAD vendors.

The conversation switch internationally, however, due to the presence of a software developer from Russia. It is common for North American CAD vendors to outsource programming to workers in Russia; might the current Ukraine spat escalate to the point that such offshoring work become illegal in the USA -- as it currently is with Iran?

From my experienece working with firms in China and Russia, I have come to understand that the problem we have with these countries is solely in the realm of the politicians -- which we should ignore, and so deal with our counterparts as professionals and as friends. 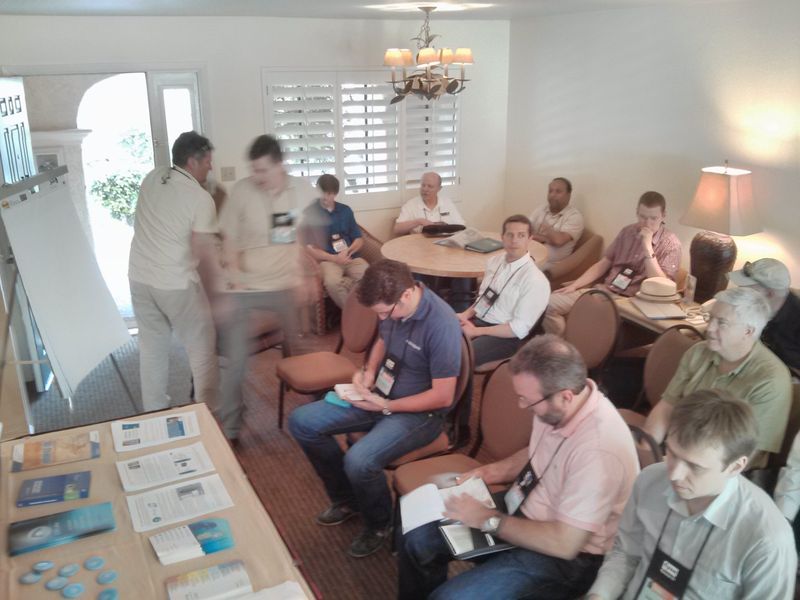 Another session I helped host, as the official Russian host was unsure of his English. C3D Labs is a branch of ASCON Group of St Petersburg. ASCON produces the biggest selling Russian CAD system KOMPAS-3D. It uses a home-grown kernel called C3D that's now 15 years mature; as of last year, it is being marketed for anyone to use by C3D Labs.

The topic of the session was not the C3D kernel but what a modern kernel should look like. As host Oleg Zykov reminded us, the dominant kernels ACIS and Parasolid are still written for desktop computers; today, however, we have young developers fooling around with iPhones and Android tablets, thinking of new ways to manipulate and visualize data. (I've see one such program that for iPads that I cannot yet talk about: it is impressive and is programmed by one guy.)

The conversation by the group naturally moved to issues presented by the cloud, and then moved further into the great data translation problem. Mr Zykov asked if a single file format would solve the translation problem, and the answer from the audience was an emphatic No! Partly because for technical reasons (ACIS and Parasolid used 2D curves, C3D and other modern kernels use 3D curves) and for political reasons: CAD vendors want to lock customers in by allowing only imports of proprietary formats, not exports.

There was some side discussion on the problems created in V6 by Dassault going to a single database, and no longer saves drawings in files. After some bad mouthing from the crowd, an employee from Dassault wanted to make clear that the decision was made to help customers (everything they use for a project is now in a single database, rather than scattered about), even if it did have negative side effects.

A significant point that limits the speed of the cloud: data is read serially from files, greatly slowly the potential speed of parallel operations.

Posted at 09:21 AM in Travelogues | Permalink