The best 3D scan devices are made with PrimeSense hardware. PrimeSense was bought by Apple in a $345-million deal in November, 2013. One person not happy with this deal is Amir Rubin, ceo of Paracosm [the word refers to detailed but imaginary worlds you create inside you mind], who may be speaking on behalf of the community of startup firms intent on using 3D scanning for engineering and architectural applications.

Amir's company used PrimeSense hardware to create 3D models of building interiors from scan data. "Here was the best cheap scanner you could get, and Apple has bought it, and made it inaccessible for everyone else. They even shut down the Web site."

The primsesense.com Web site as it appears today

"Primesense nailed the tradeoff of cost vesus performance," he says "There aren't any viable, sub-$30,000 alternatives for acquiring 3D structural data readily available on the market. You can't get that kind of scan quality from point and shoot cameras. You have to have a laser, an infrared laser. Photogrammetry [ie, 3D models from photos] gives no scale. That building is going to be the same size as this candle holder," he says, pointing to the candle holder on our table during closing night's open bar at COFES.

The Primesense 3D scanner, while it was still available

"Every one is upset." Amir's company has managed, by hook and by crook, to stockpile a couple hundred PrimeSense devices. He seems to think the patented technology of PrimeSense prevents another company from making anything as good, as accurate, and as cheap.

PrimeSense makes the Capri, which is a 3D-imaging signal processor on a chip. It is used in the $399 Sense handheld scanner sold by 3D Systems. How the Apple acquisition of PrimeSense affects the future of the Sense product is not known at this point.

(Similar hardware was developed by Canesta, which was bought by Microsoft in 2010 for use in their Kinect gaming system. The acquisition cost was not disclosed, but Canesta had raised $60M from investors before Microsoft bought it. Microsoft is no stranger to billion dollar deals; it paid $1.4B for Visio in 2000.)

The Capri chip was discovered during a teardown of Google's much anticipated "Project Tango" smartphone, where it would power its 3D imaging capability. 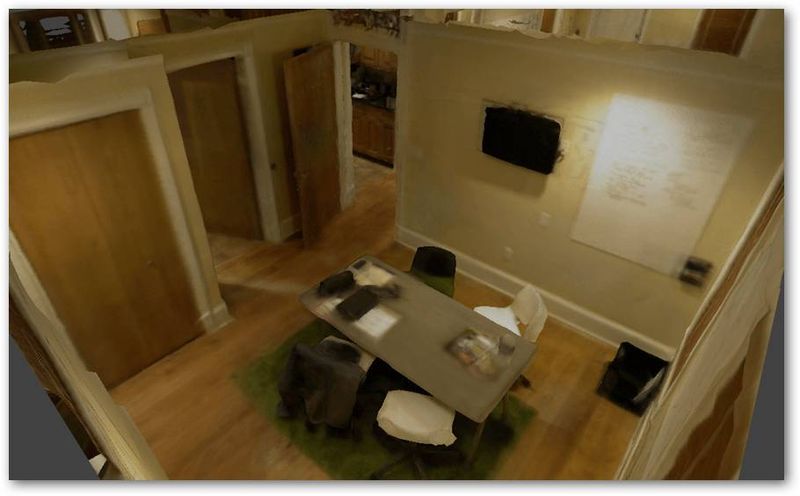 A scan processed by Paracosm's software

The Stakes Are Too High for CAD Vendors

This is a pity for Autodesk, who is trying to get into 3D scanning in a big way with its ReCap software. With promising technology being gobbled up by tech giants at hyperinflated prices, what are CAD companies to do? Even the biggest CAD companies barely make $3 billion a year. One of the biggest deals in CAD -- Dassault buying Solidworks in 1997 for $316 million -- was smaller than Apple's PrimeSense acquisition. It's possible that Autodesk was in the running for PrimeSense, but it's likely that Autodesk would have folded early as the stakes climbed.

It sucks to watch sky high deals being made for gamers and for watching television. (Apple won't say, but rumors are that it bought PrimeSense for a remote control of its media box.) This leaves serious technology applications -- from Paracosm to ReCap -- out in the cold.

While the tech titans can afford to pay billions for toys they must have tomorrow, it is the CAD companies that have the tools and the time to put something together. Most technical professionals don't know they need 3D scanning right now. We have six months, a year, maybe more before demand builds up.

Why not throw a skunkworks design team together? A couple of engineers ought to do it. Tell them to put something together. Or how about sponsoring a maker contest? Sensors, IR [infrared] transmitters, even microprocessors are stuff of Radio Shack. All that's need is an infrared beam emitted and detected, with the direction and the difference in time used to give the position. The hardware is cheap: the Leap Motion device does that for $80. Then the rest of the magic is done in the software.

How hard can this be? And who better than CAD companies to do software -- and have design tools? Maybe this is a chance for CAD companies to actually make something, practice what they have been preaching. It beats crying in your beer about those Big Bad Tech Giants.

Posted at 01:49 AM in Roopinder Tara | Permalink

No, it's mainly Apple that screws people over. Apple could have continued to make it available to OEMs (like QNX is still available from Blackberry), but they don't give a d**n about anybody else.

I think they do give a d**m about somebody: Android. I suspect taking the technology off the market is all about making life more difficult for Google and its non-Apple customers.

My point is they don't care about the existing customers of the companies they buy. They screwed over a lot of customers when they bought the PowerPC chip company and then dropped all the products.

As far as gestures and such go, there are lots of solutions out there, many of which are probably cheaper (such as Aquifi), so I don't think this impacts Android at all.

Am I missing something? Paracosm sold out right?

As did PrimeSense, , but Microsoft still makes the technology available through Kinect.

I hope Apple's not becoming MS in business practices, no innovation, just acquisition, gorilla body slams of competitor, replicate competitor innovations. Works for a while but...