« We're Online! (Who Cares About the Rest of the World?) | Main | foto of the sunday: christmas concert »

My thoughts on SpaceClaim 2014

The SpaceClaim software is eight years old, and this is its 11th release. While direct modeling has been around longer than history-based parametric modeling, it was not until SpaceClaim was released that the Big CAD Vendors piled onto the direct modeling bandwagon. I suspect, however, it was a matter of fortuitous timing: with the MCAD market maturing, vendors needed a spark to reignite their marketing, and SpaceClaim gave them an idea.

I mean, think about it. PTC had bought CoCreate but let it languish largely; we could say SpaceClaim brought CoCreate into the Creo fold. Autodesk openly launched its Fusion project; Siemens PLM developed the Synchronous Technology thing. SolidWorks tried with a skunkworks project that failed, curious given the historical link between SpaceClaim and SolidWorks. Well, maybe not so curious, given the new directives from head office in Velizy-Villacoublay.

Justin Hendrickson, director of product management, showed me SpaceClaim 2014 this morning via GoToMeeting. It was first positioned as an adjacent seat product, so as not to spook the Big Guys. But, Mr Hendrickson said, they are starting to expand seats in existing accounts. "It's no longer just getting a couple of seats into the door." Increasingly, he says, it being used for manufacturing jobs: so no more sly adjacent-seat marketing.

"It used to be the trend to move to using one tool for all tasks," he said, "But now the trend is reversing: use the tool that's best for the job." He reeled off a set of statistics:

These stats were pulled out of 1.4 million sessions -- kind of creepy, if you ask me. "It's like the PhotoShop of 3D," he said. As for future growth, he sees SpaceClaim prepping models for 3D printing, STL editing and scanning parts to solids.

At his company, an internal UX design rule is to never display a dialog box, if at all possible. Instead, guess a default answer but make alternatives visible, if the default is not what the user wants.

There is a lot of new stuff in this release, and I can't cover it all, so here are some of the things that caught my attention.

With the move to model-based design, PMI is important, and so 2014 has Smart PMI. For example, cylindrical tolerance cannot be placed on non-cylindrical surfaces.

Link driving dimensions to Excel, so that making changes to values in Excel changes the model; getting pretty close to family of parts. See Figure 1. 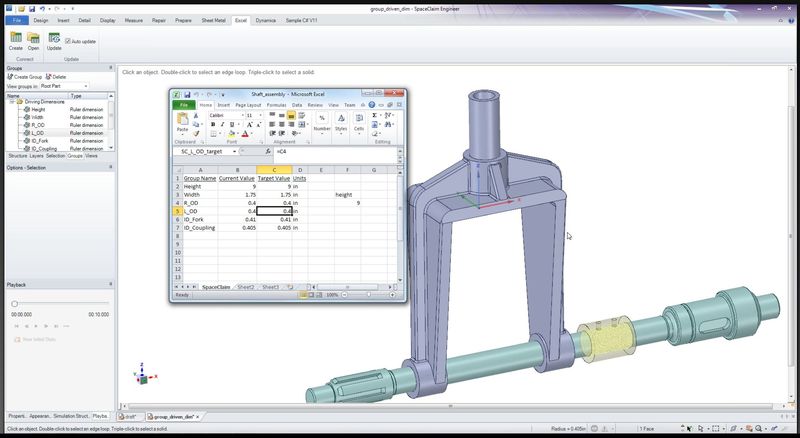 Figure 1: Data in a spreadsheet driving the sizes of parts in SpaceClaim 2014


Dynamics for SpaceClaim module: high speed collision physics (from Algoryx physics for gaming); not tied to a graphics board, but does use GPUs for processing. Works with collisions between objects, not constraints between objects. For example, gears move against each other with no constraints, just through face contacts, and gravity operates in the negative z direction: "This is not like in SolidWorks," said Mr Hendrickson. (The module is costs extra.)

New CAM plugins for GibbsCAM and ESPRIT; included in the price.

Open from Outlook: drag any supported file from email into SpaceCliam, and SpaceClaim transparently downloads the file, loads it into memory, and then asks if you want to save it.

Publish models to a browser-based viewer: models are uploaded to SpaceClaim's servers, which provided unlimited storage for free. Any WebGL-compatible browser can view the model. Currently, the browser can cut cross sections, and show  models in perspective and standard views. Access is fast, because there is no login, and no need for an account. The URL is unique, which is the security for now. Future release will add security, such as hosting on your own server, and might add more fucntions, like markups and measurements.

Enter mass, and SpaceClaim determines the volume. Useful  for designing shampoo bottles (my idea): what shape can hold 12 ounces? This function can be driven from ANSYS: how much can mass be reduced and still meet strength criteria?

While the company used to sell a cheaper version of SpaceClaim, they cancelled that one to provide just one edition. Well, not quite. There are many OEM versions, such as Spark that does reverse engineering with technology from Geomagic.

I asked about DesignSpark, the free version from RS Components/Allied Electronics. Well, Mr Hendrickson, it is a trimmed down version. In particular, it cannot import 3D file formats, and exports only to 3D rendering formats. SpaceClaim the company decided to allow it, because the #1 SpaceClaim function is modifying imported geometry -- which DesignSpark cannot do.

The new release is shipping today. Download the free demo version from http://www.spaceclaim.com/en/trial.aspx, after filling out a form.

"Link driving dimensions to Excel, so that making changes to values in Excel changes the model; getting pretty close to family of parts."

What's shown in the video, that SpaceClaim made for SpaceClaim 2014, is so limited that it tells me next to nothing. SpaceClaim needs to do a video just for this new feature. It looks to me like it would take way too much time using Excel and SpaceClaim compared to using something like the SolidWorks built in Equation Editor:

I could be wrong. Hard to really know with the insanely limited video coverage SpaceClaim provided in regards to this feature.

In addition, SpaceClaim 2014 still lacks many of the needed low level surfacing tools I often need to get the job done efficiently or just done period. I love many parts about SpaceClaim and I do see progress but development on SpaceClaim is much, much too slow in this area.