« Here's some of what's new in Vectorworks 2014 | Main | In upFront.eZine this week: we reveal how Tech Soft 3D is making 3D models accessible to all devices »

Another time I might write more about what I liked and disliked about the EX2F.

I liked the idea of having the brightest lens available to a point and shoot, because I never use a flash in my photography. Flash makes ugly photographs. Bright lenses are available to digital SLRs; the largest I've read of is f1.1; but even an f1.4 lens is expensive because of the large amount of precisely-polished glass needed.

But even after several firmware upgrades, the rare $500 EX2F became frustrating to me. The big lens meant it was limited to 3x optical zoom, and I love a big zoom! Last month I searched for a relatively compact camera with a long zoom, reasonable price, and preferably Canon brand name.

I found it in the $250 SX500IS, a point-and-shoot with a 30x optical zoom. I've owned several Canon digital cameras since 2001, and so I opened this one up with some preconceived notions of what to expect. I found there were things I hated and others that I loved about it. 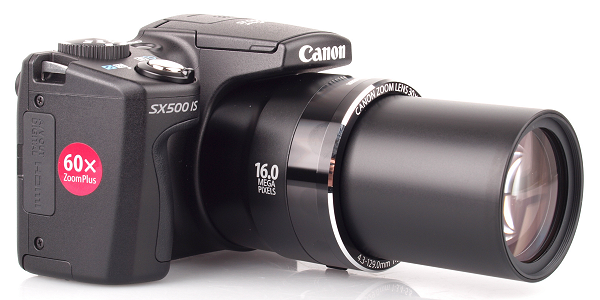 No USB charging. During day-long conferences when I am taking many pictures, I keep the charge up on my camera and cell phone by plugging them into the USB ports of my notebook computer. Canon doesn't do this; it provides a proprietary battery and an external battery charger. To recharge the battery during a busy shooting day, well, I can't. I had to buy and take along a second proprietary battery ($30) and the external charger -- instead of using a simple USB cable.

Other irritants. The box contained no printed manual; it was on the CD. But at the time I bought the camera, I had no computer with a CD drive. The CD contains Canon's software for stitching photos into panoramics, but (a) this software hasn't been updated since the first time I encountered it in 2001, and (b) the camera has no function for taking panoramics.

Zoom out preview. When I take a photo at 30x zoom (or even at 30x optical * 2 digital = 60x), it can be hard to find my point of interest, because the field of view is t-i-n-y. Canon provides a button on the lens barrel that temporarily changes the zoom back to wide angle so that I can see the full view; the current zoom-in area is shown as a small rectangle, allowing me to position the camera correctly.

F-stop adjust. I ranted earlier about the importance of a bright lens, and this camera has a mediocre f3.0 maximum brightness. But it does have a button to bias the f-stop, a function I have not seen on any other point-and-shoot -- not that I've seen them all. Press the +/- button and then use the dial to make the scene brighter (for backlit images) or darker (for overbright scenes).

Folders by date. All the recent Canon cameras I've owned segregate photos in folders by the shooting date. This is brilliant, and I wish all cameras did this. When on a vacation and taking lots of photos each day, each day's photos are neatly separated. Usually, at the end of the day, I copy the folder onto my computer as backup.

Posted at 01:28 AM in Digital Photography | Permalink