« In upFront.eZine this week: how Haswel ignores the needs of desktop CAD users | Main | With this beta release, Bricsys is back in the architectural biz (updated) »

My new toy: the first phone built for Firefox OS

There's the Big 3 in mobile operating systems, of course, Android, iOS, and Blackberry 10. And then there are a lot of wanna-be's that you may never see -- or even hear about. I missed out on getting a WebOS phone or tablet, and so I was determined to get the latest wanna-be, one of the rare phones that run Firefox OS natively.

There are only two smartphones (might be more, it's not clear to me, although Foxcon says they'll be making the first tablet) that run the beta version of Firefox OS, both from GeeksPhone of Spain. (You could install FireFox OS on certain Android phones, but after paying $280 to recover my Android tablet from a OS replacement I botched up, I'm not doing that anymore!) Buying one is tough, however, because the Web site usually is out of stock. After clicking compulsively for over a month, I was lucky when a few actually were available, and I ordered the Peak. (Later in the day, the site was again sold out.) 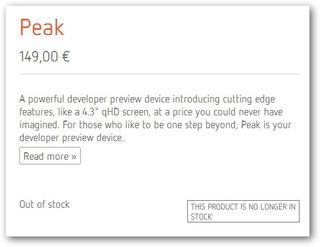 I mean, how cool is it to walk around with a phone labeled, "Developer Preview"!

The site sells two models, a low-end e91.00 Keon and the e149.00 middle-spec Peak. The prices may seem cheap for unlocked phones sold at full price, but by the time I added shipping from Spain, customs duty into Canada, and the Euro->dollar exchange rate, the Peak peaked at $275. As the phone was shipped to Canada, I didn't have to pay the 21% Spanish sales tax (saved me $44).

The phone arrived quickly: I ordered it on a Tuesday evening, and the UPS driver handed it to me on the following Monday, along with the import bill. (The site has no accessories for the phone.)

Here they are. In the orange is the Keon, in the white the Peak; there is no choice in colors. (The photo is a bit misleading, as the Keon is smaller than the Peak.) 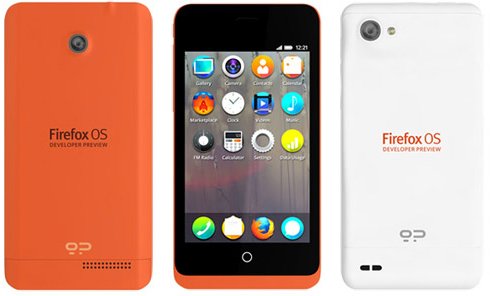 The phone is cheap and feels cheaply made. The bezel is wide, the screen is probably plastic, the plastic back comes off but I pretty much have to bend it to get it back into place, and vibrate mode feels like there is a small unbalanced motor wobbling around inside the housing. It was designed in Spain and so looks elegant, but was made in China and feels like the discount Android tablets I buy from there.

There is just one button, which returns the phone to the home screen. Double-pressing the button brings up the task switcher. As is lacking on the iPhone, I wish the Peak had a universal Back button, as on Android.

Being an unlocked phone, I can stick in any (full size) SIM card and so use it just anywhere in the world on GSM and UMTS bands, plus Edge, 3G, and WiFi for data. As well, it has both kinds of tethering, WiFi and USB.

The Peak phone has the following specs and features:

It came with a USB/microUSB cable, headphones with mic, and a USB charger. The charger has the European plug instead of North American unfortunately, but it will be useful when I travel to Europe this fall.

This Phone Is Not For End Users

This phone is not for end users, I repeat. It is meant to test the beta of FireFox OS, and so receives daily updates. This cell phone operating system is not yet shipping, and so it has rough edges in some areas.

For example, I could not import contacts from my Google account (this will be added in a later update) but in the meantime someone wrote a separate contacts importer app, which ran at a speed of about 100 contacts per minute. Although the phone runs the Firefox Web browser ('natch), I was disappointed that it does not accept any of the thousands extensions from Mozilla -- yet.

OTOH, there were already some nice touches. The email software is pretty good, and instantly connected with GMail after I typed in my username and password. Calendar also works with Google Calendar. The phone's camera software has editing and filters, and the mapping (from Nolkia) is as good as Google Maps. There are already lots of Firefox OS and HTML apps to search through and download.

How Firefox OS is Different From Android

If you use an Android phone, then you can immediately use a FireFox OS phone. There are many similarities, such as the drag-down task bar.

This is not an Android phone. And so when you turn on the phone, there is no prompt from Google, and so none of your GMail, Calendar,  Contacts, or Android apps are going to magically appear in short order, as they do on Android phones.

The primary UI difference is that there are no dedicated back or menu buttons. These appear in the apps; a soft back button usually appears in the upper left corner (inconvenient to reach with the thumb) and the OK or Next button usually in the upper right (much better than at the bottom of the screen, which often is covered by the keyboard on Androids).

The other primary difference lies in the apps. All Firefox OS apps are written in HTML5 only; Mozilla added some extensions so that the HTML5 can access the hardware and run faster types of code. You need to be aware that there are two kinds of apps:

(2) native HTML5 apps, which are like regular Android apps that reside on the phone; these operate whether the phone is connected to the Internet or not.

Not an Android Replacement

In summary, the Peak is not going to replace my Android-running Nexus. But I do look forward to taking part in watching Firefox OS mature.