« In upFront.eZine this week: we ask, does NSA's Prism capture cloud-based CAD data? | Main | Do CAD vendors contribute to PRISM? »

Canon mixes up its reality

Canon is a company we know best for fine cameras (and less so for the purchase of OCE and their large-format printers). It seems, however, less intent on seeing things as they really are, but rather how you wish they were. With its MREAL virtual reality system, they can show NX models inside an existing, real world environment.

Here at the Siemens PLM Connection 2013 exhibit hall, I enter this virtual reality world with my hand in front of me. The cameras detects my position, and the display shows the model with with my hand on it; I virtually handle the part inside the real world.

How is this not what we have seen before? and referred to as "VR" or "AR" (virtual or augmented reality)? I had just come from the zSpace booth down the isle, where I wore only a clip-on over my glasses to see virtual models. The Canon head gear seems bulky and excessive. I am told it's still better than other VR head-mounted displays, which cut off the rest of the world; I think of deep diving helmets. I can see enough with MREAL to not trip over the furniture. And it has to be far less of an investment than a full blown CAVE (cave automatic virtual environment). 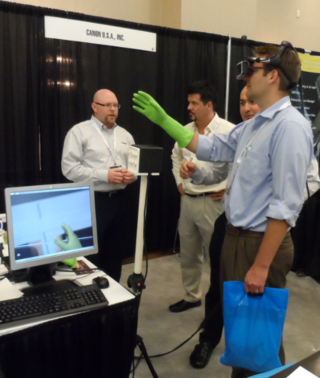 Canon's MREAL lets users interact with their NX model at Siemens Connect in Dallas. Rubber glove help isolate hand from surroundings but will not be needed.

MREAL has been available for nine moths for NX. A CATIA version is due soon. Shown here for manufacturing use with NX, the MREAL could also be used in architecture, museums, and safety training. Canon mentions oil rigs. (Now that they mention it, it would certainly be nice to to run through an evacuation tunnel in a virtual oil rig rather than a real oil rig with flames licking my butt. But I'm not sure how I can use MREAL on the run, as wires seem to tether the system to a computer, but let us continue.)

In what appears to be a attempt to establish itself in virtual reality, Canon will "work with you" to rather than quote a price for the system. "We're more interested in getting some good case studies, says Peter Johnson of Canon. The MREAL system was first used internally by Canon themselves to design their own products, but now Canon must have realized that they could actually sell it to others.

For more information, see the Canon site at http://usa.canon.com/cusa/office/standard_display/Mixed_Reality_Overview

Posted at 08:30 AM in Roopinder Tara | Permalink