« BricsCAD V13.2 released today with 64-bit support for Windows | Main | In upFront.eZine this week: CAD war in Russia, and a cross-cultural wedding »

What Kind of a Threat Does Autodesk Faces from China? (part 2)

In the wake of the GstarCAD8 launch last month in Beijing, to which three of us western journalists were invited, I reflect on the chances of success of a Chinese CAD company in the US and world market. 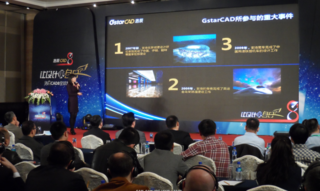 GstarCAD8 was launched with sufficient fanfare. There were pretty girls, bright lights, a big stage. As more CAD companies are choosing to soft-launch major releases from behind WebEx screens, this did make us sit up and take notice. One might read a lot into their willingness to fly three Western industry journalists half way across the world to see the unveiling.

We listened through translator headphones as company executives extolled the product’s technical prowess, as well as to their deliberate, longterm campaign that over the years sought to establish Gstarsoft first as a regional CAD product, then as an international tool of choice.

Can they do it? We are only too well aware to what China has done to us with manufacturing. Can they do it with software?

Guess what: Your software is probably already made in China – and India. I cannot think of a major CAD vendor that does not have a development team in China or India [or Russia] – or use Chinese or Indian labor on its home soil. A CAE vendor once told me that almost all of its developers were in two distinct groups, one from China, one from India. That was 20 years ago. The world has only got flatter since.

Still, to hear one Chinese company extolling their CAD product is not enough to convince me that it will rule the CAD world. GstarCAD has only about 400 employees [Autodek has 7,500]. It is funded privately, and not by the vast concerted might of the country itself. Autodesk and other CAD companies can exhale.

There are signs, however, of a national directive for China to establish itself as a major player among software vendors. At the GstarCAD8 launch, president of GstarCAD Ky Xiang told us, "China will be the software center of the world."

Clearly, China is no longer content to be bridesmaid, earning pennies for factory, sweatshop, and cubicle labor while it sees US stockholders pocket the big bucks. This has to hurt. God help our current CAD market leaders should China ever get its act together. Even current heavyweight Autodesk would be knocked clear out of the ring if that happens.

Posted at 09:02 AM in Roopinder Tara | Permalink

Lets see how they handle companies that pirate their software from their own country.
Maybe they will become advocates against such actions and get the Chinese government to crack down.