« With NetSuite linkup, Autodesk confirms that it's no longer just a CAD company | Main | In upFront.eZine this week: Graphisoft gives ArchiCAD 17 the details »

The line to get into Maker Faire is a mile long. Spread out over the San Mateo Fairgrounds, just south of San Francisco, this show expects 120,000 people over the next two days. Some of the halls will be so packed by later this afternoon that I will not be able to get from one end to the other.

The last big show before Maker Faire I went to was Comdex. The biggest CAD show I go to is Autodesk University, but AU pales by comparison as it cannot summon even 10,000 attendees. I’m certainly not the only CAD insider trying to figure this out. Exhibiting at this show are Autodesk, Trimble (SketchUp), NVIDIA… and a host of 3D printing vendors.

Could this maker movement be the next phenomenon? And is there money to be made selling to all these makers? 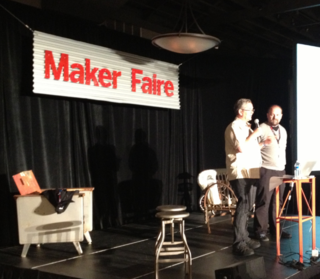 Dale Dougherty, founder of Make: magazine and the wildly successful Maker Faire, introduces a speaker during the press event

As I survey the sprawl of exhibits, how to tap into the maker market may not be very clear. As varied as it is big, Maker Faire is at first glance a loose collection of disparate movements, trends, arts, and crafts. Among mechanical fire breathing contraptions (the Burning Man crowd is well represented), there is also produce from inner city gardens, robot kits that promise on-time meds, to Chinese grandmas, aerial farm drones, and a hundred products from science fairs.

From these minds of whimsical artists, two things seem clear to me: 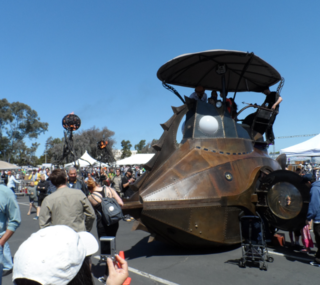 Maker displays are often wildly creative, such as this huge draw at Maker Faire Bay Area

Making something invariably involves materials and resources. With the numbers Maker Faire can produce, it was only a matter of time before corporate America came a-knocking. Not just CAD companies, but insurance companies; Intel making music; Radio Shack just signed a big partnership; and more.

Young makers may be spending their allowances or their parent’s money and the artists their welfare checks, but that’s still more than the average bear. I hear the typical maker manages to spend $1800 a year. Quick SWAG [scientific wild-ass guess]: Maker Faire claims a total audience of almost a million. Let’s suppose that 9 of 10 makers are too busy tinkering, soldering, sewing, or cooking to even show (that’s very conservative), and so we can estimate the total spend of the makers to be about $10 billion!

Some of this has to be on design software. Of course capturing the young hearts could only produce greater dividend over time. Successful tinkerers and inventors mature over time, increasing their buying power and influence. Get them while they are young, right?

Posted at 01:02 AM in Roopinder Tara | Permalink