« In upFront.eZine this week: Vendors react strongly | Main | Using WiFi with a digital camera, part i »

What happens when we try Nomad with no Vectorworks sub

Vectorworks last week released its Nomad app for Androids, and so I was curious to check it out. I read from the press release that it was only for people who pay into the subscription program run by Vectorworks.

I thought, well, let's see how far I can get without a sub. Going to the https://play.google.com/store/apps/details?id=net.vectorworks.nomad page, I found that the app is compatible with three of my Android devices: Google Nexus phone, ASUS Transformer tablet, and MOMO8 tablet. It was not compatible with older devices of mine: my first Android phone (Samsung Vibrant) and my first Android tablet (WonderMedia WM).

Google shows a chart of downloads for each app, along with an imprecise number of downloads. For Nomad, the chart today looked like this:

The chart shows a peak of interest shortly after the release on April 11. The "100 500" means the software has between 100 and 500 installations so far. (Apple doesn't provide this kind of useful information)

I downloaded the app to my ASUS Transformer tablet, started it up, and got blocked on the very first screen: 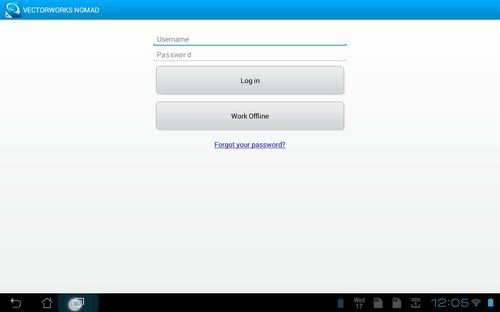 No userid/pw, no go. I was hopeful that the Work Offline button would let me take a peek at functions, but it was also a no-go zone:

This is too bad. Vectorworks could include a sample drawing so that prospective users (and subscribers) could try out the functions without a subscription and without accessing the Amazon cloud service.