Samsung's EX2F offers many WiFi modes, but none of them work on the camera while taking pictures. (There is one exception.) It won't transmit photos to my nearby laptop computer as I take photos at a seminar, for instance. I wish it would, and maybe a future update to the firmware will allow this. Or maybe the camera's computer architecture makes this function impossible. 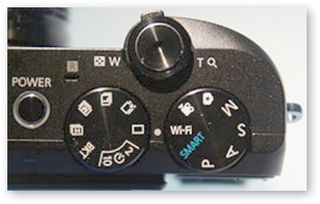 This EX2F camera cannot take photos when in WiFi mode

Here is a summary of the modes available when the camera's Selector dial is set to WiFi: 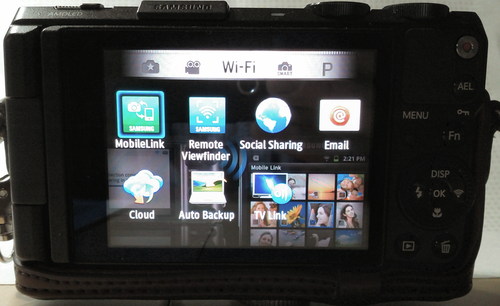 WiFi modes displayed by the screen;
I reach a mode by pressing the camera's control wheel.

RemoteViewfinder - allows an Android or iOS device running RemoteViewfinder app to control the camera via WiFi; low-resolution versions of photos taken by camera are saved on the phone/tablet

Email - camera sends selected photos to anyone by email through WiFi; it has simple built-in email software

Auto Backup - camera sends photos not yet copied to a computer running the Auto Backup software over WiFi; this function is also available when the camera is connected to the computer with a USB cable

TV Link - camera displays via WiFi up to 1,000 photographs on DLNA devices, such as smart tvs

In addition, I can assign one of these functions to the dedicated WiFi button as a shortcut.

Those are the options. I've used some of them, and so let me give  you an summary of my experiences of (a) connecting to the WiFi, (b) using MobileLink and (c) using Remote Viewfinder.

Connecting the Camera to WiFi

Before the camera can do any of these functions, it needs to connect to a WiFi network. If I have not yet connected it to a WiFi netowrk, it displays a screen automatically from which I can pick from the networks available around me. See figure below, at left.

If the network is secure, I need to enter the password, which on this camera is as painful as using a remote control to enter text in a smart tv: pushing the cursor keys and then selecting individual characters from the on-screen keyboard. It is at this point I start desiring a touch screen model!

Fortunately, the camera remembers passwords. The next time I need to use WiFi, the camera attempts to connect to the most-recently accessed network. I find it is a bit slower than an Android in connecting to WiFi, about 10-15 seconds.

Here is how useful/useless I found the first two of  the camera's WiFi modes:

The camera prompts me to select the photos I wish to send to the Android, or I can send previews of all photos and then select them on the tablet's touch screen. The files are saved in the MobileLink folder. A recent update to the app means that images are saved in full resolution, fortunately.

This system works alright, except that on tablets the software insists on running in portrait mode, which is annoying, because I always use tablets in landscape mode. 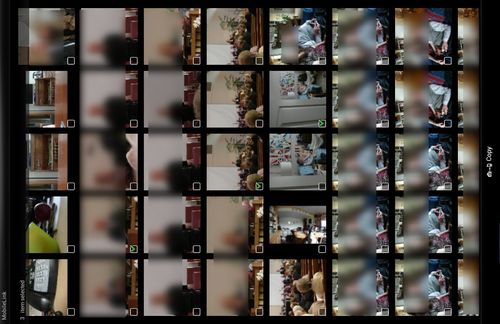 MobileLink software running on Android, as I view it
(I've blurred the faces of people)

This means, for example, that I cannot use Dropbox to upload photos via WiFi while the Android is connected to the camera. iOS devices suffer from the same WiFi limitation.

RemoteViewfinder. This app sets up a WiFi connection between camera and mobile device, just like MobileLink. While waiting for the two to connect, the following screen appears on the Android, and a similar one on the camera: 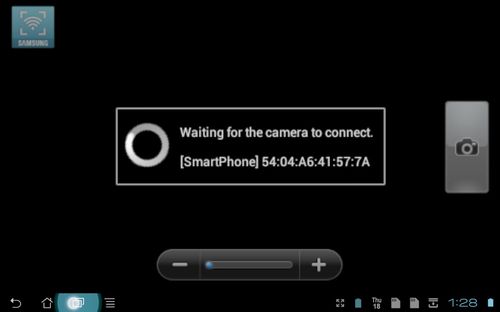 Waiting on the connection

After the connection is made, the app lets me control the following functions on the camera (see figure below). From top to bottom, left to right: 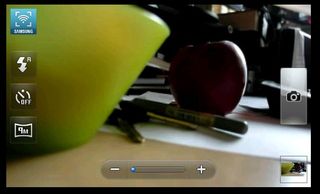 I could use this system to have pictures appear on my tablet as they are taken with the camera, but there is a serious flaw: the photos saved on the tablet are of low resolution, just 640x3o0! Even 800x375 would be acceptable for blog use. I would need to use MobileLink to move full resolution photos, and so I might as well use it instead of Remote Viewfinder.

Another flaw is that Samsung has not adapted the software to tablets, and so RemoteViewfinder appears in a small area in the center of my tablet. I can switch to Zoom mode which fills the screen, but then the app looks blurry. iPad users know what I am talking about.

Below is the interface of this app's View mode: 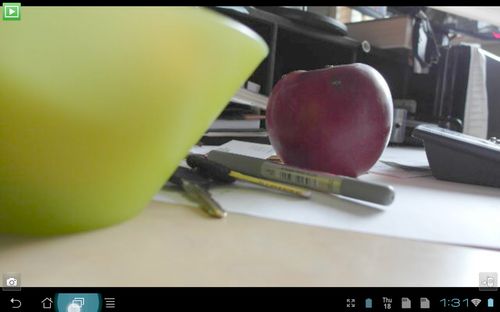 Viewing the remotely-shot photos on the Android

Posted at 01:52 AM in General Photography | Permalink