Tristram Carfrae is an engineer with an eye for aesthetics

Civil engineering firms work on the grandest scale. pushing back the sea, building dams, bridges, highways. Tristram Carfrae, structural engineer, director and Arup Fellow and keynote at Smart Geometry 2013, is used to overcoming the vast forces of nature. Carfrae and his firm, Arup, have built many big projects, including tall buildings, bridges, the Birds Nest Stadium and the Water Cube for the Beijing 2008 Olympic and plenty more. He is accustomed to moving heaven and earth. But when came up against a frog, he had to back down.

The diminutive green and golden bell frog (litoria aure) was endangered, and lived where Arup was digging for bridge.

The Kurilpa Bridge in Brisbane, Australia. (picture courtesy of Arup)


The distinguished and accomplished Carfrae admits to being "out of phase" here at Smartgeometry, where a decidely more youthful crowd forms clusters to build structures which can resemble modern art and playful experiments without immediate practical application. But Carfrae’s use of digital tools are lesson to all, especially in simulation. He is able to combine aesthetics with the practical… and deliver results.

One of his creations is in Brisbane, Australia, a cable-stayed bridge like no other, is as likely to invite criticism as it is praise. “I love that it has a polarizing effect,” says says Carfrae. What might appear as a random jumble of rods actually is. A spreadsheet produced random numbers which determined the length of each supporting rod. All in one shot. "We liked it, and left it alone.” 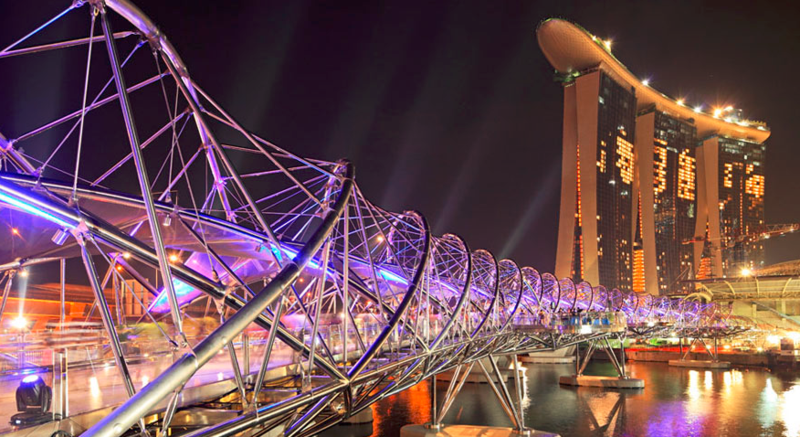 But Carfrae really let the computers hammer away during the digital simulation of a high rise office building that employed twisted columns. It took millions of iterations to get the columns to twist yet still be able to sustain wind and structural loads. The tower was grown one floor at a time, each time satisfying structural criteria, until all floors were created. After 20 towers were declared okay by the computer, the final design selection was based on aesthetics – by humans.

But it was another aquatic creature that almost stymied Carfrae once again. This time, fish. He was pitching a bridge in Singapore. The design was inspired by a Malaysian fish net. A local touch sure to be appreciated, right?

“Mr. Carefrae, what makes you think Singaporeans would like to get to get caught in your net?,” he was asked. He was also getting vibes that Singaporeans and Malays were not exactly friends. It seems that Singapore, a city state of 5 million, maybe be the most modern of Asian cities, was cautious of its more backward neighbors. in fact, the bridge was over a body of fresh water source, meant to reduce Singapore reliance on Malaysia.

Changing gears, Arup looked into a spiral construction, but a spiral is not structural, something easily observable with a Slinky, which droops easily when its ends are pulled apart. But combine that with an opposing Slinky and connect them? Simulation validated the design. But the maintenance cost would go way up, unless the bridge was built with stainless steel.

“What would that add to the project?," the customer wanted to know.

Arup got the job, now worth $45 million.

Posted at 01:04 AM in Roopinder Tara | Permalink