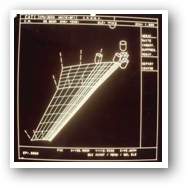 This history of Catia is written by its founder, Francis Bernard, and is hosted by David Levin at isicad. The software was launched by that name in 1977, but it was preceded by decade of development work, including a CAM interface in the late 1960s. Like other CAD software of the time, it was developed internally by a manufacturing company, in this case French aircraft maker Dassault Aviation.

The sales breakthrough came in 1981 when IBM agreed to distribute the software worldwide. The primary advantage: Catia did 3D design, while all competitors were limited to 2D; and, Catia was sold by IBM, a requirement for large corporations, like Boeing.

In September of that year, Dassault Systemes broke off from Dassault Aviation as an independent company. In 1984, Bernard Charles was hired for the R&D department, and then slowly worked his way up to president eleven years later. Francis Bernard retired in 2006.

Posted at 02:09 PM in Behind the Story | Permalink

The claim that, in 1981, "Catia did 3D design, while all competitors were limited to 2D" is incorrect. Deltacam Systems, the division of the Delta Group that evolved into Delcam, demonstrated the first 3D CADCAM system at the Machine Tool Exhibition held in Olympia, London, during June 1972.

Agree with the last post. In 1981 there were many 3D design CAD software systems. These included McDonnell Douglas with UNIGRAPHICS, GE/CALMA, CV/ CADDS, Etc... Most of the automotive companies had their own internal systems, which were had full 3d surface capabilities just like the CAD companies previously mentioned.