In upFront.eZine this week: when marketing the cloud hits reality of the cloud

In upFront.eZine issue #766 we have for your reading pleasure...

1. Meanwhile, Back in the Real World...
- What IT Managers Know

You can read all about the business of CAD at www.upfrontezine.com/2013/upf-766.htm

Ever since the release of V13 of BricsCAD late last year, I've been busy updating my trio of ebooks for the new version. As of yesterday, all three are available...

Compare with Book #3: BricsCAD V13 for AutoCAD Users discovers how BricsCAD is similar to and different from AutoCAD (236 page; free!) 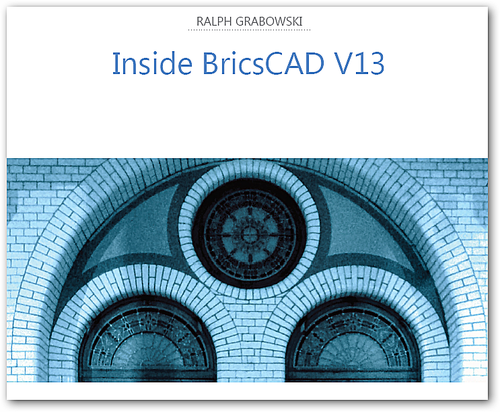 Learn from Inside BricsCAD V13

Here is more info at the books' Web pages, which handle all editions of the ebooks from BricsCAD V8 through V13. The Web pages provide links to purchasing this collection of ebooks through PayPal. 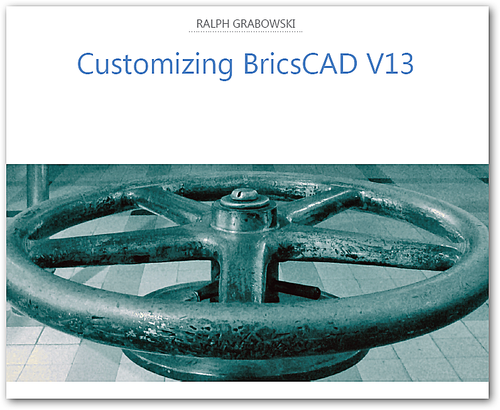 There is are bonuses to becoming a customer: (a) be the first to learn about new ebooks and (2) get 30% off future purchases. 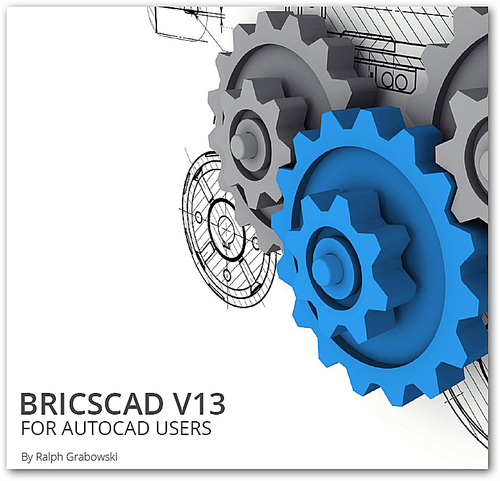 To view all of our ebooks, visit www.upfrontezine.com/ebooks

An update on think3 and think3

Italy's think3 was all over the news a year or two ago after UAE-headquartered Versata bought it -- partially.

We see over and over again that equity firms don't understand the subtleties of the CAD world (c.f. Battery Ventures buying up CAM), and so Versata discovered that it ended up with a partial purchase -- all of think3 outside of Italy.

And so we have two think3 software packages, one developed by Versata's contracted generic programmers and one by the original programming team in Italy. Indeed, the only way to tell the difference is by the TLD [top level domain] in the URL, because the logos are identical for both companies.

What I find striking is how the content of each company's Web site differs. It is is telling:

Which version of think3 would you support?

In upFront.eZine this week: Battery Ventures wants to own CAM

In upFront.eZine issue #765 we have for your reading pleasure...

1. Venture Capitalist Buys Up CAM
- The Future by Battery

You can read all about the business of CAD at www.upfrontezine.com/2013/upf-765.htm

Generating meshes in realtime from Webcams

One of the companies experimenting with low-cost 3D data input is Geomagic, but their findings are that low-cost devices like Kinect suffer from resolution that is too low for CAD use. Maybe the next generation of Kinect or other device that records feedback from sprays infrared dots. 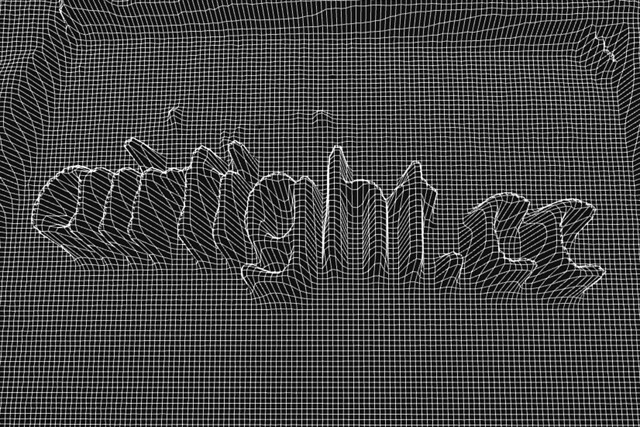 Airtight Interactive has another approach, and I'll let them describe it:

WebCamMesh is a HTML5 demo that projects webcam video onto a WebGL 3D Mesh.

Perlin noise is used to create the ripple effect by modifying the Z positions based on a 2D noise field.

CSS3 filters are used to add contrast and saturation effects.

Fire up Opera or Chrome, and then head on over to http://www.airtightinteractive.com/2012/08/webcammesh-demo/

Intel wishes it could do what Androids already do

I had to chuckle reading an interview on the Verge, titled Ultrabook, round two: can Intel control the future of the laptop? (The text of the URL, however, reads, "intel-on-all-day-battery-life-we-really-mean-it-this-time.") The interview is with Intel consumer PC head Kirk Skaugen, and just about every promise he makes for future PCs is already established on Android tablets and hybrids, like the ASUS TF101 with keyboard dock that I currently enjoy.

This is a case of Intel pedalling furiously from behind, and probably not catching up.

In upFront.eZine this week: analysts quiz PTC over Creo sales

In upFront.eZine issue #764 we have for your reading pleasure...

You can read all about the business of CAD at www.upfrontezine.com/2013/upf-764.htm

Why doesn't every CAD package have this new function in BricsCAD?

DUAL MONITORS: when using an external display, dockable dialogs like the Properties Bar, Command Line window and Toolpalettes could be off-screen after switching from 'Extend these displays' to 'Show desktop only on 1', or after the external display had been disconnected.

Now, when BricsCAD starts up, and a dockable dialog's position is off-screen, the dialog is moved to a default position. So 'lost' dialogs can be retrieved by restarting BricsCAD.

The future of computing

The dystopian future of computing:

It's been happening since January 22, when the Chinese government finally noticed Ping Fu's

book. Bend Not Break was released nearly a month earlier, and described the story of the ceo of Geomagic survivinging the horrors of the Cultural Revolution.

The angry commenters at the book's page on Amazon.com all have this in common: they have never before written a review on Ama

zon, they uniformly they give the book a single star, they give each other  hundreds of Yes ratings on "Was this review helpful to you?" (some get over a thousand), and their names and stilted writing style stem from the region you would expect to find a place like China. Oh, and no other autobiography is being attacked as assiduously on Amazon.

How does this reaction compare with more popular books? The first Harry Potter book in paperback has a mere 394 Yes-helpfuls for the most popular review, as of yesterday.

CAD editor Martyn Day wrote in defense of Ping Fu on Amazon, and for his trouble received 177 angry comments, the first one appearing after just 60 seconds. (See http://www.amazon.com/gp/cdp/member-reviews/A372CJ8A4DVMQP/ref=cm_pdp_rev_title_1?ie=UTF8&sort_by=MostRecentReview#R3DEQKCLLDZV75.)

The Guardian was guarded in its coverage last Tuesday of the controversy, as indicated

by the headline: "Chinese cast doubt over executive's rags to riches tale." The British newspaper just wasn't feeling brave enough to allow comments at all.

(Data point: around 200 watchers are "listening" to comments on the Daily Beast article, continuously. By contrast, other, more popular articles have 40 or 12o listeners.)

The primary complaints are that Ping Fu's story contains errors of history.

If It Were Me


If I were to write my autobiography, there would be errors and gaps, too. It gets hard to remember one's entire life story, even at my young age of 56 -- except for a few stand-out memories and even these might be corrupted by time.

One time as a child driving with my parents, I asked what those clear things were on telephone poles (glass insulators). I clearly remember my mom explaining that if I were lost in the forest, I could use them to light a fire. Obviously I misunderstood and misremember -- the benefit was, however, that after that I was never worried about getting lost in the vast Canadian woods!

I would call the attacks "defensive." The Chinese government's policy is Harmony, and so this book portraying the Cultural Revolution in a negative light would be seen as disharmonious, and in need of attack.

A friend teaches ESL (English as a second language) locally, and last year a middle-aged woman arrived to the class from China. One night she stayed up all night watching tv, for it was the first time in 21 years that she saw what really happened in Tienanmen Square. She was in tears over the deaths -- and the lies the government had told her people for these many years (that only a few student leaders were imprisoned, is the banal version distributed in China).

She called in her young son to watch so that he too would finally know the truth:

In contrast to those orchestrating the rage over an auto-biography, a contact reported yesterday that "Ping is back on the up and up. She's feeling strong now."

Anyone can create a drawing viewer; heck, we had them back in the late 1980s (tip of the hat to Vince Everts and Cyco). A new computing platform demands new ways of interaction, and finally in 2013 we are starting to see some breakthroughs. I've written already about IMSI/Design's TurboSite ($500) that takes advantage of most sensors in an iPad; here's another breakthrough:

Geometros's Furniture 3D Constructor ($3) lets you design rectilinear furnishings, like cupboards. What is fascinating to me is how they split the 2D and 3D paradigms. And it's not today's (well, 25-year-old) paradigm of construct a 3D model and then take off 2D drawings.

The Traditional Role for 2D and 3D

No, Furniture 3D Constructor works like a craftsman does: sketch out the design in 2D, and then construct it in 3D. The craftsman is initially interested only in the size and function; details like color and style of hardware come later. (See montage below.) 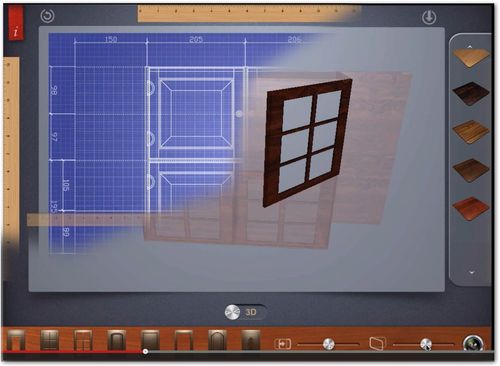 In Furniture 3D Constructor's 2D mode, you lay out the basic design. You use the icons along the bottom to select parts of the cupboard, such as shelves, feet, doors, and handles.

You create dimensions as grid lines by dragging the rulers, and then place the generic items along between and along the lines. You don't size the parts; the grids lines do. (See figure below.) 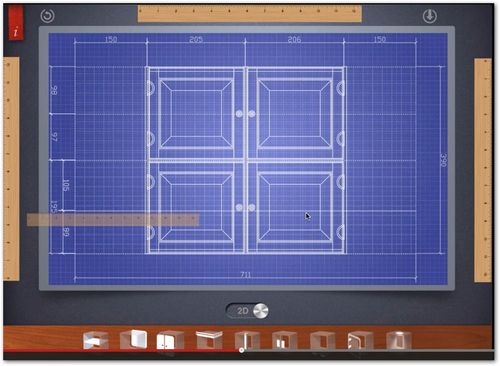 When you switch to 3D mode, you choose specifics, such as the type of wood, the look of the feet, and the style of the door handles. Swapping is as simple as choosing the existing item (a handle) and choosing a new one from the 3D icons along the bottom. 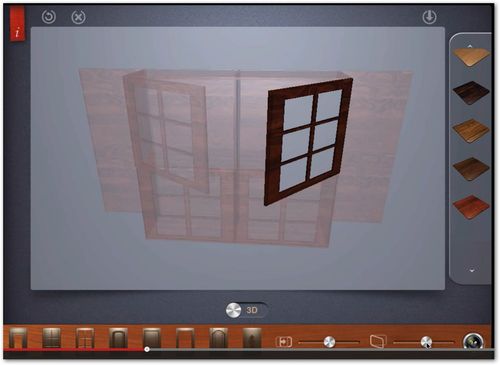 In addition, simple editing is performed in 3D, such as rounding the edges of shelves. (See figure below.) Slider knobs adjust the size of the selected object. 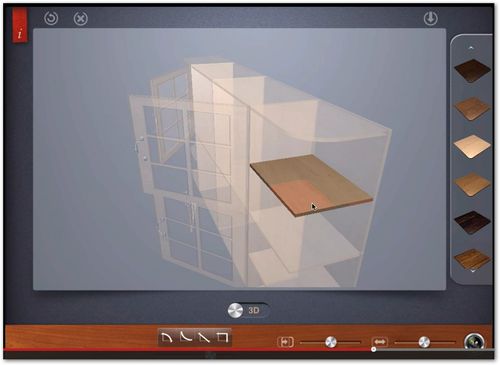 Furniture 3D Constructor is simple, maybe even simplistic. After all, it's just $3. But the folks at Geometros are showing us a new way to interact with new hardware.

When Apple last week quietly announced that its 128GB iPad is shipping tomorrow, it was so quiet that I didn't notice that Autodesk had twice received top billing in the accompanying press release -- until I read Jean-Louis Gassée's Monday Note on Sunday, "iPad Pro: The Missing Workflow."

The first "first" mention for Autodesk comes in the third paragraph:

(I boldfaced the file types Autodesk software works with.) Never mind that the sentence makes no sense (if you have large data, you have no choice). The other mention comes as Autodesk is given First Quoter status:

“Our AutoCAD WS app for iOS was designed to give customers seamless access to their designs anywhere, anytime,” said Amy Bunszel, vice president of AutoCAD products for Autodesk. “These files are often large and highly detailed so having the thin and light iPad with its Multitouch display, integrated camera and all-day battery life, is a real advantage for iPad users to view, edit and share their AutoCAD data.”

Curiously, the quote make no mention of the larger capacity of the updated iPad model. Autodesk wants you to pay them to store your proprietary data on their cloud storage service, and not have massive amounts of data laying around on easily-stolen portable devices. Perhaps this is why the Autodesk quote ignores the 2x capacity jump for iPad.

Of course, part of the problem is the faux-minimalist design of the iPad, which has no memory card slot. My ASUS TF101 tablet has two such slots, and so it can carry 16+64+64GB of storage -- all for about the price of a regular iPad.

Back to Mr Gassée, who normally is an Apple cheerleader. For this shiny new iPad, he does not understand why Apple positioned it as a device for professionals. He provides several examples of tasks he does effortlessly on his MacBook are nigh-impossible on any iPad, no matter how much storage space it has. As Exhibit #1, he gives the example of how difficult it would be to assemble his Monday Note newsletter on iPads.

Instead, he figures this new model is simply a way for Apple to increase the average selling price of iPads, which has fallen 18% over the last year.