« Dassault keeps beloved SolidWorks intact, so far | Main | Adding RAM to Acer's ZS600 all-in-one computer is tough; here's how to do it »

There is a lot of CAD software for Android and iOS tablets, but pretty much all are simple adaptations of desktop CAD metaphors to the finger-as-stylus interface. The adaptation consists of (a) fewer functions and (b) larger icons. That's pretty much it -- other than passing files between the CAD program and email or Dropbox-like services, and in some implementations the file-passing function is painful to find/use.

Starting at the Basement

The exception is a company known better for loud marketing than innovation, and so IMSI/Design has surprised me. When a year or so ago they first told me in confidence that they had big plans for mobile devices, I kept my enthusiasm in check. In my 27 years in this business, I have had many eagar company representatives and even CEOs tell me their big plans; in many cases, they failed.

At first, the efforts by IMSI/Design did not appear impressive. They were copying what everyone else was doing. Or so it seemed. Because they were not; the early releases of TurboView were mere groundwork, showing prospective buyers the basement. They had to get the read-display DWG aspect of mobileCAD correct, before going on to advanced functions.

By contrast, it seems to me that most mobileCAD programs from other CAD vendors are finished products: they can view a drawing, maybe in 3D. That's all. Because this class of software tends to be given away for free, I predict that very few CAD vendors will develop their mobileCAD software beyond view-only status.

Even the advanced functions in TurboView were no more exciting than the simple drawing and editing commands found in arch-competitors, like AutoCAD WS.

This changed with the ground-breaking TurboSite program, the first mobileCAD app to take advantage of many of the sensors built into tablets, and not found in notebook computers. In addition to using the camera to take still photos and movies, and the microphone to record audio notes, TurboSite uses the GPS and accelerometer to locate the photos and notes in the drawing automatically -- as well as to locate the user in the building.

Version 1.1 is the next step in adapting tabletCAD to fingers. It added finger-friendly drawing tools. You sketch a shape, badly, with your finger, and TurboSite figures out what it might be. 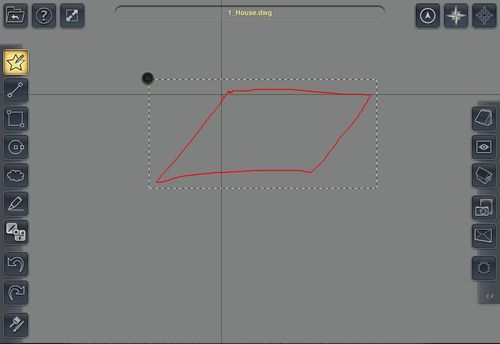 Professionals return to finger painting.
Here I sketch a parallelogram with my finger.

In trying it out, I drew shapes that roughly approximated rectangles, circles, ellipses, and even a star-shaped figure -- all of which TurboSite figured out correctly, well, for the most part. I mean, it can be a bit tough to determine if that trapezoid-looking squiggle should be interpreted as a square or a rectangle or a parallelogram or a rhombus. 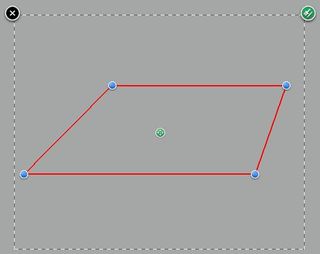 TurboSite made this straight-line approximation of my sketch. Tapping the sketch puts it into edit mode.  The green center dot moves the object; the black x erases it; the blue dots move the vertices; and the larger green dot brings up the properties dialog box (see below).

Once TurboSite straightened out the squiggles of my sketch into closed objects made of lines or arcs, it lets me edit the vertices. Here I was disappointed, however, because a badly needed function was missing: making segments perpendicular. I could not turn that rhombus into a right-angle rectangle. Maybe in v1.2.

The Properties dialog box is not too exciting, but it does let me apply line colors, line patterns, and line ends; and fill colors and patterns to my sketch. 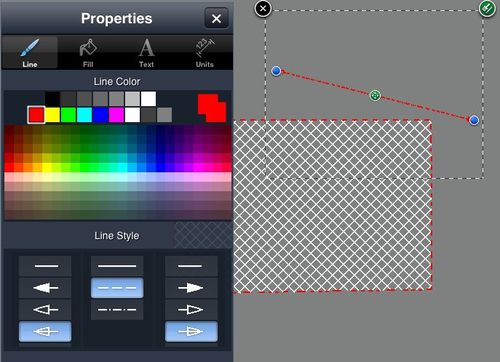 The price of TurboSite is an eye-popping $999, the highest amount that Apple allows developers to charge on its App Store. IMSI/Design tells me that this is professional software, and so it is charging a professional price. Their legacy of offering software at massively-discounted prices won't go away, though, and so it is $499 for now. In addition, they offer a free version that lacks the data recording functions. You can download it from here: https://itunes.apple.com/us/app/turbosite/id566736370

How many have they sold at the "heavily discounted" price of $499? Not many, says the evidence. The Apple store reports, "We have not received enough ratings to display an average for the current version of this application." The other hint is that the "Customers Also Bought" section is blank.

In the 99-cent app market created by Apple, it is hard for customers to take the $499 price seriously, as in "Seriously?" Nevertheless, it is good to see one CAD vendor taking the tablet platform seriously.

Now IMSI/Design needs to look out for competitors copying their functions obliquely (because some of the tech is being patented).

[Disclosure: IMSI/Design provided me with an Apple iPad 2 loaner on which to run the software.]

Regarding price, we appreciate your recognition of the challenges CAD vendors face selling professional software on a new platform that's best known music and games.

The good news, though, is there are so many advantages for mobile in the enterprise that I think we all know it will have an important impact at some point.