Through Germany with just a cell phone

Before leaving on this 3.5-week trip through Amsterdam, Hamburg, the Baltic Sea coast, Berlin, Bavaria, and Munich, I decided to leave my Canon digital camera at home, and use only my cell phone's camera. A bit of a gamble, but I've been to Germany so many times in the last decade that I don't need to take photos as much any more.

Well, it is just like getting used to any new camera, learning what it can and cannot do, primarily how it reacts to lighting situations.

The primary drawback I found was that cell phone cameras do not have optical zoom lenses, and I love my zooms. (The Canon I left home has a 10x zoom.) But I learned to do without, recognizing when objects in the distance were too far away to bother photographing (would end up looking too small in the resulting picture). 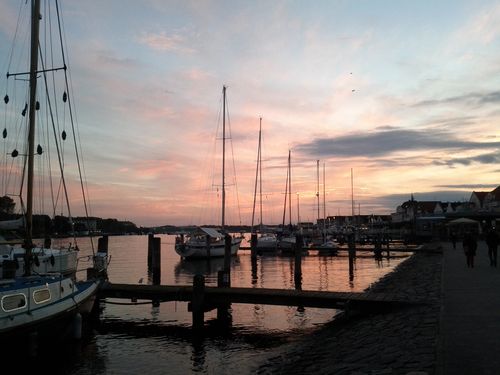 Sailboats at rest in the Baltic Sea port city of Travemünde, Germany

The primary advantage is that I can load all kinds of photo processing software onto the Android cell phone, something impossible with digital cameras. I paid $2 for some HDR software, which takes three photos at different exposures, and then combines them into a single high-dynamic range photo; it even takes care of moving objects, ensuring that only one set appears.

Stitched photo of the tallest-ceilinged cathedral in Europe, Wismar

Another advantage is built-into Android 4.x phones: the ability to take self-stitching wide photos, useful inside cathedrals and outside landscapes.

Self-stiched photo of intersection near City Hall in Wismar, Germany

So, two weeks into the trip and I've taken 400 photos with my Google Nexus S phone.

Posted at 01:02 AM in Travelogues | Permalink

it even takes care of moving objects, ensuring that only one set appears.