We're not going to let jetlag slow us down, and here we are back at the conference hall in Amsterdam with the unpronounceable name -- and soaking wet from the downpour that flattened this town this morning.

Update on the new corporate look for Bricsys: the redesigned Web site is due to go live Monday.

Last night, we spent the evening at The Heineken Experience, a former brewery that tries to make drinking beer fun. See photo below. 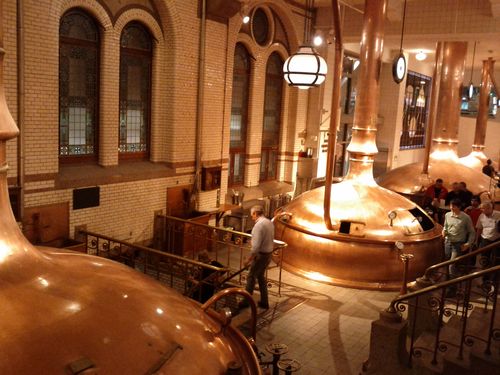 Bricsys has programmers in Romania, in two locations in Russia, and in Belgium, the home country. Unlike most other CAD vendors, Bricsys releases updates every month or so -- rather than one big release each year. For us journalists, this makes covering Bricscad difficult, because many new features are shipped with a new release, but many more are shipped over the following eleven months.

As a prelude to what's new in V13, we are getting an overview of what was added in point releases since V12 shipped a year ago. These include much faster regens for faceted 3D objects, loading of registered object enablers, snapping dimensions to solid features, scale factor for exporting WMF, EMF, and BMP images (how come Bricscad can have EMF, but AutoCAD can't), optimal compression of raster images, more efficient loading of huge (like 4GB) raster images using multi-cores and other technology (it is converted to Bricsys own format, so loads, zooms, and pans nearly instantly);  XOpen to open xrefs; improvements to Drawing Explorer.

Layer filters; but not the way you are used to them in some other CAD package starting with "A." When you choose a layer filter, an adjacent preview window shows you the entities displayed by the filter. Additionally, there is a new layer filter droplist that you can add to toolbars.

It's easier to add content to Tools palette. You can view blocks in drawing that are not loaded in Drawing Explorer. When inserting blocks, they are now sticky along lines and curves; moving the cursor flips the block. Drawing Explorer has a third tab, "Sheets." Printing and publishing improved.

Bricsys programmers have switched their software and hardware programming and testing to be OS-agnostic, because the Bricscad now runs on three operating systems, Linux, OS X, and Windows. New test software was needed, because "Multi-threading errors are notoriously hard to find, and to reproduce."

"I think cloud is the most-misused in the word in the industry," says Arnold van der Weide. A CAD system has three components: (a) user interface; (b) data manipulation; and (c) database -- all running on hardware. "The biggest mistake made by the industry is in thinking the graphics is the most important part; the data is the most import, such as 'who made a change to a part'."

A flaw in the database (file storing the drawing) is that it is discipline-specific and CAD centered. I think here he means that a architectural drawing cannot be easily used by mechanical engineers. Some crossover is happening, such as MCAD now understanding electrical drawings.

The stop-gap solution is PDM, product data management using metadata to define things like BOMs, so that production can work with CAD drawings.

He is worried by Windows 8 when it comes to the market end of this month, with its odd user interface. "It might create a real problem for our industry" in that Microsoft is trying to move users from desktops to tablets, which are not suitable for CAD.

The database is what the ODA does, as well as some of the data manipulation. And so ODA needs to think how to stream data from a DWG file to devices in the future.

That's it for now; more to come after lunch. 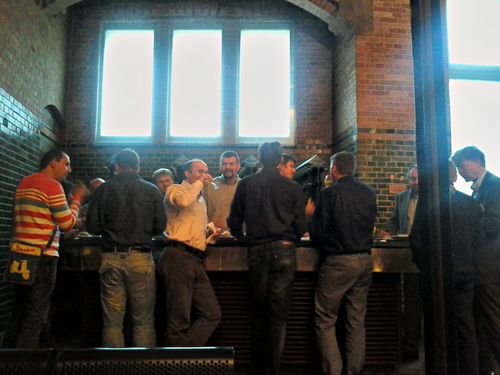 Lunch is over, and Mr de Keyser is telling us again what we heard last year, that Bricsys is turning their solids-based Architeturals software into a free API. A version will be given free and retroactively to all Bricscad Pro users. And the name changes to Tris.

Now we are getting a demo of how Tris works. It appears to me to be a plug-in to Bricscad, with the primary interface being through a toolbar. It features style families, where some styles take on the properties of a parent style.

Members of the Bricscad Russia department have taken the stage to tells us about Bricsys is doing in the area of mechanical design. Recall that last year they added direct modeling and parametrics from technology developed by LEDAS. Well, yes, "added," but also purchased the technology from LEDAS, and now Bricscad Russia continues to develop it.

What Bricsys is bringing to this market? They note that Dassault has Solidworks for 3D and DraftSight for 2D; Autodesk has Inventor for 3D and AutoCAD for 2D. In contrast, Bricscad has both in one package.

What's new is product struture modeling, where individual DWG files can be used for each component for collaboration. There is associativity between subcomponents and assemblies. A new Mechanical Browser lets you look through component, and there is an associative BOM. Hierarchies can be applied to imported geometry.  The library comes with 30,000 standard parts.

3D constraints are used to position subcomponents (parts), and they can be sued for kinematics. Degrees of freedom limits movement, such as rotations and translation.

Here is a view of the new mechanical add-on with the Mechanical Browser and an engine block make of many parts. 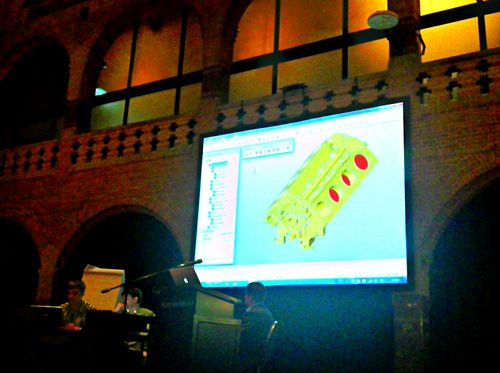 This MCAD software is part of Bricscad Platinum, and costs under $1,000.

As for future plans, they include the following stages:

5. Integration with CAD, CAM, PDM, and PLM through the help with third-parties

We're now seeing Power Dimensions for mechanical 2D drawings. This is the PDIM command that recognizes what the entity is just by passing the cursor over them. It determines the best fit location for the dimension, which is user-adjustable.

Can add alternate dimensions, underlines, inspection dims, GD&T characters, control the look of dimension geometry on a one-by-one basis, . Change made in the Edit Dimension dialog box are show immediately on the dimension after you make a change in the dialog.

All this is stored in standard DWG. Bricsys does not know yet how it will be distributed.

And One More Thing

to end off this conference, we are getting an overview of Chapoo without the plus. the upload, share, view, and annotate (comments on selected parts of files) functions are free. Comes with 1GB storage; shared folders; views 70 file formats to a tiled file format invented by Bricsys. Chapoo is connected to Bricscad, so this is their version of the cloud.

("Tiled" means that the files are loaded and displayed in a manner like Google Maps.)

While others do not need join Chapoo to see files, they have to join to access shared folders.

Now we are getting a demo of using a DWG file stored on Chapoo with Bricsys. Saved files are given a revision number automatically. More functions will be added next year.

Chapoo runs on iPads (and Androids) because it runs in Firefox and Chrome browsers. But Bricsys has written a Chapoo app for iPad. It uses the same file format as on the desktop. Tap once to view all pages, and then select the page to view. Tap the 'i' icon to toggle annotations made on the file, which are highlighted as yellow rectangle. To make an annotation, drag and release a rectange. An upload function will be added later.

Who is the target user? Not the Dropbox user, because it lacks the functions found in Chapoo. It is meant for Bricscacd customers. It has links to your Facebook and Twitter accounts.

What is the pricing? 1GB free. We see no need to be cheaper than DropBox. The idea is not that it keep all your files; it is only for files being shared.

Is there a version for iPhone? Not yet, but there might be one with different features. There will be an Android version, of course.

What about xrefs? This is under development. We will add an eTransmit-like function to Chapoo, which finds all xrefs and other support files.

Is there a locking mechansim? This is in Chapoo+.

Is there an API? Yes, every function in Chapoo+ is available, and so you can create your own "white label" Chapoo.

Are all previous version saved? Yes in both, but Chapoo hides the revisions, where you use Undo.

Can there be a link to work with AutoCAD? We have no problem with this.

What is the pricing of Chapoo+? We are still working on that, but substantially lower than Autodesk 360 with more functions. It will come onto the market in the coming weeks, months.

They already have plans for Bricscad V14, and will start working on it in a few weeks in the areas of user interface, extending 2D functions especially for MCAD, and integrating Chapoo deeper into Bricscad.

...and that's all f-f-folks! Tomorrow we'll have for you the opinion of Roopinder Tara about this event.

Posted at 01:57 AM in Travelogues | Permalink