Being the next Autodesk is as easy as A-B-C; here's part 1, C= Cost & Capability

Following the Bricsys Int'l Conference in Amsterdam was for me 14 hours on airplanes to get back to San Francisco. The book I read on the flights was less than compelling, the movies were were the onces I had managed to avoid at home, but the wine was flowing. Ah, plenty of time to culture pearls of wisdom.

I must confess to be a bit smitten by Bricsys, the company and its CEO Erik de Keyser. My usual cynicism failed me. But don't worry, it will come back. Already, I am considering Bricsys' chances against Autodesk, the market leader.

The 80/20 Rule. Autodesk has dominated the CAD market for over 20 years. On the motto of 80% of the capability of workstation CAD for 20% of the cost worked so well, we are inclined to say it was easy. It isn't. Witness the wrecks of companies that have tried to do it: Visio, Cadopia... a dozen IntelliCAD-based products. Companies like IMSI, Graebert, Ashlar, Alibre and others still try to match Autodesk’s success, but Autodesk gets bigger. Like pesky flies on a lion, CAD companies seem to be unable to do it any real harm.

SolidWorks. The one exception: SolidWorks. Is that the only CAD company to be launched during AutoCAD's reign that has not only prospered but risen to the top? Its success should be studied, be the stuff of books, like how to get ahead in the CAD world. But even the mighty SolidWorks has its limits. It only addresses mechanical design. Its strength is 3D. Autodesk still owns the rest of the CAD world.

Why did only a few companies make it while everyone else fell by the wayside or relegated to niches? I can only offer my analysis, confined here to simple ABCs – though not in that order.

C is for Capability – and Cost 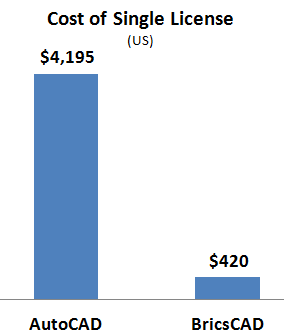 CAD software must, at the very least, be capable. A general purpose CAD program must be able to handle every aspect of the design of a company’s products. Forget the 80/20 rule. AutoCAD and SolidWorks made it big on the 80/20 rule. It won't work again. In 1985, 80/20 was compelling. PC's were novel. Competition was nonexistent. Since then, companies have continually offered more and more, trying to convert users.

Matching AutoCAD or SolidWorks feature by feature just won't cut it. The bar is high. Offer more than expected. Supersize it. How about a 120/20 rule? We love a love a bargain. Who wouldn’t love a perpetual license for the cost of one year subscription, for example. Or a vertical application for less than the cost of the base product? Offering 80% now would be suicide. You have to offer more to get attention.

The Cost Limbo Will Hurt. But don’t do the limbo on cost. Several companies have plateaued capability, but lowered prices continually or in jerks. It’s not doing their image any good to be seen as overly cheap CAD software.

If I ever need heart surgery (God forbid), I know I can get it in India. I know it will be cheap. But it’s my heart, darnit. What good is my money if my ticker goes? America still has the best doctors and medical schools, right? Likewise, the lifeblood of a company would be its CAD data. The cost of life and death makes the cost of CAD seem piddling. What good is saving a few bucks for the company if that decision makes me lose my job?

The perception of low cost CAD, which can really backfire. Let's say, tempted by the low price, a customer downloads your software. The first glitch and he will uninstall it. It might have crashed, it might have not imported your CAD file 100% accurately, maybe if was annoying in the way it asked for the serial number... whatever. It will be more easily dismissed than adopted. That $29 program will thereafter be referred to as a Piece of Carp. That customer will never look at another offer from you.

The Magic Price. Somewhere between $4,995 (a SolidWorks license) and $99 (Alibre’s suicidal low brief offer), there is sufficient room to operate. Hey, it's just software, right. It can be priced at anything. But do try to sell it a bit more than the cost of the DVD. Remember, to be in it for the long run, you have to have R&D, marketing... and other little minor details.

Bricsys may have hit the right price. Its BricsCAD sells for as low as $420. It has addons and extra capability, but it stays under $1,000. Bricsys seems to be able to not only be able to sustain itself, but also to have prospered.

More in another posting.

[Reprinted by permission of CAD Insider.]

Posted at 01:28 AM in Roopinder Tara | Permalink