Unlike previous SolidWorks media events, we are given less dazzle. Hot topics of “cloud” and “green” are only mentioned when asked about, and then downplayed. Wait... the only cloud mentioned was about balloon clouds used in 2D drawings. 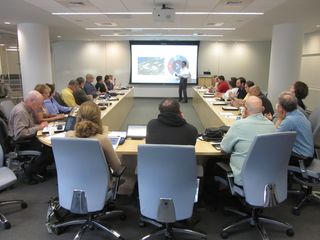 We were treated to a host of enhancements in the core SolidWorks product (though mercifully not all 350 of them), as well as two big new addons for electrical and mold flow. Most conspicuous in its absence was competitor bashing, which seems to have become the norm at press events at other vendors. As CEO Sicot tells us, “It’s not the “SolidWorks Way.”

SolidWorks seems to have the high road all to itself, while traffic snarls below. With a position of market leadership in MCAD, it is (for now) content to allow others to criticize, to stir up trouble, cast fear and doubt. Others brag of SolidWorks users who defect to their brand, I hear from one prominent SolidWorkers that hundreds are doing the opposite, may be too numerous to mention. “We’re just not going to play that game,” he says.

But CEO Sicot let us know at the press event that “half of all sales are from new accounts.” We just shouldn’t expect a press release every time that happens.

Has it always been that way with SolidWorks? It may be in the company’s DNA, if I may use the common marketing parlance. The way it quietly supports noble causes, from Rwanda* to the PMC (raising funds for cancer research) to helping inner city youth to baby incubators made out of old auto parts for the 3rd world. Withour any “Hey, look at me, how good I am.” Would a company like that trash the competition?  No, I don’t think so. 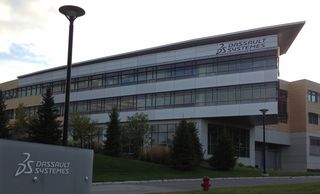 SolidWorks is in there somewhere. The Dassault Systemes campus in Waltham MA

In fact, with this event, the SolidWorks way may signal a return to basics, to customer needs and its core expertise. Whereas in previous years, where the company got way ahead of its own users, essentially telling them what was important (clouds), what was good for them (going green), we are hearing about better tools that users are actually asking for.

SolidWorks 2013 introduces new ways to make conic sections, which previously had to be constructed with B-splines. In another example, users of a previous release (SolidWorks 2012) can -–for the first time -- read models from the current release. Dozens of improvemements enfold, including "delighters," which they hope will generate applause at the upcoming SolidWorks World in Orlando. Many changes have to do with 2D drawings. Does it have the glamor of green? The loftiness of clouds? No. But necessary? I think so.

Is this a deliberate move to solidify (pun intended) its user base? Back to basics, a re-focus? A quiet and dignified answer to its harshest and loudest critics?

We’ve all spent a year since the last SolidWorks press event listening to contrary voices. The kernel change will blow your models out of the water. Direct modeling is the answer and history-based is dead. The parade of defecting users. The end is near, their voices rising, in chorus.

SolidWorks stands firm. They respond quietly, with dignity, with numbers. Quarter after quarter of rising sales, almost 2 million users… Not exactly an epitath. But a company that is strong, still a leader, therefore the envy of others. [This article first appears on CAD Insider, and was reprinted with permission.]