Siemens PLM and its pr firm are pretty excited that NASA used some of its software to design that latest vehicle to land on Mars, "from the initial concept to simulations of the harsh space environment."

You can read Siemens' overview how NX and Teamcenter were used at inr.synapticdigital.com/Siemens/MarsRover. The presentation is dull (unlike Dassault's Let's-tow-an-iceberg-to-Africa thingy), but at least Siemens is putting some marketing mileage into this prestigious event. 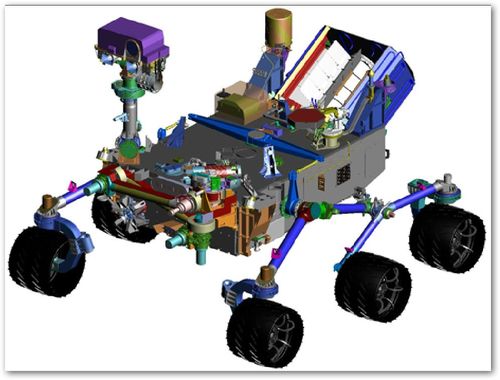 Where are the racing stripes?

NASA's clever "7 Minutes of Terror" marketing strategy is designed to get people excited about space travel again; more specifically, American taxpayers and their currently elected president. Because I don't know where the terror comes into play. The vehicle that landed felt no terror; for technicians, it's their job; for the public, it was Usain Bolt Day. What will NASA do as a marketing trick for the next landing -- "Six Minutes of Blood Curdling Horror"?

Nevertheless: Congratulations to the team!, because elsewhere I read that 70% of spaceships don't land on Mars cleanly. Or maybe it's 30% that don't. After Russia's last expensive screwup, this landing on Mars is neat.

PS: It is my take that man will not walk on Mars. Too expensive, too far away, too long a trip. Unless, of course, scientists finally get around to finding that stargate that's out there under the Antarctic ice...

I do share your lack of enthusiasm for this latest rover, even if it's the biggest baddest rover on Mars to date, it's still just another rover on mars.

Gone are the exciting days of Apollo and in are the boring days of probes and low earth orbit.