After testing browser-based CAD programs using HTML5/WebGL on Android, I checked out the scene for iPad. In brief, it doesn't work at all. 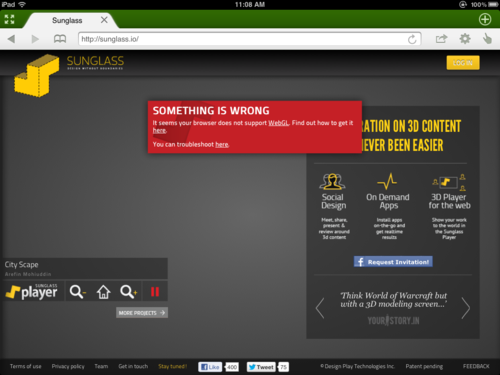 I tested the following Web browsers:

The next question logically to ask is, "When will WebGL work on iPads?" The answer currently seems to be, "Never." Apple banished Flash, and may well do the same to WebGL (with one exception).

The clue come from WebKit engineer Chris Marrin, who writes,

WebGL will not be publicly available in iOS 5. It will only be available to iAd developers.

(WebKit is the toolkit upon which famous Web browsers are built, such as Safari and Chrome. iAd is Apple's display advertising technology for iPad.) Note the qualifier Mr Marrin uses: "not in iOS 5." So maybe in later version.

Nathan de Vries has researched the problem, thinks that Apple will eventually make WebGL public, and figured out how to access it using private APIs. Others, however, feel that open WebGL is too much of a threat to Apple's AppStore by allowing developers bypass the store and its 30% mark up, as they do today with HTML5. (You can read "Enabling & Using WebGL on iOS" at atnan.com/blog/2011/11/03/enabling-and-using-webgl-on-ios/.)

We'll see who is right when iOS 6 comes out this fall. In the meantime, $150 Android tablets take the lead in terms of the WebGL advantage. Or use a non-WebGL product, like Globius and AutoCAD WS.