« Name the 3DEXPERIENCE company | Main | In upFront.eZine this week: we benchmark cloud rendering, and wonder how much it'll cost »

Vectorworks is one of the pioneers in desktop CAD, and now it is a pioneer in cloud CAD.

The company began in 1985 under the name Diehl Graphsoft, first releasing its 3D architectural software on the Mac, and then extending it to Windows in 1997. In 2000, the company was acquired by Nemetschek after the German company failed to plant its Unix-based AEC software in the United States. Today, the company is known as Nemetschek Vectorworks, and its founder, Richard Diehl, is still chairman of the board.

Q: Vectorworks is known primarily as architectural software, yet you added a solid modeler. Tell us about that.
A: We added Parasolid with Vectorworks 2009, because we saw BIM would evolve with robust 3D technology as being core to architectural design.

Q: Parasolid is mainly used for mechanical design, and so isn't it unusual using it for architectural software?
A: We saw the PLM community had already figured out the concept of BIM years ago, and decided that Parasolid was an integral technology in making it possible. What better way to build a BIM solution that works than to use the world’s most powerful 3D modeling technology kernel?

Q: Do other AEC products use Parasolid?
A: Yes, Bentley does, but Vectorworks is the only architectural package on the Mac to use Parasolid. 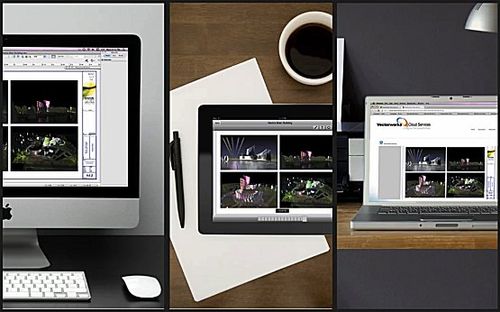 Q: Let's talk about your cloud offering. You released it just a month ago. How is it going so far?
A: We are seeing a decent amount of initial uptake, and people trying the service in USA, Canada, UK, Portugal, Denmark, Ireland, and Spain; we just added Germany, Switzerland, Austria, and Liechtenstein. We have seen a spike in our usage, but we are still early in the offering stage.

Q: Of the people using it, what do they like about it?
A: They like the idea of freeing themselves up to work, while viewports and sheets are calculated in the cloud. They also like the simplicity of our Vectorworks Nomad app for the iPad. They like its uncrowded interface for markup and communication.

Q: What about Android?
A: We get asked about that, and it is coming later this year. We began with iOS mainly because 55% of our user base is Mac-based, and so we assume this majority also uses iPads.

Q: What are your biggest hurdles in introducing it to other countries -- is it technology?
A: No, not technological, because we use Amazon Web Services, and so countries do not matter. The reason for the staggered releases is due to the need to translate the app and Web interface to local languages, as well as the time it takes for submissions to clear the Apple App Store [for the Nomad app]. We are expanding next to Belgium, Netherlands, and Luxembourg, and then Japan later this year.

Q: What are the biggest challenges to your customers accepting cloud services?
A: It is no different than introducing revolutionary new tools on the desktop. People have to be willing to fundamentally change the way they work. Also, we have to deal with different mindsets of what you should be able to do on the cloud. Complex model design will remain on the desktop, but non-interactive workflow steps that are compute-intensive will move to the cloud -- generating sections and renderings, for example -- to allow the user to keep working on other things.

Q: Vectorworks allows just 1GB of cloud storage. How does that compare with other cloud services?
A: We are evaluating raising the limit. Because people are still trying it out at this stage, we believe the storage is lower than will be in the future when more users more consistently adopt cloud services into their workflows. The cost of storage is downward, and so we can pass on that advantage to the user.

Q: Is the biggest selling point the cloud computing, not so much the storage?
A: Yes, that things can be computed. Sheet layers contain viewports showing elevations, sections, 3D rendered views, and any time a change is made, the viewports need to be updated; and on large project this can be time consuming.

Q: Is the cloud available within the the Vectorworks interface?
A: There is a separate desktop app that runs in the background. Users can decide whether to manually sync or have the file synchronization occur on a schedule. They specify which folders need sync; these can be the cloud services folder, or can reside as shortcuts.

Q: Has the price of computing services been determined?
A: Not yet. We are still evaluating the statistics of computing time being used. So, it continues to be free for Vectorworks Service Select subscribers for now; at some point, we intend to charge for 3D credits while continuing to provide storage and 2D credits for free.

Q: How do you measure acceptance of cloud technology? Can you give us any numbers?
A: Right now we don’t have hard numbers to share with you, but as the system matures we look forward to having more details. We are looking to expand the services available to our customers as we continue to build our Cloud Services platform. For instance, we recently linked with CadFaster for real-time collaboration and markup of our 3D models. We continue to look for new solutions to develop and other solutions with which we can partner

[Reprinted by permission of CADdigeset.com]