« Of which Apple needs to be afraid | Main | Which Web browsers can run 3D CAD? »

Generation 3.0 online CAD busting out all over!

Shortly after the Internet become consumerized in the mid-1990s, the first promise for online CAD was made by VRML -- virtual reality markup language. It was a way for Web browsers to display 3D polygons by specifying the locations of vertices and edges, along with color, surface textures, and so on. It was so exciting a concept that I even published a newsletter about it (CAD++VRML).

VRML was efficient for our dial-up systems of the time, but didn't get beyond a promise due to its clunkiness. With high-speed consumer connections towards 2000 and the resulting Internet bubble that came from the false "we can do anything on the Internet" mentality, we saw the first generation attempts by CAD vendors: the DWF substitute format from Autodesk, Alibre server-based CAD from Alibre, and all kinds of plug-ins for Web browsers to display CAD files natively. There even were CAD packages named in honor of the Internet, such as Pro/E 2000i and AutoCAD 2000i. CAD systems integrated Web browsers and could open files directly from the Internet (what marketing people today call the "cloud"). All that, by 2001.

Now in 2012, we are into the third phase. All  kinds of new teams are this year independently creating the next generation of 3D CAD in the Web browser, and I'm not sure why.

Maybe the the technology has matured and dropped in price sufficiently that they don't need the subsidy of a mother CAD corporation. Or maybe they got frustrated by the slow pace of development by the likes of SolidWorks V6 and AutoCAD WS. 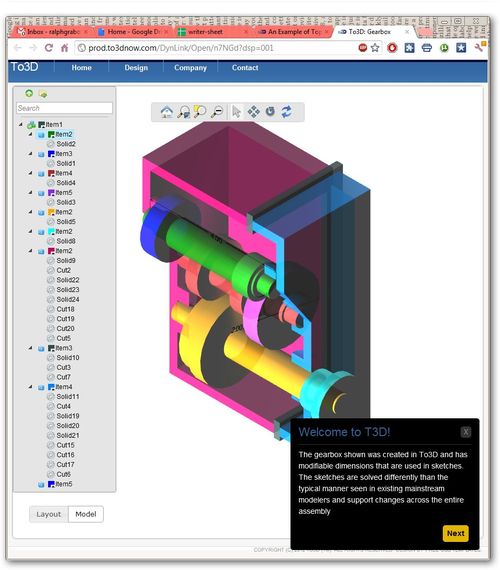 The technology they all use is HTML5 and WebGL, which limits their software to running properly in Chrome and Firefox.

When I ask them "why are you doing this," they each provide the same answer: because existing CAD packages don't do a good job of sharing CAD models, never mind that they are s-o-o-o expensive.

Busting out. Kind of freudian there and a precursor to going bust. My conclusion about all this CAD on cloud junk is that they are trying to sell into a group of people that use software to produce things that have to work to a certain minimum standard. And proveably so. Wheels have to turn and planes stay up in the air. So along comes this bunch of cloud clowns that talk big and have varying price tags attached to their programs with only one thing in common. They spell out nothing for guarantees of preformance or security. TCO is never covered.

The cloud is aptly named in this regard. They want you to buy into something nebulous. It is neither opaque or transparent by design and even close up details are deliberately fuzzy. And they want CAD guys who have to stand behind their work to get excited, HA!