I'll have a fuller report on my mid-week trip to PTC in next Monday's upFront.eZine, but thought should follow-up from the blog posting of two days ago.

PTC invited four journalists who had written about Creo 1.0 last fall. During the five-hour session, we provided Creo product managers further feedback on our experience, and then quizzed them on how they deal with UX (user experience). We gave examples of unexpected behavior in the software. We brought up the confusion over the "Creo" naming system.

We were shown some of the new features in Creo 2.0, most of which we are allowed to report on. Perhaps the coolest one is that previews of operations are not just previews; they are the operations in real-time. For instance, extrude into a body, and as you drag the cursor to specify the depth, Creo (a) knows you want to cut into the body, and so does not make a solid extrusion and (b) shows the cut in real time. As illustrated below, you can see the parts through the trapezoid cutout.  (When you move the cursor back up, the hole heals and Creo extrudes the trapezoid.) 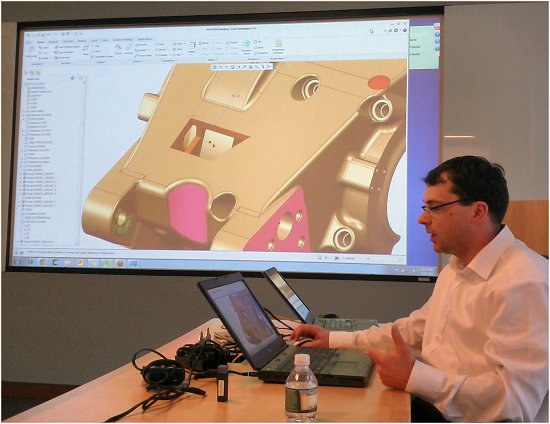 Demoing the realtime extrude/cut feature in the upcoming Creo Parametric 2.0

Interesting tidbit: they are porting their first software to iOS (ie, iPad et al), and PTC says that the job is easier for them than with other CAD vendors. How could this be? Well, Pro/E was first written for the Unix operating system, and iOS is based on Unix as well.

Cloud? Never came up, except by one journalist noting that portable devices are strongly linked to the cloud. Even as we talked on the East Coast, over on the West Coast Autodesk launched its cloud-based PLM system. Different vendors have different priorities.

In summary, it is clear that Creo is a work in progress, just as Synchronous Technology is. Both products suffered from too much launch hype. After four releases, SychTech is much better; Creo probably will be, too. Indeed, PTC told us of features already mapped out to version 4.0 -- which we can't talk about!

Posted at 03:34 PM in Travelogues | Permalink

Based on the above scren shot, PTC looks to have come a long ways. But other software has been doing things like realtime preview of features for a long time now. They have a modern UI for a long long long time now. At this point, I don't think they can catch up again.

hmm, cut extrudes on drag were part of Creo 1.0

Still menu-manager remains in Creo. This company will serious struggle against SolidWorks or Inventor when it takes them years to get the same functionality as their competitors.

GET RID OF THE MENU MANAGER! ITS HORRIBLE!!!!!!

well, maybe it is easier to port to iOS due to PTC's UNIX heritage, but then again PTC's UNIX heritage seriously hurt them since their competitor solidworks went native Windows and produced a product that compared very favorably - pro/e was a "port" and a user was always reminded of it via sluggish UI, etc.