Autodesk flew in about 120 media (my estimate) from around the world for a two-day event celebrating the launch of its 2013 line of software. We're starting off with ceo Carl Bass telling us about how the portable computing market is taking off for Autodesk -- something that he predicted two years ago. 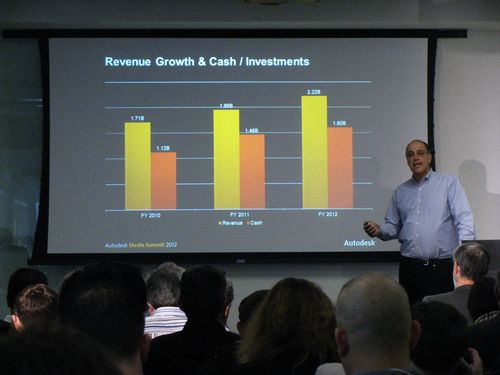 For instance, 300,000 files are now uploaded to AutoCAD WS a week. This works out to 2.2 files per user (calculated from 7 million downloads of WS) per year, up from last year's number of 1.8 dwg/user.

He's announcing Force Effect for doing free body diagrams and analysis on the iPad. [Internet connection went down... and we're back.]

[We switched from Windows 7 to Linux, and trust that the Internet connection will be more stable. Yup, so far it is!]

We're still hearing from Mr Hanspal, who says that "Autodesk 360" is the overall name for all cloud-based products. He reports that all of Autodesk's new services serve to make their software even more democratic -- oops, there's a catch: the greater democracy is available only to those who pony up the annual subscription fee.

Q: How are you linking products in bundles, through APIs available only to internal developers?

A: We always use open APIs. When we link Inventor with AutoCAD, anyone else can do this too. In terms of the cloud, we are using open APIs and open source software, but on iOS devices, it is a different world (ie, using Apples APIs).We have demonstrated using open reaches as many people as possible.

Q: How is getting rid of industry-specific editions of Revit going to work?

A: We didn't do that. We now have one run-time version of Revit that installs with different configurations. This gets rid of multiple installations.

A: People using high end software wear that as a badge of honor. There is a trade-off between power and simplicity. When you can combine power and simplicity, you get the best design. Applications are now being packaged in different ways. How do I make advanced software easy to use, without lots of buttons.

Q: Is there an Apple tax on software sold on your store?

A:We are not charging the developers anything.

Q: 75% of your business is outside the USA. Where are you planning to expand?

A: What is the GDP, what is the piracy rate? Top countries are the G8, which are stable. The fastest growing countries are BRICS, but also the most volatile. Viet Nam, Philippines, Turkey are now growing fast.

Q: Are products on the app store vetted?

Q: Clarify that cloud services are only on subscription?

A: Everything is available to subscribers. Over time, we think the primary feature to subs will be cloud, with upgrades a side effect. We are still working on what will be a la cart, like doing a moldflow analysis. There will still be things available on Labs free. Viewers will always be free. Not sure about Sync Settings.

Q: What about cloud performance issues (or SLA) in countries outside of USA?

A: We monitor cloud performance in 100 locations around the world. How long does it take to get a 3D model back for viewing? We want all customers to get a reasonable response. Japan has better performance than in Portland.

Q: Are you going to have too many products? I [Martyn Day] am starting to get lost.

A: That will be our new standard: does this lose Martyn? When Google did Docs, they did a half-job; what Google didn't do is that they didn't image a cloud-centered experience, but made something cheap and easy. "What really is the difference between documents, spreadsheets, and so on?" they might have asked themselves. Office apps are a throwback to the old days, when a word processor did words, spreadsheets calculated. Google should have made a single app to handle all office tasks.

"12 million using our tools" is the number every speaker mentions.

Scott Reese wants to tell us about how Autodesk is breaking down barriers to using simulation analysis. For example, LED lamps generate more heat than CFLs, and so the heat needs to be dissipated. Now he's talking about the XBOX 360, which suffered from the "red ring of death" due to overheating (I think because the unit was rushed to the market), which cost the company a billion dollars.

[Linux is keeping the Internet connection here at One Market Street, where Windows 7 could not. I wonder why?]

Autodesk has spent a half-billion on acquiring simulation software. Traditional barriers to using simulation sw are (a) ease ofuse, (b) hardware requirements, and (c) cost. In contrast, Autodesk thinks that everyone involved in design should be aware of the impacts.

Speaking about ForceEffect on iPad for doing sketching and adding the science behind it. Excellent for students, Mr Reese tells us. Autodesk now has CFD (computational fluid dynamics, like a wind tunnel) running on iPad via computation happening on the cloud:. ForceEffect Motion coming out soon with actuators.

Autodesk 360 Simulation "is what will really transform the overall simulation landscape." Pay-as-you-go simulation model access every type of simulation you need.

Robert Kross has a new title: senior vp of design, lifecycle, and simulation. "Good news," he starts off, "I get to talk about PLM." Not sure if this is supposed to be a joke. He thinks the PLM market is young, at only 10 years old. 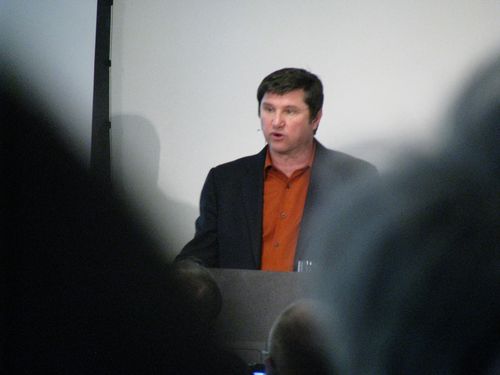 He shows that a tradPLM that would cost $4 million to install costs just $280,000 from Autodesk. Competitors would say that Autodesk is leaving $3.7 million on the table, but customers would prefer the lower cost, 'natch.

I had been wondering if Autodesk will be adding tools to AutoCAD for converting 3D point cloudsto 3D objects, semi-automatically. But Mr Mathews seemed to indicate that instead Autodesk will make it easier to work with point data, for he showed making copies of scanned lamp posts.

He says Autodesk has technology to stream millions of points to iPad in realtime, because point cloud data can overwhelm hard drive capacity.

He admits that LEEDS-designed buildings don't work out, because occupants don't behave as expected -- using more electricity or air conditioning. No surprise to me, as a former transportation engineer, and so I know very well the problem of human "irrational" behaviour. He says the solution is to place thousands of sensors in cubicles and other parts of the building to monitor use in real-time.

[During the break, the video cameraman next to me unplugged my computer. Compute resources may be infnite here, but not the electrical power!]

[Disclosure: Autodesk provided me with air travel, hotel, some meals, ground transportation, and a recyclable notebook.]

Posted at 09:25 AM in Travelogues | Permalink