« In upFront.eZine this week: mobileCAD is bustin' out all over | Main | MobileCAD apps busting out all over, and now with a twist... »

Low-cost CAD has innovative in-drawing UI elements, too, just like the big boys

It's not just the monster* CAD vendors with their millions in R&D spending who come up with new ways of interacting with our beloved software. Sub-$1000 and even free CAD systems are doing their own thing, even as they avoid the Microsoftian-view of how a UI should operate (that is, ignoring the awful ribbon interface).

Last fall, I reported on the new in-drawing interface Bricsys added to the 3D direct modeling component of Bricscad V12. They call it the "quad cursor," because it displays five buttons. Well, before competitors of Bricsys start guffawing, it starts with a one central button; when you move the cursor over it, four more buttons appear. 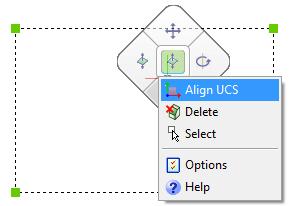 The center button is the last-used command, while the diamond ring of four present three of the most likely other commands for the selected part, plus the More button that drops down a shortcut menu of other options. The colors of the quad cursor indicate the type of element being edited. Here, green means a face is being edited.

Meanwhile, over in the land of free, a recent update to Dassault Systemes's DraftSight adds mouse gestures.  These are four or eight movements that activate a command. Four is good when you don't want to be overwhelmed, eight is the max.

To use this one, you press the mouse's right button, and then move the mouse in one of the four (or eight) directions: up, down, left, etc. This starts the command that is associated with the movement, such as Line or Offset.

When you do a longer drag, a wheel segment appears on the screen briefly, visually reminding you of the command you activated. Naturally, you can also look at the command bar.

When you do a very short drag, then the full wheel appears with all four or eight icons representing the commands. 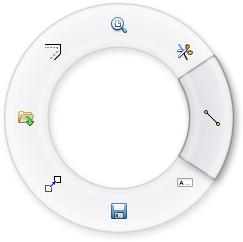 You can change the command associated with each movement through the Tools | Mouse Gestures option. (Graebert has a license to use this IP in its ARES software, upon which DraftSight is based.)

*) "Monster" is defined here as $1 billion or more in annual revenues.

[Disclosure: I write ebooks about both CAD packages at www.upfrontezine.com/ebooks.]

Posted at 09:13 AM in Free CAD Software | Permalink

Mouse Gestures in DraftSight was implemented by the DraftSight development team (and added to DraftSight first). Graebert has a license to use it in their distributions of ARES; DS SolidWorks owns the IP of Mouse Gestures.

This doesn't look greatly different from Autodesk's four-year-old Steering Wheel, one of the UI changes introduced along with the Ribbon in AutoCAD 2009.

I find it annoying and leave it turned off in AutoCAD, so the belated presence of something similar in competitive products doesn't strike me as particularly innovative or desirable.

There is the same round look as the Steering Wheel in AutoCAD, but the operation is quite different. The Steering Wheel is for navigating through a drawing (not sure why that is needed in LT!) but these are for accessing commands -- more like the in-drawing device used by Inventor.

Agree, more like the Inventor (Fusion) Marking Menu which I quite like using although not a frequent Inventor user. Would like to see that in other Autodesk products.