How to copy photos to your computer faster than Picasa

Google Picasa is great software for processing photographs, but it is painfully slow copying files from digital cameras that have large memory cards. Mine has a 4GB memory card, which is small for today, but can hold 2,000 photos.

When it comes time to get the photos off the camera, Picasa slows to a crawl. The reason is that Picasa checks through all thousand-odd photos to see which ones have already been downloaded. This just takes too long, and I found a faster alternative:

2. When Windows displays the AutoPlay dialog box, choose "Open device to view files with Windows Explorer." (If this dialog box does not open, then open Explorer on your own.) 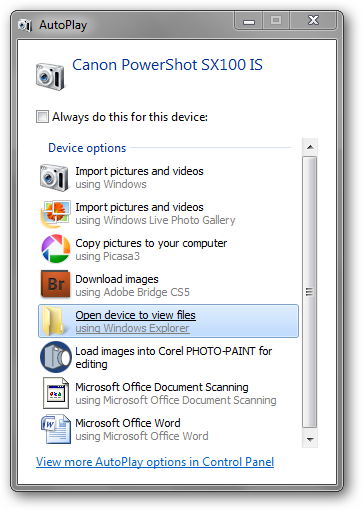 3. The camera appears as a disk drive on your computer. Use Explorer to navigate to the folder containing the photos. In the case of my camera, Canon thoughtfully places each day's pictures in a folder of its own, such as "272Canon" shown below. 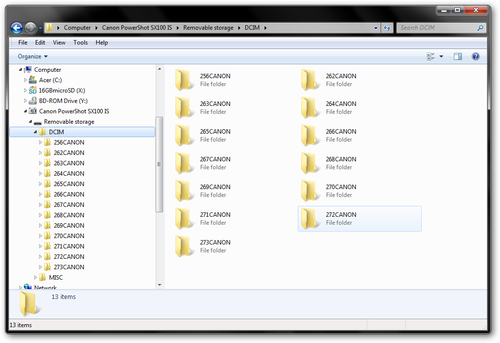 4. Right-click 272Canon, and then choose Copy from the shortcut menu.

5. In Explorer, go to the Photos folder under Favorites, and then choose Paste. 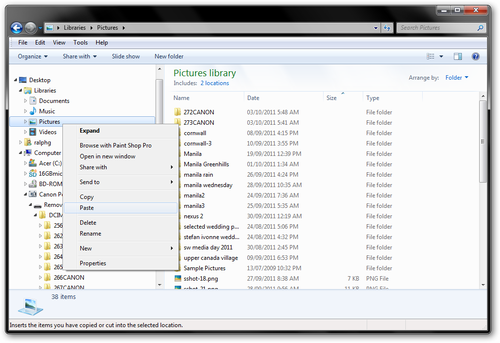 6. Now fire up Picasa, and it within a few seconds it will find the newly added photos.

Posted at 07:01 AM in Digital Photography | Permalink