« Figuring out the path to making CAD more efficient, without the screw-ups | Main | Photos from Manila »

Overnight, a Classroom Sprung Up

My role has changed from consultant to teacher, and during the night I wondered how I could get the eight drafters to practice what I teach them. Head drafter Christie, who is almost like mother to other drafters, had figured it out. When I arrived in the morning, she had had the IT department transport their computers to an unused area of the office, with my computer sporting a second monitor facing the "class." Overnight, a classroom had sprung up. 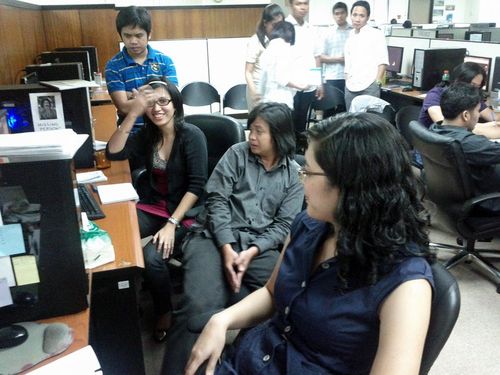 The "students" in my class at PTCC.

In the morning, I taught geometric and dimensional constraints and parametrics, followed by dynamic blocks after the break. Two in the class are especially keen, working ahead of me, figuring out how to apply the lessons to their drawings. In particular, Paulo figured out dynamic blocks on his own, after hearing me mention them earlier in the week. A day later, he surprised me by showing a LISP routine he'd written that did the same thing as AutoCAD 2012's Drawing Layout (ViewBase), but ran faster and was easier to use.

After lunch, which tool place at the France Deli, Christie pointed out areas of drawings that are tedious to draw. For example, the distance between mullions is typically 1500mm, and so drafters use the DimContinuous command repeatedly, picking points that would amount to thousands of times for a 45-story structure.

We wondered if QDim would work. (It places all continuous dimensions at once.) But it would not recognize blocks. I suggested drawing a line along the blocks, and then using the Measure command to place a point at each block, at which QDim would attach its extension lines. It worked, and they were pleased.

And so it went, all day Thursday and Friday, as the drafters pointed out points of tedium, I suggested alternative approaches, and we all worked out if the alternatives would work.

For example, we got dynamic blocks working to more quickly fill walls with insulation symbols, walls that are interrupted with irregularly-shaped mullions. We found that SuperHatch could also do the job, except that it places an excess number of boundary polylines -- excess defined as more than 1. (The Insul linetype was not found useful.) In the meantime, Paulo asked me where the acad.pat file was located so that he could write custom insulation hatch patterns.

Outside of the office, I am getting into the cadence of jay walking. Some 3-5 million commuters drive into and out of Manila each day. I'd describe the driving and the jay walking as a game of brinkmanship as every driver tries to edge out his neighbour and squeeze ahead, and groups of pedestrians squeeze between cars. After all, all you need is 1mm of space between. Or as someone at the office put it, it's good to know the thickness of the paint on your car. Remarkably, cars show no damage.

Posted at 08:18 PM in Travelogues | Permalink

Really enjoying these real world posts, but the desire to improve displayed by the 'students' is especially delightful.

Your description of traffic sounds very much like in India. We routinely wait in between lanes of fast moving, irregular, random, unpredictable traffic with 6 inch gap in between and cross roads.

It is a miracle how many of us are still alive to tell the story!!

I found your postings about helping this company fascinating and I learned a few things I can use as well.

The type of work they're doing made me think of Evolute Tools for Rhino. I know it means introducing new software into the mix but I think the Evolute plug-in could automate some of their processes. Thanks.