« Roopinder asks, "What were they thinking when Autodesk bought Instructables?" | Main | Autodesk's ceo talks about the double-dip recession, and we listen in »

Well, whod'v'e thought there'd be two big significant computer conferences, one week after the other, out here in Vancouver, Canada. Last week, it was SIGGRAPH, which pulled its second lowest attendance since 1983 in its first time outside of the USA.

This week, it was LINUXCON, this one put on by The Linux Foundation, who most famous employee is Linus Torvolds, who I actually got to see waiting for the elevator! When you've been in the computer biz as long as me, you get used to thinking everyone who's a founder of some sort is getting old now. Not Mr Torvold, who is now only around 40, having started Linux at age 20.

When you work out the math, you arrive at the fact that this year is the 20th anniversary of the launch of Linux, a new version of Unix based on Richard Stallman's edict that software oughta be free, freely modifiable, and so on.

To celebrate the 20th, LINUXCON had a display area of some 120 historical items, several videos, and a timeline of accomplishments. Here is the famous red hat and an early Linux watch made by Casio and IBM. 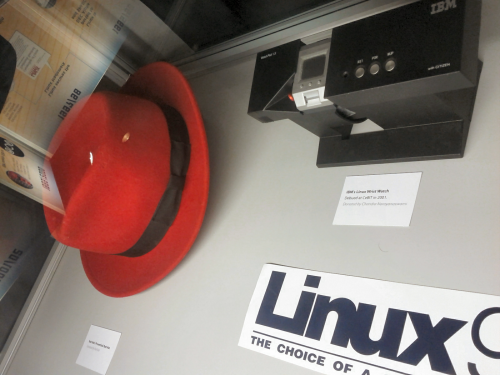 I could have contributed my copy of CorelLinux.

The keynote address by Linux Foundation exec director Jim Zemlim was greeted by cheers and laughs he scoffed at fears of Microsoftian nay-sayers, such as Bill Gates calling GPL "Pacman-like" and Steve Ballmer calling Linux a "cancer." Mr Zemlim pointed out that GPL was indeed a Pacman, swallowing up proprietary licences, and Linux is indeed a cancer, a cancer for good that runs most computing devices in the world today, and even has Microsoft contributing device drivers.

He showed a video birthday greeting from Microsoft, which gave a slanted version of the history of the antagonism of Microsoft against Linux, slanted as it showed Linux being anti-Microsoft, such as a penguin throwing a rock against a window made of the Windows logo, behind which a cowering Bill Gates hides. There are other scenes of the penguin being nasty -- as seen by prejudiced Microsoft eyes. The video ends on a hopeful note, that perhaps Windows and Linux could work together -- again, a false sign, for Linux works with Windows, and Microsoft is generally the unwilling one. 'Course, it must be lonely for Microsoft, pretty much having now the only OS not based on Unix in some way.

Mr Zemlim is a good cheerleader, pointing out the false claims made by those fearful of Linux, and the successes of the last 20 years. He jokes that LINUXCON was forced to be held in Canada, because of the threat from US patent 9,999,999 that describes "a method for socially-awkward people to gather..." He says out that a world without Linux would be a world without nuclear reactors, trains, super computers, cell phones... It would be monochromatic, instead of in color.

He adds that Linux is on the right side of history against proprietary systems, fighting legal FUD, technical FUD, usability FUD, profitability FUD. He shows slide after slide of false claims made by opponents, such as Forrester Research's George Colony predicting in 2004 the demise of Red Hat Software; this year, Red Hat is set to make $1 billion in revenues.

"Linux is the largest face in computing today because of freedom." He does admit, however, at being wrong in declaring four years in a row that this is the year of desktop Linux.

I am surprised at the small size of the event. A baker's dozen or so of 10x10' booths. Some 20 media. A "packed" keynote hall with an audience size perhaps half that of a SolidWorks World event. Just one minor (relatively speaking) specialized software package can attract more attendees than the most used operating system in the world?

Jim Whitehurst is now the ceo of Red Hat Software, and his keynote topic was what to expect for the next 20 years in Linux. He began by looking at the last 20, giving concrete examples of how the openness of Linux gave rise to significant improvements.

For example, the US Navy needed an anti-missile missile, which required a real-time OS. They added code to Linux so that it could handle real-time operations, contributing it to everyone. This code made its way into the Linux used to run most stock exchanges in the world. "Linux allows new innovations not possible otherwise," such as Google, Facebook, and Android.

Favorite quote: he showed a chart of sales of operating systems, and added, "This is IDC data, so it must be wrong!"

And then it was time for his predictions for the next twenty years... 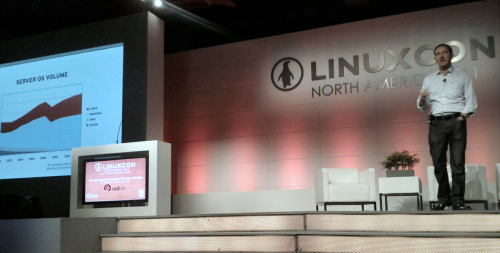 Jim Whitehurst is  the current ceo of Red Hat Software.
Shown at left is the infamous IDC chart.

...well, he doesn't know. That was the point of the lead up in which he described the strange twists Linux has taken so far. The same is forecasted for the next two decades. Ta da!

Linus Torvolds was scheduled to speak late in the afternoon, but unfortunately I could not stay that long.

I don't believe Linus Torvalds is a Linux employee anymore. He was hired by Microsoft and is working on a next gen OS codenamed Midori. I think he was hired a little over a year ago, but I'm not positive on the timeframe.

The head of LINUXCON said that Linus is an employee of The Linux Foundation, and working at their offices in Portland, Seattle.

Nevermind. After doing some research to reread the story, I see it was an April fools joke story.

I can't believe I didn't catch that the first time.

I am glad you researched it, because I too thought he'd spent a short stint there.

>I am surprised at the small size of the event.

Well, it could be that they don't need to push Linux down our throats, no?