The event's host is hinting at a combination of AutoCAD Mac and AutoCAD WS. See http://www.livestream.com/autocad

Amar Hanspal says, "More than ever, we are committed to the Mac platform."  Introducing AutoCAD 2012 for the Mac. Running through the new features to get the Mac version to catch up with the Windows version. Available on Friday, 19 Aug.

(Over on WorldCAD Access, we are introducing the first dual-OS ebook for AutoCAD, Tailoring AutoCAD 2011/12 for Windows & OS X. See tam12.) 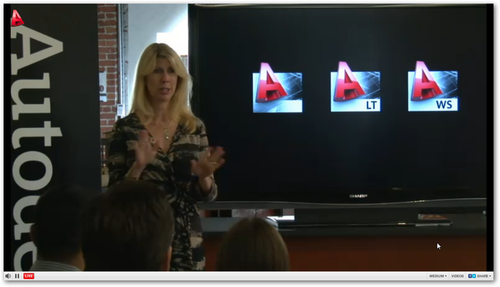 #1 request for a lower cost version for Macs. Announcing AutoCAD LT for Mac, purchase only from the Apple store. First professional CAD app on the app store, in USA and Canada only. $899 -- the most expensive app on the Apple store? People are used to paying maybe $50 for Mac apps, so we'll see how a $900 one does.

Now interviewing beta testers. They say the product is wonderful. "The missing features have been added in." Really likes in-place xref editing. 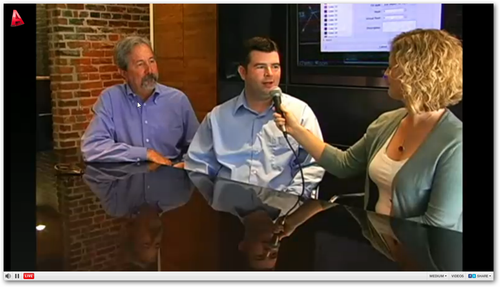 Now getting some brief demos, all of which we already know from AutoCAD 2012 for Windows. "Sets the standard as AutoCAD as the most modern modeling product." Works with Lion (I am not sure if Autodesk got the first release of Acad/mac working on Lion yet; there were some compatibility problems with the latest release of OS X.) Network licensing works with both Windows and Mac networks.

"AutoCAD LT for Mac is really similar to AutoCAD LT." Tagline is "For premium drafting." No student version, because of licensing issues on the Apple app store.

AutoCAD WS for Mac... we're seeing a cutsey video of two cartoon characters escaping an iPhone to run WS on a Mac, but nothing more. We are told to check the help files. 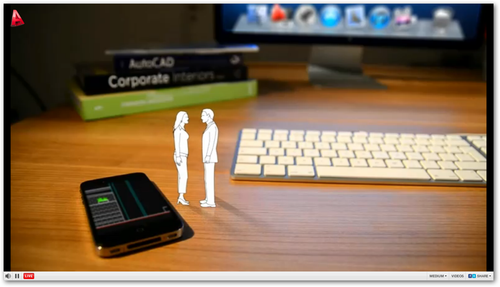 No mention of Linux or Android.

Don't want to pay for Acad/mac? AutoCAD for Mac 2012 is offered free to students and educators through the Autodesk Education Community,

Q: "Isn't Acad/Mac already the LT version?" The question refers to the fact that the original Acad/Mac lacked over 30% of AutroCAD 2011's commands.

A: "They are definitely different products."

Q: "Do they work on Snow Leopard?" The question refers to the fact that the earlier Webcast made it sound like the new software worked only with Lion.

Q: "Do you have any questions coming from Twitter?" 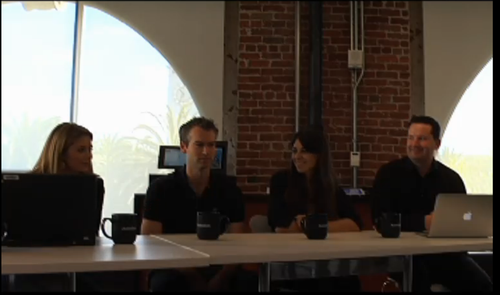 Q: "Why does AutoCAD WS require an app to work properly in OS X?" This question refers to the fact that WS was supposed to be browser-based only.

A: "Our goal was with WS to work on all platforms. [Android is mentioned.] We are supporting the Web and the desktop, so that users can work offline. This is just one more flavor of WS."

A: "This gives WS a native feel, something you don't get with a browser."

A: "Command line is turned off by default."

Q: Will Acad/LT/Mac be released outside of US/Canada?"

A: No plans at this time.

Q: Will there be Revit for Mac?

A: I understand that there are no plans at this time.

A: Startup is different, icons are larger, a few UI elements shuffled around due to missing components.

Q: What video cards are supported?

Q: Does WS Mac have any APIs for plugins?

A: Not yet, but we have plans.

Q: Which should a new Acad user buy, Windows or Mac?

A: The company line is that there is no difference. Most popular Mac [for AutoCAD?] is the 15" Macbook Pro. For big drawings, I would get as much memory as possible. [That means Windows!]

Q: Can we get those mugs you have?

A:  No, they are just for Autodesk employees at this event.

Q: First question from Twitter: "Will there be a native Windows app of WS?" I get the feeling that the native Mac/Safari is too slow, so a native version is needed. Recent benchmarks show Safari as one of the slowest browsers overall.

A:  Not something we are working on right now.

Q: What video acceleration is used, OpenGL or Cuda?

A: OpenGL. Cuda is a programming language.

A:  No. Not at this time. Cannot speculate on future products.

A: That was a long, long time ago.

A: Something we are planning. WS is changing rapidly, with an update every 3 or 4 months. You can expect some good news this year.

A: We will be adding layers to the mobile apps on Thursday.

Q: Is there a DWF viewer for Mac? [LT version on Apple store states: "Electronically publish and distribute drawing sets in a single PDF file for fast, secure collaboration." So no DWF.]

Q: Do my LISP routines work on Mac?

A: Mostly, but Mac does not have DCL, Microsoft dependencies, or VLISP code.

A:It was one of the predictions many people made.

Q: Can I plot from WS without an AutoCAD license?

Q: How will support be handled for LT Mac?

A: Apple app store is new to us. We will have a support Web site soon. There will be changes to the retail channel, and Apple will not support it. So more direct support.

Q: Does it work on a Macbook Air?

Q: Is there an upgrade over to LT Mac?

A: No. There is one price at the app store. Cannot enter an earlier serial nubmer. The app store is simple but not flexible. 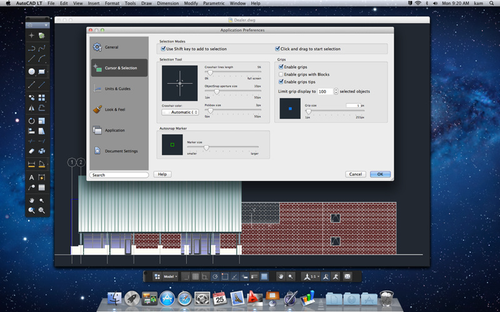 Q: How will upgrades of LT be handled?

A: Not sure yet. Ask your dealer. [But if you buy from App store, you have no dealer.]

Q: Can my Android login work for Mac WS version?

A: Yes. We added the ability to be logged into more than one WS session at a time.

A: This week we are adding command line to WS in the browser versions. Looking at adding it to the cell phone versions.

Q: Is there a trial version of LT Mac?

A: No. Workaround is to download the trial of AutoCAD Mac from Autodesk.

Hostess says getting lots of questions about Revit for Mac. "We are the AutoCAD team; get over to the Revit forums."

Q: Will ObjectARX XCode be updated for Lion?

A:  We do not compile on native Lion just yet; still on Snow Leopard.

A: Yes, and 1.1 million downloads fo the Android version.

Q: Can I upload DWG files to WS, and then open them with Mac?

A: Yes. DWG files are all the same.

Q: How do I upgrade from LT to full Mac version?

Q:  Any other comments?

A:  LT Mac is a learning experience for us; Apple has all kinds of rules surrounding the App Store. It is the fastest way to download the software.

Q: Will AutoCAD and WS ever merge?

A:  Will see more integration.

Q: Will subscriptions be available for LT Mac?

A:  No, since Apple App store does not support them. Might be available in the future, since iOS Store supports magazine subscriptions.

Q: Can I use the LT Mac license on all my Macs?

A: Yes, on up to five machines, according to App store rules.

Q:  When will LT Mac be available in Europe?

And that's all, folks!

Posted at 10:07 AM in Travelogues | Permalink

Are there still no plans to release LT for Mac outside the USA and Canada? Here in Europe we're really looking forward to running LT...