« Autodesk's ceo talks about the double-dip recession, and we listen in | Main | How does everyone gain market share in a mature market? »

In 2007, we laughed at SpaceClaim; well, laugh no longer as the company starts talking "displacements"

Justin Hendrickson joined company spokesman Blake Courter to talk with me about what's new in the mid-year release of SpaceClaim, numbered "2011+." Mr Hendrickson is a new project manager, and is in charge of who gets what in the product. He was due to give the demo, but then GoToMeeting spontaneously shut down repeatedly. We resorted to POTS [plain old telephone system].

Mr Courter didn't chortle, but he could have, as he recounted when the company launched in 2007 it effectively "re-invented" direct modeling -- even though the technology had been around for decades. "FUD [from competitors] is a tactic for the short term, but is not a strategy for the long term," he said, recounting how people [like me] didn't think the nascent startup stood a chance.

"People think of CAD startups as Jacob's Ladder, where they start at the low end and then work their way to the high end, like Catia. More 'recent' entries, like SolidWorks and Pro/E, can't; SolidWorks because of limitaitons in the dealer channel, Pro/E because of technology limitations." Throughout the talk, I noticed that one competitor was never mentioned: Autodesk.

"We are seeing success, because of accounts in the higher end lacking tools that we could provide." For the first time, SpaceClaim spokesmen are using the word "displacement." Previously, the company insisted its software merely complimented existing CAD systems; prior to today, much had been made of the claim that SpaceClaim helped conceptualize and prepare models in pre-CAD and post-CAD stages. With 2011+, it's repositioned as a 3D CAD system in its own right.

In this phone call, Mr Courter acknowledged that shop floors are now using SpaceClaim for design, such as of moulds. "Pro/E and SolidWorks are overkill for small tasks. With SpaceClaim, users don't have to worry about parent-child dependencies regenerating in the correct order." Or waiting for the regenerations to occur.

"It is fair to say that we are being more aggressive in this release as we see how our software is being used in the market." Indeed, new features in 2011+ are oriented towards detail design work, such as hole tables and the output of drawings and details.

When it comes to sheet metal design, Mr Courter scoffed that "most other CAD systems are only 80% of the way; they say 'We have enough sheet metal in here and our customers can go the rest of the way'." SpaceClaim wants to go all the way: "There is a need for a heck of lot more design with sheet metal, like double walls and hinge creation. If these were at the tip of your fingers, then you would use them, instead of creating them manually."

I found it interesting that SpaceClaim is aiming for 100% of the sheet metal designer's needs, because later Mr Courter showed me a chart in which customers self-reported their uses of SpaceClaim. Sheet metal design was near the bottom of the list, employed by a mere 18% of customers (who were allowed to choose more than one activity). Well, maybe that's the job for the new Mr Henderson. What they actually use SpaceClaim for: the top uses (40% or more) are concept modeling, model preparation for simulation, and CAD data translation.

SpaceCaim 2011+ (I keep wanting to write Space 2001) now handles JT with PMI. "Nearly every car maker has mandated using JT for data exchange. Siemens has does a great job of creating a rich format. We can claim to have to the best JT editor on the market: it's easy to use as a viewer, but can do what-if editing with parts and create new specifications."

Simulation, however, continues to be handled by partners, such as ANSYS. But one wonders when this wall also will fall. 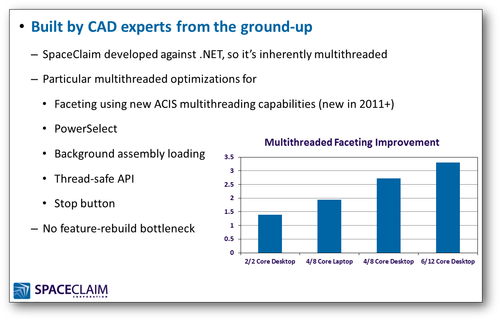 The software boasts improved performance through greater use of multi-threading. You can expect a 3.2x increase in faceting performance with a 6-core CPU.

Posted at 01:01 AM in Computer-aided Design: NEWS | Permalink

Ralph, the juxtaposition of an article about CAD companies claiming phantom \'market share\' and one about SpaceClaim\'s claim that it is \'displacing\' other CAD systems (aka \'gaining market share\') is funny. Not sure you intended it that ay, but funny nevertheless.

These guys have been drinking their koolaid for so long they are starting to actually believe their own stories. Sad, sad, utterly sad. It is going to be hard to find a larger bunch of more delusional people in this already spaced-out CAD industry than the SpaceClaimers. SpaceClaim\'s argument for its products is like a new car company braying its going to put GM out business because it came up with a better carburettor!

If SolidWorks is an overkill for the tasks you have listed in your article, what\'s next - go back to drafting tables and protractors?

In reply to the previous post, who ------ on your Corn Flakes this morning? I take no sides every software has its place and purpose. SpaceClaim is a beneficial tool in many ways and suits many applications. Why go over kill and purchase expensive hard to learn Systems when its not nessercsry, bad resorce allocation if you ask me? Systems such as CATIA, Solidworks are extremly powefull and great peices of software but put restrictions on the amount of people who can design in 3D but SpaceClaim expands the user base within 3D to less able people. I could rant on but will stop here.

"I found it interesting that SpaceClaim is aiming for 100% of the sheet metal designer's needs, because later Mr Courter showed me a chart in which customers self-reported their uses of SpaceClaim. Sheet metal design was near the bottom of the list, employed by a mere 18% of customers (who were allowed to choose more than one activity)."

TRUMPF has made a big commitment to SpaceClaim so this makes perfect sense to me. I think TRUMPF will use SpaceClaim as host CAD for the sheet metal CAM.

As a long time SolidWorks user, SpaceClaim saves me a ton of time working with dumb imported solids rather than using SoildWorks for this task. I also find it great for designing fixtures where I'm not exactly sure how I want to go about fixturing a part and know that I'm going to make frequent changes to the design.

SpaceClaim is the ideal CAM host and CAM companies should be using it for their CAD front end and making their CAM run inside of SpaceClaim. This actually makes far more sense than running inside of SolidWorks because most machining job shops work with non-native solids.

For over ten years Bob McNeel has refused to give Rhino users decent solid modeling and decent filleting because he refuses to license a quality solid modeling kernel. Many years ago Bob McNeel signed a bad contract for AG Lib that badly hurt Rhino development and set them back and he can't seem to get over this. I would strongly suggest to SpaceClaim that they put in the needed low level surfacing tools and convert Rhino users to SpaceClaim.

Until Spaceclaim gets their distribution in China fixed, I have no interest... I was quoted $11,450 USD for one seat!! Are you effing kidding me!! add the Pro/E translator and it came up $2,000 USD. When I inquired to Spaceclaim in the U.S. about this, I received no answer. I went ahead and evaluated the software anyway... no way is it going to "displace" Pro/E in our company. We do consumer product design and engineering and Spaceclaim is just not close to powerful enough. Not really clear on why they believe it is so worth the incredibly exhorbitant price. I can get two full seats of Creo for that price, and can do a hell of a lot more useful things with that than Spaceclaim. (at this point, I consider it Spacelame... especially lacking response to my pricing inquiries back in the states. Shameful.)

Just my 2 cents, your results may vary...

I am sorry to hear that you had that experience. We have no record of such a quote, but that number appears to be in a different orbit from our actual pricing.

We do have a new distributor in China, and I would be happy to put you in touch. The best way to reach me is blake (at) spaceclaim (dot) com if there’s anything else I can do.

Congratulations to the team on their release of SpaceClaim 2011+.

With respect to their observations about Pro/E, I guess the team was busy on their release and didn’t catch what happened and is happening with the PTC Creo vision, strategy, and first release.

The Creo apps also provide an unprecedented level of interoperability – data moves seamlessly between apps and modeling modes while retaining design intent – such that companies can share data more easily with internal and external parties.
We believe this is the right approach and from what we see from our Creo sales growth and adoption since introducing of our vision, so do our customers. As we’ve reported during this year, we’re seeing amazing growth in our design software business, and sales of our software supporting direct modeling is outpacing all expectations. One of the reasons is that we provide three approaches to offering direct modeling approaches to our customers, that align with their needs:

Expert users of Creo Parametric want to stay in that same environment and edit their model in ways similar to direct modeling. That’s why there’s an extension for Creo Parametric, called Creo Flexible Modeling Extension (FMX).

Casual or inexperienced user might want a much simpler app and approach, and they can use Creo Direct to drive a change to a model. But they want to move that between apps seamlessly.

The great news is that these products provide smooth interoperability – data moves seamlessly between apps and modeling modes.

From what I hear from around the globe and see through our exceptional growth in Creo business, it appears that when customers are looking to add direct modeling to their environment, they are finding the solution with PTC, rather than others.