When IMSI/Design first told me about their DWG viewer for iOS, they promised to make "an announcement of significance every month" for the next several months.

The first one was about TurboViewer, and that it displays actual vector DWG files in 2D and 3D on iPads. In contrast, Autodesk's AutoCAD WS displays 2D only, and then only a rasterized version. (You can see the blur briefly when you zoom in.)

The second was releasing the same software officially on iPhone and iPod Touch. The software is free from Apple's iTunes store.

The third is coming this week, with the release of the Pro version. Not free, but $9.99 introductory. 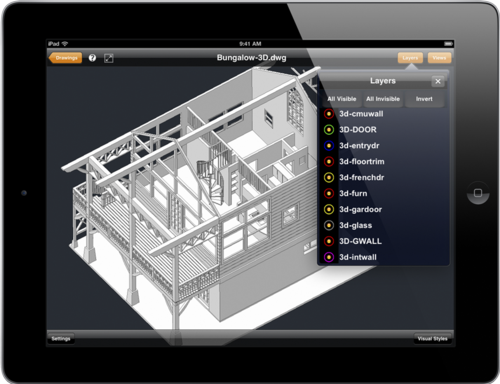 For the price, you get the following extra features:

On iPad, iPhone, and iTouch. So that's this month's monthly announcement. IMSI/Design gave me a sneak peak at next month's release, which'll add --.