Autodesk chose Maker Faire -- the annual gathering of inventor, hobbyists and craftspeople -- for the public debut of 123D, its consumer design software. I didn’t know what to expect at Maker faire. Maybe Autodesk did not know either. The consumer market is fairly new territory for both of us.

Google SketchUp's booth at Maker Faire, drawn in SketchUp, a favorite among DIYers.

But not so new for Google, who was there in a big way with SketchUp: a trailer, a stage and several exhibits, and big crowds. It turns out that SketchUp has achieved a widespread acceptance among the attendees of Maker Faire – and judging from that, probably with the entire community of "makers," as craftsmen, hobbyists, tinkerers and inventors are now being called.

CAD insiders know SketchUp well for its application to architecture; its ease of use has helped make it the most popular conceptual sketching tool in the world. For massing studies, I hear it has no equal. Like 123D, the basic version is free. 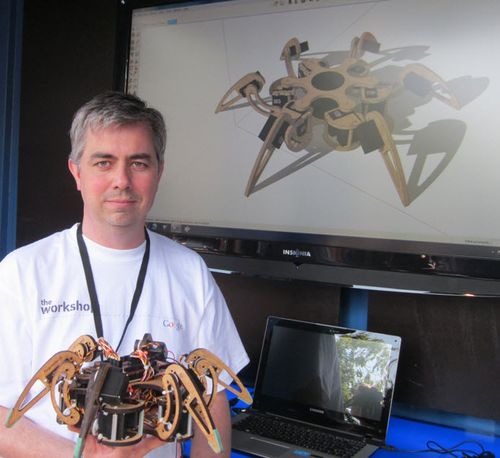 Mechanical modeling?
Yeah, we do that. John Bacus, product manager of SketchUp.

I find John Bacus, product manager of SketchUp, to hear him explain the software's accidental success with the maker audience. He is showing showing Skpr*, a spidery looking remote controlled robot, to a bunch of kids. On the big screen is a 3D model of Skpr. But seeing is not believing.

“Is it even made with SketchUp?” I ask John, incredulously. I suspected the model may have been imported. “SketchUp is not really a serious mechanical modeling tool, right? I mean, It’s not really a solid modeler. It’s not even precise, like CAD software.”

“Yes, it was made in SketchUp,” he says, sounding as if I was not the first unenlightened person he had encountered. “It is manifold geometry, not solids. But it has all the commands like add, subtract [AKA Boolean operations]. Besides, does it matter what’s under the hood, as long as it can model what you want?”

“It’s every bit as precise as other CAD products.” John counters.

“Can it output to standard formats?”

“But they’ve got 4,000 free models,” I counter, admitting to my being easily impressed by the amount of content Autodesk was giving away for free with 123D.

Darn. Sounds like something I should have known about. Is it possible that there is a vast repository of free 3D models? Was a parallel but invisible CAD universe  created without my notice? I excuse myself, and scurry over to take a look 3D warehouse.

I’m not surprised to find many, many buildings in 3D Warehouse at sketchup.google.com/3dwarehouse. After all, that was SketchUp’s reason for acquisition by Google. Google bought SketchUp back in 2006 to populate Google Earth with models of the built world. Therefore, there are also civil projects -- more than a few. A search for Golden Gate Bridge finds 228 models.

OK, it is the most famous bridge in the word and I shouldn’t be surprised to find so many people honing their modeling skills on it. Let’s try something rarer. Didn’t Autodesk include with 123D the model of a dolphin? A search for “dolphin” in 3D Warehouse yields 181 results. Granted, one is the Swan and Dolphin Hotel in Orlando FL, but even after you discount such irrelevancies, that’s still a whole lot of Flippers.

And speaking of chairs... John was modest. A search for chairs comes up with 14,317 entries. There are 34 models of Adirondacks alone!

Who knew? Hundreds of models of piston.
Google’s 3D Warehouse provides an incredible number of mechanical parts.
Autodesk’s 123D will have to play catch-up.

But let’s get back to mechanical design. I look up "engine" and get 894 results. Some are in complete cars. Let’s drill down: "pistons." There’s too many to count. "Speed reducers." Only five? What a letdown!

Clearly, Autodesk has quite a bit of catching up to do. SketchUp users have been busy for years adding mucho models -- tens of thousands of models -- all of them freely downloadable. Combined with Google’s unmatched ability to search, models are incredibly easy to find.

The comparison between SketchUp and 123D may be a bit more complex than I thought. These products will need to be put to the test.

*) Get it? The SKP in "Skpr" is the Sketchup file extension.

Posted at 09:22 AM in Roopinder Tara | Permalink

Yeah, but when I search Google's warehouse for DB25, I only get 2 results: 1 DB25F wiremount, 1 DB25M wiremount. I need DB25F right angle through hole with the correct profile (not all DB25 PCB connectors have the same footprint).

So until SketchUp gets free STEP and IGES import, I think software such as 123D is a better match for building (oops, making) electrical stuff.

I'd argue Autodesk and the rest have zero chance against SketchUp for the hobby market and some of the pro market. Why? SketchUp is very easy to use, is free, has a very active plug in community (everything from rendering to costing), and of course 3D Warehouse. But the biggest reason is Google and all the leverage that brings.

To be honest it doesn't surprise me that industry pundits have next to no knowledge on SketchUp. I don't think Google funds too many press trips, and there is an overriding snobbery in the MCAD (and to be frank in some of the AEC) community towards the product.

But those of use who do use it love it.