One of the less heralded new features of AutoCAD 2012 is the redesigned End User License Agreement (EULA). The EULA generally evolves (or devolves, as the case may be) from release to release, but AutoCAD 2012 sports a completely redrafted EULA.

Not only is the EULA new, it's bigger. A lot bigger: 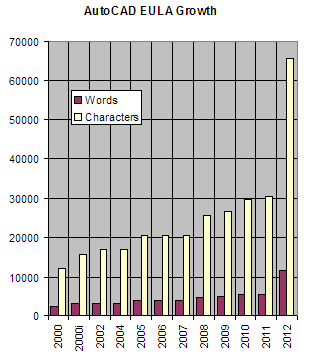 If the EULA continues to double with each release, and releases continue to ship every year, then the EULA for AutoCAD 2020 will contain more words than a dozen copies of War and Peace!

Despite its heft, this EULA has clearly been rewritten to a higher standard of quality than previous versions. I've made fun of poorly drafted EULA wording in the past, and while this one is no work of art, it does have some redeeming qualities.

Unfortunately, all this moving around and renumering of sections makes it more difficult to compare the new EULA to the previous one, but by and large the legal aspects of the agreement remain the same, just with more prose and coverage for new license types and new usage scenarios.

It's interesting to note the addition of the "Fixed Term/Limited Duration/Rental License" and "Session Specific Network License", and the increased attention paid to the effects of a maintenance subscription on the license agreement.

The new EULA contains numerous changes in language that in some cases are intended to make the language legally more watertight, in some cases to clarify a term, and in other cases intended to broaden the scope to make it more versatile -- probably in an effort to unify the EULA terms among disparate products.

[Owen Wengerd writes on programming issues at his blog, Outside the Box. He is president of ManuSoft and vp Americas of CADLock, Inc. ]

There is only one thing users need to know Owen; it the EULA negotiable?

Lawyer words aren't cheap. Isn't it nice to see Autodesk has been putting our Subscription cash to such good use? I can feel this EULA boosting my productivity to whole new levels.

I MUST SAY I'M GLAD THAT THE SHOUTING HAS BEEN TONED DOWN. SOMEBODY MUST HAVE SHOWN AUTODESK'S LAWYERS HOW THE CAPS LOCK KEY WORKS.

Did you check to see if they slipped the complete works of Shakespeare somewhere in the middle to crank up the billable hours? If they did, how many people would notice? You, Paul and ...?

The whole secret police mentality of legalese perpitrated agianst & upon their own customers makes it near impossible not to have a revolting reaction to the ELUA. The bankruptcy clause gives an all new meaning to vaporware - the license just dissapears!

so, we can presume that Autodesk turned a tidy profit selling GM all new licenses after they declared bankrupcy?

In the one-sidedness that is EULAs, Autodesk can break the license terms any way it wants. GM goes bankrupt? No problem. SMB goes bankrupt? Big problem.

I have just finished going through the AutoCAD 2012 EULA and will say lot more elsewhere.

Ralph, you are only correct about the one sided nature of the EULA only if you think the EULA is a contract and legally enforceable. It is not!

Equally no need to feel revolted by the insolvency clause Kevin. Despite, for an individual, its Sherlock like, kicking you when your down by taking away the tools of your trade approach Autodesk is demonstrating with this stipulation.

What do you mean by the EULA not being legally enforceable? I thought that was the whole point of it.

EULA is not legally enforceable under certain circumstances, such as (a) it violates the law of the land, or (b) a court rules the EULA unenforceable.