The problem of LED bulbs from China via eBay

With the the prices of LED lightbulbs unreasonably high locally, I wondered if cheaper alternatives might be available through eBay.

Sure enough: 8W bulbs that cost $20 locally can be had for just $3 on eBay, shipped from China. I ordered two, and after two weeks they arrived. Each bulb featured 149 LEDs! 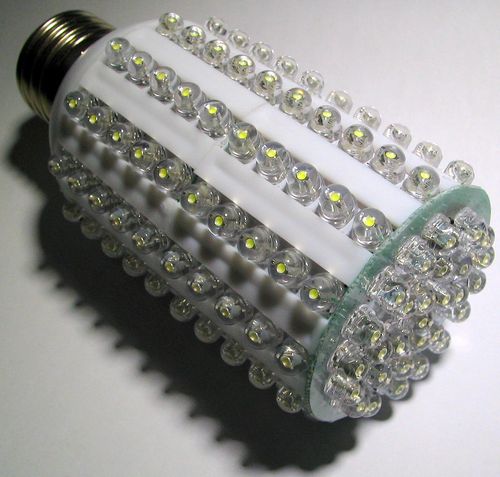 I plugged one in to ascertain its brightness and cone of illumination. (Many LED bulbs for sale locally are designed for spot lighting, meaning the light does not spread out over a wide angle, and so are unsuitable for general use.) I was immediately disappointed.

The LEDS at the flat end lit dimly; those around the circumference, not at all. After some further testing, I took apart the bulb. (It was made of plastic and held together with six machine screws.) Immediately I saw the problems: hand soldering and serial wiring. 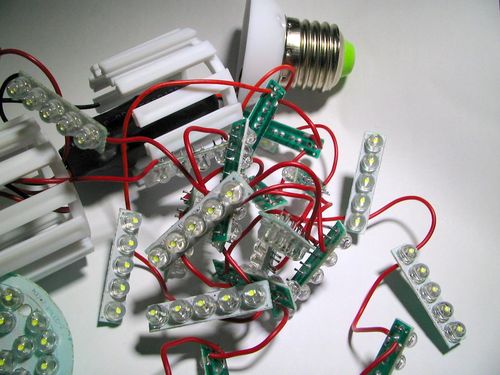 Every one of roughly 300 connections was hand soldered. This is a problem, because soldering by hand can lead to missed connections, and to cold solder joints -- as I know from my teenage years of hand-soldering electrical components. I felt sorry for the poor Chinese laborers who had to tediously hand solder all these bulbs.

Serial wiring is a problem, because just one bad connection means that all connected lights no longer work-- just like with an old set of Christmas lights that uses serial connections: one bulb goes, the whole string goes.  The advantage to serial is that less wires are needed, bringing down the cost. The better parallel type of connection ensures the string stays lit, even when one bulb burns out -- but uses 3x more wires.

Then, suddenly, I was relieved that the LED bulbs did not work, for I realized that they were not CSA or UL approved. Had they caused a fire in my home, my insurance might not cover the cost of the damage.

I provided the eBay seller with negative feedback, and warned others to not purchase these LED bulbs. Quickly, he responded, saying he would refund my entire purchase price (no need to ship the bulbs back to him). All I needed to do was to remove the negative feedback.

I refused, telling him I wanted warn against procuring the problematic product. His next response: the bulbs were meant for 220V systems, not the 110V I use here. I ignored him. A week later, eBay contacted me for more information on this case, which I provided them.

Posted at 06:55 PM in Impractical | Permalink

Good work Ralph. You did an in-depth study.