Miguel Helft of The New York Times is reporting this evening what was pretty much an open secret. It was just the timing we weren't sure about.

Tuesday Autodesk has all kinds of media events planned for announcing AutoCAD's return to the Macintosh, this time on the OS X operating system. 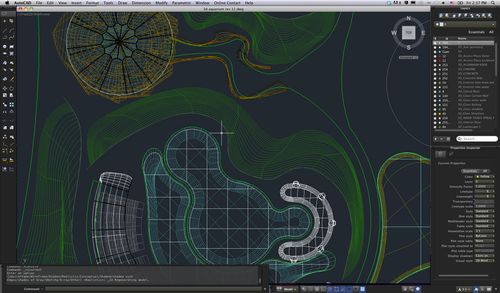 This is an endorsement from our side that design and engineering customers are taking the Macintosh seriously again.

Heh. Try telling that to companies like Nemetschek Vectorworks, Graphisoft, and Siemens PLM Systems, whose CAD software has been running on the Mac for years, in some cases originally developed on the Mac back when Autodesk gave up on it.

The New York Times says the OS X version will cost as much as the Windows version, $3,995 (subscription is $450/year). Shipping date for North America and Europe is October, my guess being closer to the end than the beginning of the month. www.autodesk.com/autocadformac

AutoCAD for Mac will be free to students and educators through the Autodesk Education Community site.

Mr. Hanspal said AutoDesk was considering making mobile versions of the design software for other tablets on the market.

The version for mobile devices was built with the help of Visual Tao, an Israeli firm that Autodesk bought in December.

Love it when non-CAD writers get confused. AppleInsider writes:

13 releases have followed since [Acad was last available on the Mac], including the current Windows-only Release 25, which was released in March

User experience design patterns, such as the visual approach to drawing and layout management, have also been incorporated into AutoCAD for Mac.

Our "What's Inside? AutoCAD for Macintosh" ebook will ship once we get the go-ahead.

Just checked The Drudge Report... no coverage yet. But it's on Tech-meme.

NYT Scoops Us All

In a sign of the times, it is significant that The New York Times broke the story first, instead of industry writers and bloggers. I suspect Autodesk wants corporate America to know about the OS X version, more so than its own user base. After all, Windows AutoCAD users are not customers for the Mac version.

(Images of the beta version leaked earlier this year by an Italian Mac blogger were accurate, after all.)

CAD journalists and bloggers were under a verbal embargo to learn about "the announcement" Tuesday morning -- for public release Tuesday afternoon.

John Walker writes about the original port of AutoCAD to the Macintosh II in 1987: www.fourmilab.ch/autofile/www/subsectionstar2_68_0_2.html

I wasn't under any embargo, verbal or otherwise. I was simply not informed about the product in any way, at any time. The irony is that this made me totally free to discuss it in any way I saw fit.

I allways have this little idea that most companies that announce MAC HAS ARRIVED with trumpets blaring have run out of meaningfull things to do. When an appeal to maybe 5% of the potential user base becomes a highlight of the release cycle you know the long term problems for day to day users are in all likelyhood not be addressed.

Or Google, as many (most?) will be aware (SketchUp and Google Earth).

When an appeal to maybe 5% of the potential user base becomes a highlight of the release cycle you know the long term problems for day to day users are in all likelyhood not be addressed.

Y'know, I'm getting sick of lazy references to "5%". Are Mom and Pop interested in CAD? Are office cubicle drones? Every survey seems to indicate that at least half of those attending third-level use or plan to use Macs - including the CAD users of the future.

Clearly Autodesk and others can see the writing on the wall - maybe it's time for CAD bloggers to catch up?

After all, Windows AutoCAD users are not customers for the Mac version.

I wouldn't be so sure of that. The younger CAD users (and I'm in that demographic myself) that I support are excited by this news and we use MicroStation on Windows XP, so presumably have less interest even than most.

From your post - "After all, Windows AutoCAD users are not customers for the Mac version."

I've been a Windows ACAD user since R11, and I'm more than ready to switch platforms - My experience with Win7 Pro has been horrendous, and I've used a Mac for all my other essential functions for more than 5 years. ADESK, please provide a crossgrade option of some sort!