For Linux and Windows users, the QWERTY part of the MacBook is the same; your fingers, however, need to think different around the edges. Some keys have different meanings or are outright missing.

Here's what the MacBook keyboard looks like. Take particular notice of the quartet of keys in the lower left corner (fn, control, options, and command.)

Command is the Macintosh equivalent to Control (Ctrl) in Windows. To save a file in ARES (and any other Mac software), you press Command+S -- instead of Ctrl+S.

Another change is that the Command key is located next to the spacebar, instead of at the end of the keyboard. Your fingers will have to re-memorize the location -- at least until you switch back to a standard keyboard.

Options is the Mac equivalent of the Windows Alt key.

Control is a third "alternate" key; it gets used in conjunction with shortcut keystrokes, such as the infamous five-finger Command+Control+Shift+4+Spacebar sequence needed to capture a dialog box to the Clipboard.

fn is used to access alternate actions on the function keys, just as in Windows. (Except that this key is located where our fingers expect Ctrl.) And functions keys are the same as in Windows. For instance, press F5 to switch between isometric planes in ARES.

Elsewhere on the keyboard...

Symbols are used extensively in documentation and pulldown menus of software written for the Mac. You can expect to see the following hieroglyphics, and be expected to know their meaning (from the Edit menu in ARES): 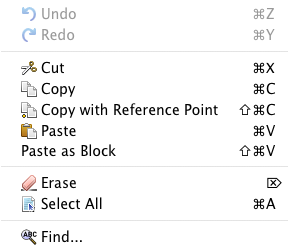 Other standard keys are just missing, such as PageUp and Home. There are apparently shortcuts, but that's just more different stuff to remember.

There are a few solutions to the problems created by Apple's redesign of the computer keyboard:

While I understand the confusion for anyone moving to mac from PC, isn't the point of having ARES (or other software) available on mac to minimize OS switching? Indeed, any mac user will know everything you wrote above, and virtually none of it is specific to ARES. There's really no need for you to write a Mac handbook as it's already been done without the snarky tone. Those Mac users interested in your blog would undoubtedly appreciate information that's actually focused on CAD, not OS belittling.

I second that. Who ever contracted you write about CAD apps on the mac is defiantly not getting their moneys worth. I haven't seen anything remotely close to cad worthy. Just a bunch of bitching and moaning about the hardware and OS.

Don't attach a standard PC keyboard. OSX will prompt you every so often to tell it which key is which when it forgets. An Apple wired or wireless keyboard adds most of the keys you are looking for.

I kinda sympathize with you on the somewhat frustrating transition. When the Intel Macs came out, I got a Mini and went through a lot of the same issues with OSX. I still get a bit frustrated with some of my keyboard shortcuts not working in OSX the way I am used to (home, end, and ctrl+arrow when navigating text, for example).

Some things that can help:

- Enable multi-touch for the trackpad. That gets your right-clicks back, but be careful about stray fingers on the pad.

- If you use an external mouse, the cursor acceleration curve feels very strange as compared to the way Windows and Linux do it. Download and install Microsoft Intelipoint to fix that. It allows you to replace the OSX curves with ones that feel more normal. That makes it feel a lot less alien.

- Mac screen gamma is a bit dimmer than the typical Windows setup. Fiddle with the color settings to bring some contrast back.

- Most text on OSX looks bigger (as a percentage of screen size) on OSX than on Windows. I don't know why this is. If you find a fix for it, let me know.

- You can scale the desktop icons down by right-clicking on the desktop and selecting 'Show View Options'. That's the only place to do that.

- A really cool OSX feature is Spaces. It allows you to have apps running on different desktops, so you can keep things a bit less cluttered. Which is good since alt-tab switches between applications, not windows. Which is frustrating as hell until you get the hang of Spaces and Expose.

CAD vendors are moving to offer stuff on OSX because porting is a lot easier than it used to be becasue of the shared architecture. The carefully optimized low-level stuff doesn't have to be re-written from scratch like it did when Macs were using the PowerPC architecture.

i) I can count on one hand the number of old-timers and power users I'd know who would actually use the Home etc. keys. Apple clearly aren't interested in squeezing in miniscule keys (like PC manufacturers would) just for this tiny percentage.

When it comes to the look of fonts on the Mac, my understanding is that OS X displays fonts fatter than Windows -- to more closely replicate the look on the printed page.

I initially implemented Spaces, since I am used to it from Linux, but then turned it off after getting a second monitor. It was strange seeing pairs of applications (one on each screen) swooshing back and forth. I'd rather that Spaces was specific to each monitor.

A replacement for Windows' Alt+Tab is F9, which displays all open windows (apps and docs) on each monitor. I find this particularly useful when I minimize a drawing window in ARES, and it disappears from view.

Ralph, you have to try the dashboard with gestures. You don't even have to use keys to switch windows, or show the desktop. It uses gestures based on what corner you move your mouse too.

Most text on OSX looks bigger (as a percentage of screen size) on OSX than on Windows. I don't know why this is.

Ralph is right - because of the origin of the Mac as the start of DTP, the fonts (and screen gamma before Snow Leopard) were set to defaults more useful for an end destination in the printed word.

Oops, I mean make that Exposé, not dashboard. There is nothing like it built into Windows (and I wish there was).

The tone is certainly unwanted, as others have stated. And one of the huge points you missed while berating the lack of keys and the requirement of key combinations is the keyboard your looking at is primarily for a laptop. So, if you would rather have a bulkier or less capable computer for some extra unneeded keys, which after just a little while are quite natural to use, then thats your choice.