Bricsys of Belgium, Graebert of Germany, and a third, unnamed CAD vendor (of another country) were in a multi-year race to see who would ship the Mac version of their AutoCAD-compatible software first. Today, Graebert won.

ARES for Macintosh is available for download from here. 30-day demo is free, naturally. Price is US$995 in North America and e995 in Europe; half-price until 1 October.

I have been beta testing ARES for Mac, and found that it is identical to the Windows versions, except in these areas:

- Installation is Mac-style (drag the DMG file to the Apps folder.)

- Plot dialog box is quite different.

- Windows-specific commands missing, such as those related to OLE.

- Windows-specific APIs missing, such as ActiveX and VSTA.

Here is a screen grab of the Mac beta. (The new Tool Matrix palette is also new to the Windows version.) 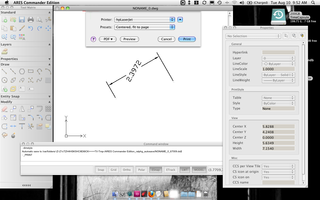 As Deelip Menezes noted on his blog, we can now expect the Mac version of DraftSight soon. (Dassault Systemes rebranded ARES as DraftSight.) I expect to see Linux versions for both CAD packages later this year.

What does 'AutoCAD compatible' mean in this context, Ralph?

But I thought the Windows version of ARES didn't have the ribbon UI ?

That "disjointed" UI is annoying. It's been like that in GIMP (the open source image manipulation program for Linux/Unix and Windows) and I can't wait for the upcoming 2.8 version which will finally offer an integrated interface.

You are right: there is no ribbon in the Windows version of ARES. I guess I meant it along the lines of, "The ribbon is impossible on Mac.:

Yes, ARES has the GIMP interface. I have argued with Graebert over this. They might add a switch to toggle interface modes, like InDesign has.

So what does this really mean? As far as I know, the majority of the Autocad APIs are either ActiveX or .NET. The only exceptions I'm aware of are the scripting stuff, such as DIESEL and Lisp (excluding all the VLisp vlax- commands, which are ActiveX). But if all it supports is DIESEL and basic Lisp, that would be more like "It supports a very small subset of the AutoCAD APIs..."

You didn't mention the 4th vendor: Autodesk. Unless they're the 3rd one.

Some us consider this an advantage? ;) I see that Graebert are copying Bentley's 'Tasks' interface - I know that a lot of people hate that, too. The best interface for Mac would ideally follow the last couple of generations of Apple's own 'Pro' apps, or even follow Adobe's lead with Creative Suite.

Re: the 'disjointed interface'

Some may recall this as the 'Photoshop interface' (hence GIMP copying it). Of course, Photoshop had it because it originated on the Mac. Personally, for some things (like photo or video editing) I find it's much better than the all-in-one window, YMMV.