« The nVidia plan: To shatter coffee breaks due to ray tracing | Main | foto of the sunday: the rather red corner store »

The precision of computer modeling is rather divergent

As a transportation engineer in the 1980s, I used mainframe computers to model traffic volume predictions, and was embarrassed at the poor outcome. Predicted traffic jams failed to materialize, because human behavior cannot be modeled well. We learn to route around problems with our cars.

Some 30 years later, computer modeling continues to be used today for unpredictable events, such as the paths for hurricanes. I was struck by the divergent results of 15 computer models predicting paths for Hurricane Bonnie over the next five days. 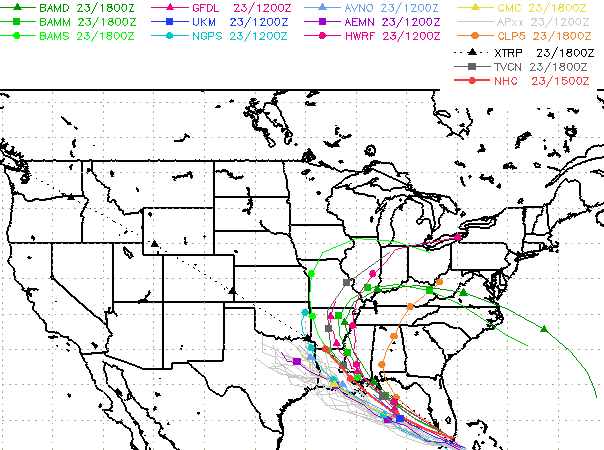 One path shows the hurricane (or its aftermath) ending up in Toronto, while another just as badly predicts Victoria, Canada. And to think there are those who trust the outcome from computer modeling of climate change predicted for 50 years from now.

The "computer" model that has Tropical Storm Bonnie moving into Victoria, Canada is the extrapolation model, listed as XTRP, with the black triangle line is the projected path of the storm if and only if nothing changes about the for the prediction period.

Is very hard to predict details in chaotic systems with computer models, but they are much better in predicting the "large picture". So i would not invest in properties near the ocean where the models are predicting a rise of the sea level :-)...

This is a case of knowing what we don't know. We don't know how to do atmospheric modeling well over a period of several days. On the other hand, note that the early parts of the simulation all pretty much indicate the same track. Also note that a lot of the divergence starts when the storm hits land and the entire "engine" behind the storm changes. This is really not all that surprising.

Excellent point about the lack of precision in atmospheric modeling. I've worked with engineers trying to match test results with fluid flow analytical models for limited well-defined applications such as modeling flow out of nozzles on a vessel, with simulation models commonly missing the mark by 300% or more even though fluid properties are well established. Even in narrowly defined flow simulation models, there are often huge errors.

Given this reality, there is no way in hell anyone can take something as large as the earth's atmosphere with so many countless unknowns and variables, and then "conclude" with any degree of certainty the isolated cause and effects of a specific component such as CO2. Most of the "scientists" making these wild assertions are not engineers, they have degrees in math or statistics or biology, many/most working for government, and virtually all of them are far out of their depth regarding complexities involved in any such atmospheric modeling. Any scientist claiming he "knows" how CO2 itself is affecting earth temperatures is a charlatan perpetrating fraud.