« Rolling in dough: ANSYS revenues up 6% on the year | Main | Most frequent words uttered during ADSK conference call »

We got off at the Science World Skytrain (overhead rail transit) station to see Russia Dom (house), but the lineups snaked for too long for us to wait. Despite its popularity (and its purpose in promoting the location of the next Winter olympics, Sochi 2014), Russia House is open a mere five hours a day -- as we found out when we came back in the evening for a third try. 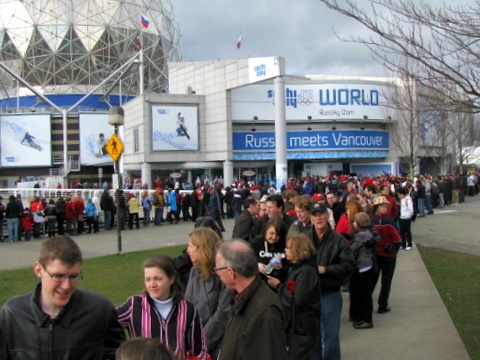 Adjacent to Russia House is the athlete's "village," and here is the British portion. Following the olympics, these brand-new condominiums will be sold to the public, or, more accurately, to upper crust and over-extended mortgage types who can afford the outrageous price tags. 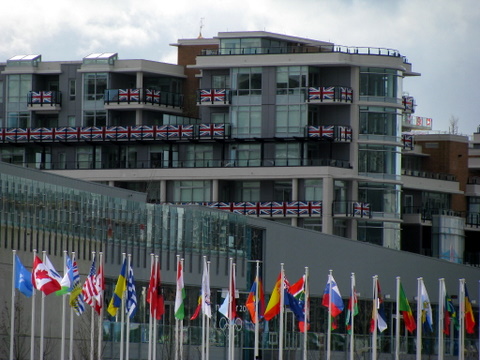 Once past the athlete's village, we took the free streetcar demonstration run to Granville Island. By providing free trips, Bombardier hopes to convince the City of Vancouver to bring back streetcars. Not likely on this city's hyper-crowded streets.

Granville Island isn't really an island, and it sits in False Creek, which isn't a creek (it's a tidal inlet of the Pacific Ocean). On the island, we headed over to Switzerland House, but were disappointed that it consisted of being just a Swiss restaurant. We did enter the contest for a "free" trip to Switzerland, which inexplicably departs from Montreal, some 3,694 km away from us. 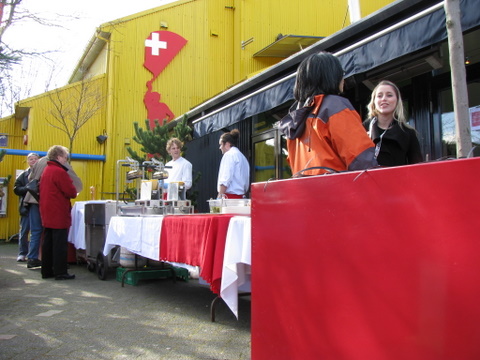 We took in a bizarre video artistic event (2.4 minutes of a spinning camera recording a mirror breaking as computer animation) and the nearly deserted Francophone House (French-speaking Canadians). No line-ups!

The tiny False Creek ferry took us across the water to Yaletown. Mixing dark clouds with sunshine gave us a spectacular view of downtown Vancouver's highrises and the parked uber-expensive yachts -- and a feeling we were in Dubai. Sucks to own a medium-size yacht around this part of town. Nestled inbetween is the pillowy air-supported dome of BC Place Stadium, the location for the opening, daily medal, and closing ceremonies. 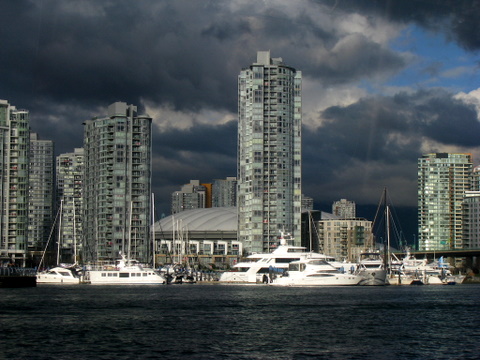 Giant black rubber bladders and black RCMP speedboats protect the end of Flase Creek (and the athlete's village, Russia House, and other pavilions) from terrorist attack. 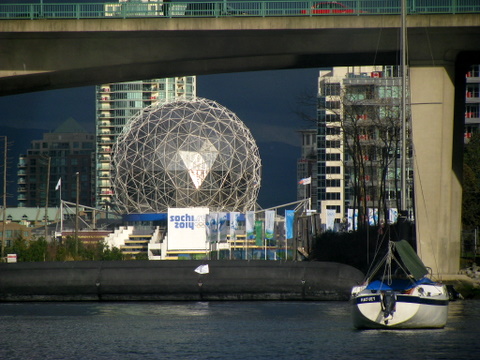 Yaletown is a former warehouse district that's now become a pedestrian mall with trendy shops, brewery-restaurants, and concerts. Yahoo hosted a major hang-out place with free access to Apple iMacs, photos of simulated winter sports, and giant tvs for watching the Canadian women's hockey team blank out the Americans. After all, it's all about YOU. 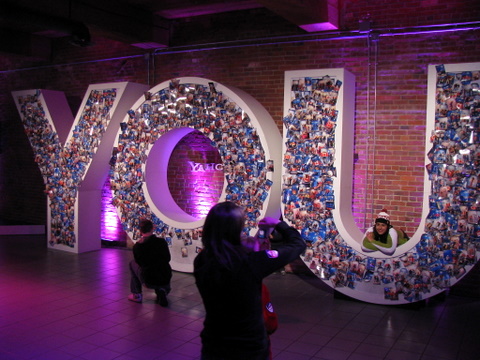 All around the town, the Salvation Army offers free hot chocolate drinks to ward off the cold -- whipped cream topping optional.

We took in Italy House in the Roundhouse (the former CPR locomotive roundhouse, now cultural center) which featured a mini-museum/tradeshow of Italian design. Even though its shop offered 40% off Italian teamware, we still couldn't afford the Freddy-designed $500 parkas or $120 sweaters. We did get free neck straps promoting Italian cheese: "Never buy cheese sold in a plastic bag!" we were admonished. 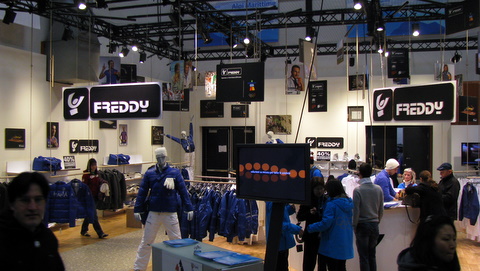 This was the last place we entered, for the lineups were just too long everywhere else for these free events -- lineups so long that street vendors have taken to advertising their wares by calling out, "No lineups!"

We moved north with the crowds towards Granville Street. For decades, this used to be the entertainment center for Vancouver (and one of my favorite places as a university student), but then in later years it unhappily became just plain seedy. In recent years, the city has worked to revitalize it, and for the olympics it was closed off for street performers and pin traders. 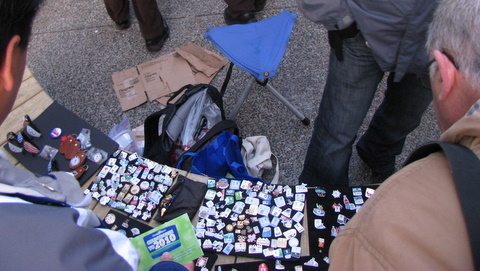 Another closed off street is Robson, which used to be known as Robsonstrasse for its many German restaurants and European shops. Now money has taken over, and it is the most expensive shopping street in Vancouver -- a kind of Rodeo Drive North. This street too is closed off during the olympics. 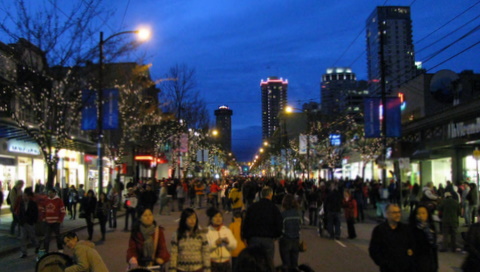 The official Canadian olympic broadcaster is CTV, and their studio is located smack dab in the middle of Robson street. They did an excellent job broadcasting the sporting events live, as well as streaming all events live at ctvolympics.ca (Canadian IP addresses only). 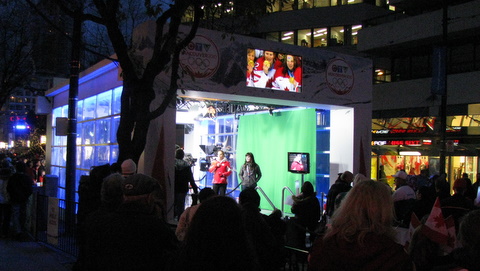 We ended the day with a muffin in my wife's favorite coffee shop, Caffe Artigiano, across from the Vancouver Art Museum... ...and then got home just in time to watch Joannie Rochette win olympic bronze in figure skating, the first Canadian win for women's singles since the last time the olympics were in Canada, 1988.

Posted at 09:01 AM in Travelogues | Permalink