Alright, so here we are at AU 09, first time at the Mandalay Bay, which confuses guests by (1) having two hotels, one named Mandalay Bay Hotel, the other THE hotel at Mandalay Bay; and (2) hiding the elevators in a manner similar to that of the Swan & Dolphin hotel in FL. Fortunately, Josh Mingus happened upon me at guided me to the right elevator bank. 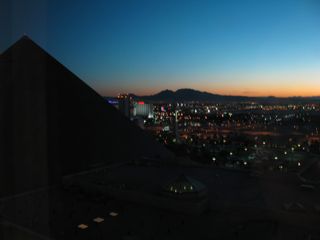 View from my hotel room window this morning at 6:16am.

I am having muffin and tea for breakfast, all alone in the Press Room. Feels weird, since the press room is usually a hubbub of activity as editors from around the world (usually) greet each other and catch up on stuff.

Just met up with Michael Robinson of www.Cadopolis.com. This is a typical Internet success story, one that I have experienced a few times. He runs a site that sells AutoCAD-related stuff. Several years ago, he invited me to host my line of ebooks with him, and now each month a cheque arrives for me in the mail.

But it wasn't until this morning that we met in person for the first time. He reports that sales to the US remain depressed, but that Europe and Australia are strong. I'm finding the same: until two years ago, nearly all my sales were to the US, but now I have clients in Europe and Asia making up for what otherwise would be a downturn.

We are being guided from stand to stand in the MFG Lounge. Currently being told how poorly customers generate technical docs, and so the new Inventor Publisher is needed! 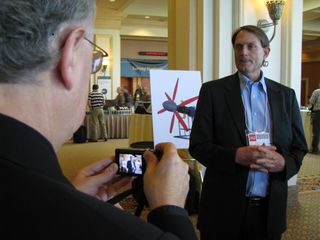 CEO of Statasys in front of 2D printout of turboprop. 3D model will be on display later.

Just before this, we were shown the first ever 3D printout of a turbine engine.

Stratasys and Imagint Technologies (resller of Autodesk software) worked together, 200 hours of design time over a span of two years, in the spare time of Nino Caldarola of Imaginit. An imaginary engine, where the back end is like old turbines, with the prop and other parts from the modern era. For instance, countertoating blades, three spin forward, three in reverse. Modeled in Inventor.

As good as Inventor is, a real model gives a better idea of its size. Autodesk connected him with Statasys, who generated the 3D model.  CEO Scott Crump of Stratasys notes his company has shipped half of all 3D printers. About 12 feet in diameter and ten feet long. Each prop was built individually, plus 300 other parts, including gear chains. Largest 3D printers can generate parts 4 feet on the diagonal. How much cost to output: $150,000 to build, not inlcuding design time. Plastic pieces are bolted together using normal fasteners.

This is the 17th annual Autodesk University, which was begun by Miller Freeman (owners of Cadence magazine at the time) in San Francisco. 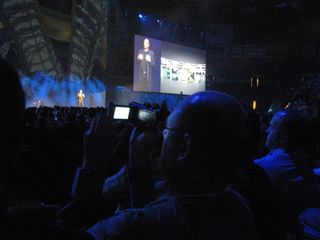 Carl Bass addresses the crowd in an arena-like complex.

The keynote address by Autodesk ceo Carl Bass emphasized surviving the recssion by being innovative -- using Autodesk software, 'match. Like architects telling customers how much energy ($$$) they can save by using Autodesk energy analysis software. Mr Bass warns this analysis may become law if legislation passes in the USA.

He listed the five stages that technology goes through: Impossible, impractical. sweet spot, expected, required. The best example is that of flying in airplanes, at one time thought impossible but now required for long distance travel.

Showed three icons in Inventor that in real time show the manufacturability, cost, and environmental impact of the part being design.

Web-based computing will allow designers to analysis hundreds of options in the time it would take a desktop computer to analys one. He did not, howver, provide any details on how this will work with Inventor. Autodesk currently has Twitch, Kenneth Wong reminds me, but currently it has some limitations, because you need high bandwidth, such as a 5 megabit pipeline to make it work. (As a comparison, my office Internet conneciton is 0.25 megabit.)

He describes using Sketchbook Mobile together with the iPhone's camera to markup onsite images.

Finally, he describes an unannounced "Share Design" addon software for realtime markup and co-editing of shared drawings. Facebook shows that it is posslbe to be selectively aware of other people's activities. A new Clash Detection addon alerts those group members who need to know about design clashes. It was not clear to me if theses add-ons are for Inventor only.

He is answering lots of questions from the assembled media (about 50). He says to expect more analysis software from Autodesk. He is also interested in Web-based software like Project Cooper, DragonFly, co-editing, and so on

Twitch is co-developed with OnLive. It is like "a very long video cable." It delivers the graphical image of AutoCAD over the Internet as it reads back keyboard strokes and mouse clicks from the user. "This is a hedge against the future."

He says we are beyond "let's not do Web-based software." The desktop may dwindle to zero, considering the power now found in an iPhone. While he is leaning towards Web-based computing, there will be iPhone like devices that are close to where the work is being done.

- Working at making AutoCAD better at modeling the real world. I fully expect that AutoCAD 2011 will import point clouds -- a few years after MicroStation, I might add. Point clouds are the millions of 3D dots recorded by laser scanners. Said Mr Hanspal, "Where as you used to use raster scans as a backdrop to 2D drafting, you will now use point clouds for 3D background.s"

- Working at making AutoCAD better at modeling the real world more realistically. Here I was disappointed that he merely mentioned libraries of realistic finishes, such as paints and woods.

- Working at enhancing 2D drafting tools. "It's not like 2D documents are going away any time soon." Here he gave no details at all, just noting that AutoCAD 2010 had been given dozens of 2D enhancmements.  Also, Autodesk's M&E [media and entertainment] division will be adding more of their technology to AutoCAD.

That's all for today... more tomorrow.

Posted at 06:40 PM in Travelogues | Permalink

Another comment of Carl's that caught my ear at his press conference; someone asked about recent file-sharing deals between Autodesk and its competitors ProE & Bentley.

His reply went something to the effect that Autodesk are always willing to trade formats because they feel that users should have full interoperability between any software, and that file formats should be transparent to the user.