The Essential Reader: Nixon in China 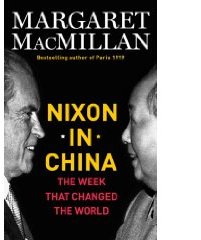 If you have ever read a book by Margaret MacMillan, then you know what you can expect from Nixon in China: intense detail, run-on sentences, and a feeling of "Didn't I read this earlier already?"

She takes up 400 pages to tell a tale that could probably have been told in a hundred. The chapters jump back and forth. We read of the arrival in China, then a backflash to events leading up to the arrival. Another day, another backflash. Coupled with pages and pages on how Nixon had no friends, unless he paid for them.

Every so often, pages are spent telling us that Nixon had to friends, unless he-- oh wait. You already knew that.

By page 193, I ground to halt in reading this book. I don't like flashbacks; I don't like run-on sentences; and I don't appreciate the effort the author makes in creaming as much detail into a single sentence as is permitted by her editor. It's downright hard work, even for someone like me who enjoys reading about history.

If nothing else, I learned that Moa was as nervous (and drugged out) as Nixon was unsure about the meeting. With Russia against both China and USA, the two leaders realized that the wall of silence needed to be broken between "us" and "them." Despite misgivings of their underlings, the men made it happen.

Thirty-seven years later, China is wobbling its way towards capitalism, and maybe one day will realize that communism is a dead-end, as did Russia.

This book is available from Amazon.com: Nixon in China

Posted at 01:05 PM in Reviews of Books | Permalink