The Essential Reader: It's Not News

It's Not News, It's Fark:
How Mass Media Tries to Pass Off C*** as News 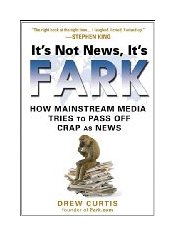 My first experience with botched reporting came when the apartment complex we were living in had a toaster-induced fire in one of its units. There was a dramatic rescue of the third-floor unit's handicapped renter by another tenant suffering from back problems.

The fire made it onto page 3 of The Vancouver Sun, and we were amazed at the many incorrect details the reporter managed to fit into a simple story. Names misspelled; details incorrectly related. This incident of 1987 made me wonder how many incorrect details we are fed each day by the news on radio, tv, newspaper, and today on the Internet.

Drew Curtis pulls back the curtain on some of the news industries's mischievous ways. These include running press releases as news items, overcovering a single story, and obsessing over blond white women with lost children or spectacular diseases.

If you have ever heard/read a news item about vacation travel ("AAA or CAA says this summer lots of cars will be on the roads"), then you are hearing a regurgitated press release. This is not news, and not worthy of being broadcast as news, because (1) people go on vacation in their cars every summer; and (2) the item is free marketing for the automobile club. Applies to PETA especially. Male reporters are always happy to "cover" near-naked chicks, and PETA knows that.

Worse are press releases that announce made-up statistics. For example, UNESCO announced earlier this year that 1.5 million refugees were in danger in some country or another. After intensive questioning by a BBC interviewer, I heard the UNESCO representative admit to making up the number. Last year's invented number had been one million; this year's had to be larger, and so they picked 1.5 million. Out of the air. Because large numbers make the news.

Mr Curtis highlights other numbers picked out of the air. (Well, he doesn't use the word "air.") There's the one about American companies losing $780 million in productivity because of the Super Bowl. Complete fabrication, but a great way to get free publicity for publicity-seeking firms.

The advertising-driven 24-hour news operation likes press releases, because they are free; in the industry, we call them "fillers."

And then there are these other annual non-news items that our ear are subjected to:

Overcoverage is where news organizations spend days on one story. My favorite was the impending non-explosion of Mount St Helens of a few years ago, where long lines of network satellite trucks boosted the local economy, but had little else to do.

Mr Curtis breaks down overcoverage to this handy timeline:

Mr Curtis also covers the irritants that grate me the most: headlines that are contradicted by the story; and journalists who can't do math. He quotes a story that claims 60% of Brits use screwdrivers, knives, and other sharp objects instead of floss on their teeth. Missing from the headline was the qualifier "at one time in their lives."

The many anecdotes makes this a fun book to read, and gives you yet another reason to cancel your cable news subscription. As for "fark," it's his word for news that isn't news.

You can purchase this book through Amazon: It's Not News, It's Fark.

Posted at 01:05 AM in Reviews of Books | Permalink

My first fark encounter was in college. The San Francisco Chronicle wanted to label the house I was living at an "Animal House" because of the movie's popularity. They sent a photographer out very early Sunday morning to capture the "beer infused aftermath" of a huge campus party we hosted the night before. Turns out everything was cleaned the night before. I watched in utter amazement as the photographer took one of the big garbage cans full beer cups and started strewing debris around our courtyard. I asked him what the hell he was doing and he said, "hey, you guys had a great party last night, huh? well, I'm just trying to re-capture a little of the excitement." I told him he should have come 12 hours earlier... and that right now all he was doing was making us look like slobs... and I made him pick it all up. Turns out he circled back a few hours later... and -- surprise -- we had a huge picture on the back of the first section of Monday's SF Chronicle under some such title like, "Animal House Rages at Stanford." I grew up with the Chronicle so it was a shock. I never would have believed it if I didn't see it firsthand.

Every news story is completely accurate. Oh, except for that story for which you happen to have first-hand knowledge. They always seem to mess up that one.

My local paper recently reported the local transit authority now has more than 100 security cameras watching train passengers. Buried further down in the article was a statement that they had 18 cameras and added 79 more.
18 + 79 = 97.

BTW "It's not news" is no news at all, at least not to Germans. If you want to know where this comes from, read old books like "Der Mann, der bei Bild Hans Esser war" by investigator/writer Günter Wallraff, 1977. There's zillions more of this. Writing about bad journalism has become sort of secondary industry to the secondary industry we call "the press".
Best wishes, and glad you nailed it at last.
Temet

The "news" channels are on 24 hours a day; and they have to fill every hour of the day with something, and most of that something is pure junk. Regardless of which one people watch those people are worse off for having watched.