Randall Newton wants to have a no-punches withheld debate on the uselessness of Twitter (ie, he considers it useful, the fool.)

At it's core, Twitter is the equivalent of passing notes during class -- in elementary school. "Tee hee hee. We're fooling the teacher with out discrete communication system."

At the psychological level, Twitter is like a drug pump that injects endorphins each time you get a hit -- er, a Tweet. "Thank goodness somebody still likes me."

Here's the part I find saddest -- when Randall is thrilled to show me he got one more follower in the past 24  hours. That's not thrilling, that's depressing. One is the loneliest number, philosophized Three Dog Night.

I did have a chuckle when he complained the Twitter search system wouldn't let people find his twitty comments. Oh dear.

Here he is, twitting instead of listening... ("I'm reporting," he sputters.) 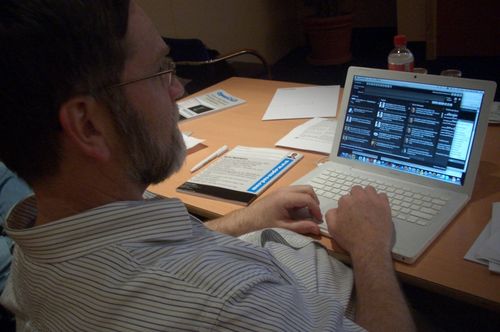 you you think that the link "titter.com" ist ok?

at least he isn't doing this. http://www.dezignstuff.com/blog/?p=569

sorry Ralph, please no hard feelings it was just to good to pass up.

Ralph, I agree with you in part. However, I must say that when you go past the common uses of Twitter for socializing and whatnot, it may be useful after all. I didn't want to believe it, but an example is my husband's company's marketing team. They don't even have an account with Twitter themselves, but they use Twitter search to find very juicy and extremely useful information about what people (customers and competitors alike) are saying about the technology they work with. See, usually people talk and they think that only those that follow them can see what they say; they don't stop to think that their conversations are being picked up by search engines and anyone else can find them and read them, as long as they know how to search for them. Bad news for them; great news for my husband and his co-workers. He always tells me that nothing is sacred anymore these days. Whatever you are looking for, no matter how confidential, you are likely to find online if you know where to search.