It's a good question.

Several prospective purchasers of my brand-new What's Inside? AutoCAD 2010 ebook today asked me, "Will this also cover LT?" I've been telling them....

The ebook includes a page about what's new in AutoCAD LT. Autodesk has been keeping fairly mum on the new features in LT, since they don't actually want you buying it.

Essentially, they "turned on" a bunch of commands that already existed in earlier releases of AutoCAD (like Align and some Xref ones), plus added PDF import/export. I wrote the details in an earlier blog posting, "What's New in AutoCAD LT 2010."

So, why buy a book about the new features in AutoCAD 2010 when there are dozens of Weblogs parroting the new feature list issued by Autodesk? Here is one reason:

This is how Autodesk's Command and System Variable History provided with AutoCAD 2010 describes the changes to the 3dMove command:

And here is the summary statement from my ebook on the changes made by AutoCAD 2010 to the same command:

Another reason: detail. Below is a screen grab of a page that describes one of the new commands, 3dScale. (Click to see the full-size image.) 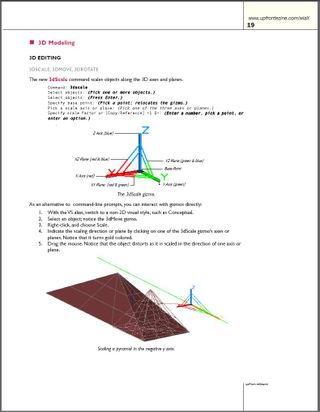 Other material you'll read in this ebook, but won't learn elsewhere:

(But, it does not cover programming issues.)

The 130-page What's Inside? AutoCAD 2010 ebook is available in PDF format for US$19.50 through its Web page at www.upfrontezine.com/wiaX .

Posted at 01:47 PM in Reviews of Books | Permalink

They finally turned on the ALIGN command in LT?

All I can say is, well it's about time. Considering it a "3D-only" command was beyond logical, to stay polite.

Worth note that they also turned OFF "LT Extender" They had to reach across the Atlantic Ocean to do this and have been threatening to send all users, past and present, of this fine little add-on, with mouse hand amputation in a public square or at least to prison for the rest of their lives. Trouble is they absolutely don't know who these users of LT EXTENDER are, so, as you know when that happens, a scapegoat must be found - round up the usual suspects. Also it is said that upgrades price will TRIPLE in price. I think I will get some stock in Rhino 3D if it is available to me, or maybe just volunteer to help them somehow for free.