The Essential Reader: The Reagan Diaries 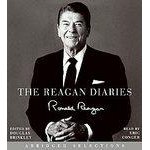 Not every word in this book is reproduced from the diaries of Ronald Reagan while he was eight years the president of the United States (Jan 1981 - Jan 1989). Large sections are summarized by the editor; once in a while, ellipsis (...) censor state secrets.

In the early months, Reagan is amazed and dismayed at what presidents get to have, or go through. There was the first evening he got to watch a television program that had been previously recorded for him. We're talking 1981, when VCRs weren't found in homes. On the irritating side, there was the bulletproof vest the Secret Service had him wear when in public.

Then, the amazing things become commonplace. Late in the book, he complains of the fog that forces them to take vehicles on the long drive to his ranch, instead of the usual quick helicopter jaunt.

Reading this book gave me an appreciation of the politics currently progressing in the United States. Reagan describes how much the president is a figurehead, rather than the be-all and end-all that the candidates and their parties make them out to be. The real power lies in Congress; the president may suggest actions, make lots of phone calls, but but then only sign them into law, or vetoes some them. He doesn't run the country; Regan's frustration with Congress is a constant theme.

Primarily, the president is a pr guy. He spends most of his day in staff meetings and meeting people. Here is part of a typical day, this one being 25 October 1988:

NCS -- A letter from Gorbachev -- his is now President as well as Gen. Sec. Soviet shuttle is going up without a crew. We never did that. E. Germany has paid no reparations to Jews who went through the Holocaust. Mujahadeen are laying siege to Kabul. We have 17 Americans in our embassy there. Japan is upset by our wanting to sell rice to them. Then brief meeting with Pres. Conte of Guinea. He's making progress on the economy. He spoke eloquently about how great our Peace Corps volunteers are. Then some desk time & at 10:30 AM I left for Fort McNair where I addressed a large crowd of mil., veterans & officials on the 5th anniversary of our landing on Grenada. Then I signed legislation making dept. of Veterans Affairs a Cabinet position.

At times, you get to peer over his shoulder as history is being made. His 26 June 1985 visit with school teachers hoping to get into space is spooky:

In East room a pleasant gathering -- 141 finalists in the competition to choose the Am. Teacher who would be 1st teacher to go into space in the shuttle come January.

We already know that the following January 28, the "lucky" teacher, Mrs McAuliffe, and six crew are killed when space shuttle Challenger blows up following takeoff.

Other times, we are left out of history, such as his Berlin trip where he called on Russian president Gorbachev to "tear down this wall." His most famous statement isn't recorded by him.

And that's the flaw with this book: eight years of diaries but little historical context; just Mr Reagan and his daily remembrances -- more notetaking than record keeping. At one point he chides himself for not writing more fully of events. Names are mentioned, but we are not sure who they are or what their importance is. A book like this needs footnotes to keep readers informed.

My wife wondered if there was any sign of his senility. Effectively none, I can report. Two or three times repeats himself, or writes that he has forgotten an item or name -- no more than what any of us would do.

He would became forcefully upset when the media misrepresented him, such as when his wife was accused of visiting a spiritualist.

This is not a book you sit and read for hours on end; it is too choppy. I read a couple pages every morning during breakfast, and that way got through the 780-page book in a year.

You can purchase this book through Amazon.com: The Reagan Diaries.

Posted at 01:13 PM in Reviews of Books | Permalink