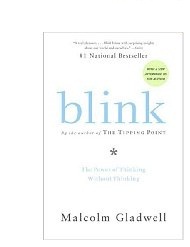 blink: The Power of Thinking without Thinking
by Malcolm Gladwell

It was 1988. The record player had been repaired. The repair depot was just blocks away, and I walked home, carrying the $400 Denon turntable in my arms. Across the street from my home, I stepped off the curb and twisted my ankle.

As I fell to the pavement, I thought the following thoughts in rapid succession (paraphrased):

"I need to protect it from being smashed on the pavement."

"I need to fall on my back so that my body can cushion the turntable."

I twisted my body, and then rolled to greet the pavement with my back. The turntable was secure in my arms, resting on my chest.

How long does it take to fall to the ground after twisting an ankle? A couple of seconds. In that time, I analyzed the problem, solved it, and carried out the solution. In the twenty years since, I have marvled often at how time slowed down for me during those coupla' seconds.

Reading Malcolm Gladwell's book, "blink," I learned that this is a common occurrence. Under great stress, some people find time slowing down for them as their minds and bodies race through solutions to the the fast-paced crisis confronting them. (For others, the opposite occurs: their minds and bodies slow down, they are unable to react, and the incident is over.)

This time-slows-down phenomenon is just one of many aspects of "blink" thinking described by Mr Gladwell through dozens of anecdotes.

The first tells of a newly discovered statue that the J Paul Getty Museum wanted desperately to prove their status as important in the museum peer group. All kinds of experts and scientific tests confirmed the authenticity of the $10 million sculpted marble. The museum paid up, but then other experts felt there was something wrong in that blink of an eye when they first laid eyes on the 2000-year-old marble.

Eventually, it was proved a fraud. For instance, the "old" look was achieved through the application of potato mold.

Mr Gladwell documents dozens of cases where "blink" thinking leads to correct -- but also incorrect -- conclusions. The "blink" impression is often correct when backed by years of experience; the impression is often wrong when made by those who lack experience, or have significant biases. For example, he cites a study that showed car dealers initially charging black men more, even though they had the same education, dress, and credit worthiness as white men. The initial impression was wrong.

He spends some time looking into figuring out just how little information is needed to come to a correct decision. For example, how much information do counselors need to determine whether a marriage will be successful? Not months worth of sessions, but just long enough to determine whether the spouses regard each other with contempt at times. Contempt is the #1 indicator of potential divorce.

His final story is of women breaking into symphony orchestras. At one time, it was the conductor's "blink" analysis that determined who would be allowed to play; typically women were not allowed, for they did not have the fortitude, according to the conductor's years of experience.

But then blind auditions came into being, where every indication of the player's identity was hidden, including that of sex. If there was the scrape of a high heel or a low-pitched cough, the auditioners were given new numbers and permitted to play again later. All that matters is the player's ability.

Mr Gladwell wonders if the same system should be used in courts of law, to eliminate the built-in bias by judges and jury of the accused. Hide the accused identifying features, perhaps by responding by keyboard through a one-way video link.

I read this book after I reading its competitor, "Think!" by Michael R LeGault. Mr LeGault condemns the "blink" thesis; I wonder if Mr LeGault finished reading Mr Gladwell's book, for he cheerfully admits that "blink" does not always work. As in my twisted ankle case, sometimes it does.

In short, snap judgments can be correct, but only when you have determined that you have a history of snap judgments that tend to be correct. After 20+ years in the CAD business, I have collected a certain amount of experience in evaluating the potential success of new business ventures. I recall the shocked look of a ceo showing me his new interactive 3D technology. I had asked him what he planned to do when his business failed, as I suspected it would. A year later, I knew it was failing, for the marketing was shifted from targeting it as an application to end users to targeting it as an API to developers.

(Here's a blink of mine: Twitter will fail, because people will tire of entering and reading brief sentences of others' usually dull lives. It seems to be failing already technologically with frequent service outages; the outages serve to alert its user base that their day can go as good, or better, without twittering.)

Perhaps the best news is that I find "blink" a far more interesting read than "Think." I gave up on "Think" about half way through; I read all of "blink" and look forward to reading his first volume, "The Tipping Point."

You can purchase this book through Amazon.com: Blink: The Power of Thinking Without Thinking

Posted at 01:39 PM in Reviews of Books | Permalink

Ralph, glad your "blink" worked out for you! I also enjoyed this book and thought the "Think!" book that followed was a bit of a cheap shot at Gladwell's well thought out thesis.

On the other hand, during your fall, had you had more time to "think", you might have calculated the potential cost of hospitals, chiropractors, time off work before landing on your back. Sacrificing the $400 turntable might have made more sense :)

Yes, I agree that instinct is often better than analysis, but sometimes not. I also agree that Twitter will fail. It's a shiny gewgaw, and other things already exist that do what it does much better.

The thesis of blink reminds me a little of the book The Inner Game of Tennis, from a few decades ago. Similar appeal to innate vision, or instinct.

My twitter take: it'll follow the path of IRC and IM -- some people will continue to use it, but it will fall out of the mainstream.

I've been thinking that there's a lot to say about forgetting about all the daily hype, and concentrating on the long term.

Here in Canada we have free health care, so it was cheaper to protect my turntable than me!