Okay, so here we were are at SolidWorks World 2009 general session. "Back in Black" is screaming in my ears. But no live blogging, since Internet access isn't generally available.

Jeff Ray begins with his "state of the community" talk, covering many topics lightly. "What gives?" is his starting line. "Don't you know there is a recession?" 4,313 in attendance. (Left unsaid: down about 200 from last year.) "For the next three days, we won't read the newspaper, we won't watch tv."

(How true, that the recession is overblown by media and politicians. The current unemployment rates are calm in comparison to the Great Recession of the early 1980s -- a time of which anyone under 40 would be unfamiliar. Both legs of my airplane flight Vancouver-Chicago-Orlando were packed full.)

Mr Ray says that SolidWorks and Dassault Systemes are working on making their software work better together. But no Charles Bernard here, unlike the press event last fall in Barcelona. And no details on how they are doing this, other than listing the names of all of Dassault's non-Catia-branded software as being in attendance at this event. 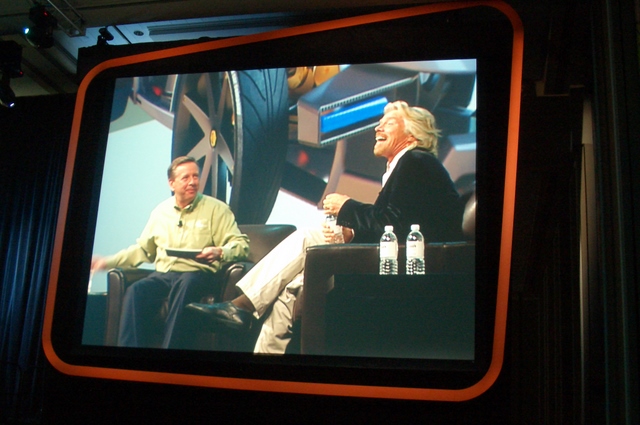 Has formed 360 companies, of which about 250 run today. He is the rare guest speaker who is actually interested in what CAD is capable of. Ray invited him to take along the 3D-printed model of a new type vertical, cylindrical windmill invented by a SolidWorks user -- a user looking for investors.

He began Virgin records when a 15-year-old played a tape of instrumental music. Seven record companies had turned him down, so Branson started the record company. Tubular Bells by Mike Oldfield.

"Working on a new kind of [baby] incubator is more important than getting drunk every night." He was fascinated by the SolidWorks-designed incubator built from spare car parts designed for third-world countries too be cheap (around $1000) and easily repairs. For example, the heaters are made from headlights, and the alarm light from a taillight.

"Listen, listen, listen all the time to what customers want." His airline was the first to have seatback video systems (which I dislike, unfortunately), and angled business-class seating that allow seats to be longer and wider.

Posted at 07:30 AM in Travelogues | Permalink

How true, that the recession is overblown by media and politicians. The current unemployment rates are calm in comparison to the Great Recession of the early 1980s -- a time of which anyone under 40 would be unfamiliar. Both legs of my airplane flight Vancouver-Chicago-Orlando were packed full.

Ralph - With all due respect, I have to say that you are seriously out of touch with reality.

Not only is the current situation not overblown, it is far worse than most realize.

For example, of the total jobs lost in this recession, half of them were lost in the past 3 months, and things continue to get worse by the minute.

The reason your flights were packed full, is simply because the airlines have been cutting the number/frequency of flights, which results in fewer empty seats, less fuel consumption/passenger, and of course, lower operating costs.

We are in the early stages of what will eventually make the great recession look like a bad day on wall street.

While small they are a zillion times better than the shared TV's or projectors they replaced. The other night on a 747 to see 380 people watching what they wanted, when they wanted, was quite magical!

"...the recession is overblown by media and politicians."

I firmly believe that much of the current recession was caused by and/or is being made worse by enough "experts" claiming that we are in or are heading for a deeper recession. As they make their predictions, companies begin laying off people in order to prepare for the recession. Meanwhiles, such layoffs contribute to the recession. The economy won't turn around until enough "experts" proclaim that the recession has bottomed out and that things are going to get bettter. At that point, things will get better.